I18 in the Annual Review

Metal ions in bone cells - where and how? In this study, world-leading ...Read More.

Scientists working to design more robust and efficient catalysts have achieved a world first with the help of powerful imaging techniques at Diamond's Microfocus Spectroscopy beamline (I18). The team, which brings together researchers from leading chemical company BASF, Diamond and the UK Catalysis Hub, has successfully revealed the molecular level chemical structure and location of catalysts during operation in the liquid phase. This research, which has been published in the journal Angewandte Chemie International Edition, opens the door to further investigation into imaging catalyst active sites under a wider variety of operating conditions including high temperatures and pressures.

Catalysis is at the heart of the chemical industry, which is an extremely important part of the UK economy generating in excess of £50 billion per annum. Researchers from academia and industry who are working on the major fundamental and conceptual challenges in the field of catalysis are increasingly turning to powerful national research tools, such as those available at Diamond, ISIS, the pulsed neutron and muon source, and the Central Laser Facility, all of which are located on the Harwell campus in South Oxfordshire.

Identifying the active site of a catalyst under operating conditions is one of the key goals of catalysis research. These latest findings prove that a combination of microfocus X-ray imaging techniques can identify the active site during operation. The research team demonstrated this by performing the first chemical imaging study in the liquid phase. Prof Andy Beale, Principal Investigator from the UK Catalysis Hub and EPSRC Fellow at UCL, comments, “This collaborative project aims to develop capabilities in multimodal chemical tomography performed under relevant reaction conditions. Our results represent something of a first in that we performed a chemical imaging experiment on a solid catalyst catalysing a reaction in the liquid phase - this type of catalytic reaction is rarely studied despite its industrial importance - mainly because it is technically challenging. Furthermore we obtain a more realistic picture of the active state of the catalytic material which allows us to rationalise why it is so well suited to what it does."

The tomography study was performed on Diamond’s Microfocus Spectroscopy beamline (I18) using the commercially available catalyst NanoSelectTM, supplied by BASF. NanoSelectTM is a lead-free catalyst used in hydrogenation. The beamline provides the flexibility to position multiple detectors around the sample to collect all of the characterisation data needed. The ability to focus the X-rays down to 2x2 µm gave the resolution needed to image particles smaller than 100 µm.

A combination of microfocus X-ray Fluorescence and X-ray Diffraction Computed Tomography (μ-XRF-CT and μ-XRD-CT) identified that the active state of the platinum (Pt) catalyst – the structure responsible for the reaction – was dispersed nanoclusters of Pt, and not in crystalline form. This helped to explain why the catalyst was so active, but also demonstrated the effectiveness of the method for preparing the catalyst. 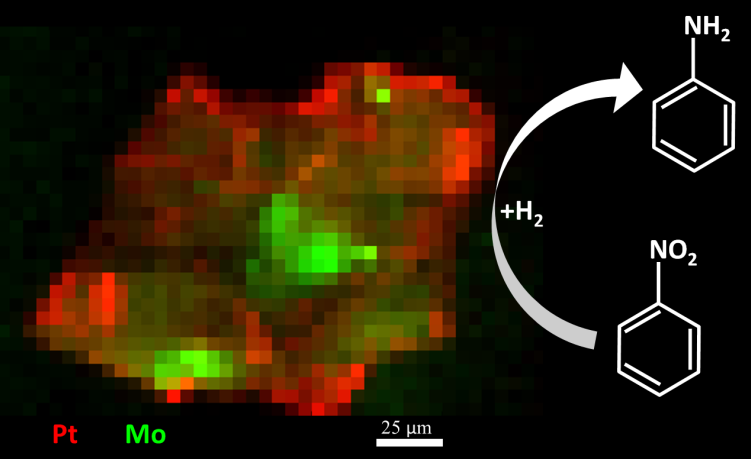 Orthogonal XRF maps (at 20.3 keV) of a particle under operating conditions (ethanol, 22.3 mMol nitrobenzene, and 1 bar H2) after collection of µ-XRF-CT and µ-XRD-CT sinograms. Elemental distributions throughout the carbon support are shown in red (Pt) and green (Mo). Each pixel is 5x5 µm. (Price et al., 2015)

Whilst a few small platinum crystals were detected on the support, the overwhelming majority was non-crystalline. Had the catalyst been measured by a bulk technique, the conclusion as to the active state would have been quite different. Previous ‘bulk’ characterisation techniques allow for the identification of different elements and chemical structures present in a sample, but cannot readily tell the location of the different structures. The tomography techniques can identify not only the nature but can map the location of the different chemical structures within a sample, which is important as catalysts can have the same chemical composition but be deposited on a support in a variety of different ways, leading to changes in how active/selective the catalyst is.

Prof Beale explains, “The advantage offered by single-particle μ-XRD-CT is that whilst a small amount of crystalline Pt is detected, the vast majority of Pt species, determined in combination with μ-XRF-CT, is too small to diffract coherently, and therefore alters the conclusion such that the active catalyst is not crystalline nanoparticles but Pt nanoclusters.”

Dr Peter Witte, BASF Research Chemist, adds, “We started the collaboration with Diamond and the UK Catalysis Hub in order to get a better understanding of the metal distribution in our catalysts. The 3D imaging that has been performed at Diamond has shown us clearly where the Pt and Mo metals are located in our NanoSelectTM catalysts. The NanoSelectTM catalysts are special, since they contain an organic stabilizer around the Pt metal. We expected that the Mo promoter would coordinate to this stabilizer and that the close proximity of the Pt and Mo metals were responsible for the good performance of the final catalyst. The current work clearly shows that the Pt is situated very much on the outside of the support particle, while the Mo is almost exclusively present inside the pores. This indicates that a close contact of these two metals is not needed in order to obtain a high performance.”

Dr Witte continues, “Imaging a working catalyst gives even more information on the exact working mechanism of the metals and stabilizer. For such imaging, it is important to use conditions that are close to the working conditions of a commercial catalyst. These catalysts are most often used in fine chemical applications, which are typically run in liquid phase at mild conditions. The current work shows that the stabilizer is removed from the metal surface under reaction conditions. It is most likely that different results would be obtained if this catalyst were to be imaged under (unrealistic) gas phase conditions.”

Dr Stephen Price, PDRA on the I18 beamline and lead author on the research, comments on the facility’s drive to support researchers working on catalysts: “Here at Diamond, we are developing the imaging capabilities with a focus on catalytic systems as catalysis is one of the most important chemical industries in the world.”

Price, S. et al. In Situ Microfocus Chemical Computed Tomography of the Composition of a Single Catalyst Particle During Hydrogenation of Nitrobenzene in the Liquid Phase. Angewandte Chemie (2015). DOI: 10.1002/anie.201504227