I05 in the Annual Review

Fundamental gains for a spintronic future

An international team of scientists have recently published results in Science Advances that bring us a step closer to the reality of ultra-efficient chip technology. The team used angle-resolved photoemission spectroscopy (ARPES) to investigate energy states at the surface of a semiconductor – bismuth telluride iodide, or BiTeI - prized for its exceptional electronic properties and earmarked as a potential microchip material.

By performing ARPES experiments on the surface of BiTeI at Diamond’s ARPES beamline (I05), the research team was able to study how the electrons move in this semiconductor, and how this is related to their spin. Studying this behaviour can identify how spin polarisations can be controlled, which in turn opens up the huge potential for new quantum technologies to be developed.

Lewis Bawden, PhD student at the University of St Andrews and lead author of the study, explained the fundamental premise of the research: “We aimed to shed new light on the Rashba effect - this is known to split electronic states according to the spin of the electrons and has promising applications in spintronics.” The concept might sound complicated, but is straightforward - whilst generic materials interact with a magnetic field by splitting into two distinct energy states of electron spin through the energy gained or incurred through alignment, the Rashba effect offers a way to ‘cheat’ the system into mimicking such a dichotomy without ever invoking a magnetic field.

Experimentalists must harness an elusive quantum mechanical interaction known as spin-orbit coupling. “This is a coupling of the electron spin to the motion of electrons in the solid” explains Dr Phil King, Royal Society University Research Fellow at the University of St Andrews, and the team’s principal investigator. Relativity dictates that in the rest frame of individual electrons, the presence of an electric field can be felt as a magnetic field, leading to that sought-after energy state splitting. Crucially, however, this causes very small changes in most materials, where it is also often limited to their surfaces.

By organising themselves in highly intricate patterns of motion, electrons within the bulk of the semiconductor BiTeI host a giant version of this effect. Harnessing this could potentially greatly minimise the waste heat emissions associated with classical logic systems involving a flow of charged electrons. So what would a spintronic upgrade for computational devices mean? “You’re effectively using the spin of the electron as your information carrier rather than the charge and you could in principle do this in a much more energy efficient way than in a normal transistor” asserts Dr King.
Overcoming the obstacles
This highly ambitious venture from theory to technology is not without significant obstacles ahead: “it’s a huge engineering challenge… there are transistors in laboratories now which show some modulation based on (spintronic) behaviour, but you currently need to keep everything at very low temperatures to make this work” King continues. However, the excitement currently gripping the field is undeniable. “If we could gain the sort of control both at the level of the materials and at the level of engineering needed to make that work, then this could really open up a lot of possibilities for new types of electronics”.
In ARPES, the kinetic energy and angle of photoelectrons emitted from the sample is measured following illumination with monochromatic light. One particular feature of the I05 setup exploited during the study was to map the intensity distribution of these photo-emitted electrons, and the dependence of this when the sample was rotated with respect to the incident beam. The team then analysed their photoemission data measured with a variety of polarisations - horizontal, vertical, or circular – and, together with theoretical calculations, were able to infer a range of quantum mechanical properties such as symmetry of atomic orbitals, and their relationship to spin-splitting in the BiTeI system.
Disentangling the data
Perhaps the greatest challenge faced by the scientists was the pure scale of data the ARPES technique generated and the task of making sense of the patterns found in terms of the electron arrangements. “It provides an enormous wealth of information that has to be disentangled… the strength of this work is they managed to disentangle the information in very great detail” explains I05 principle beamline scientist, Moritz Hoesch. “A material like (BiTel) will have many electrons per unit cell of the material that are relevant, and you can see the pattern of motion of all of them”.
While Diamond’s high intensity of the beam and the excellent mechanical precision were critical, the advanced software integration and scripting possibilities were also important to allow acquisition of the vast dataset, ultimately allowing the team to tease out the intrinsic, fundamental physics in the complex results. Voicing his confidence in these experimental methods, Hoesch asserts that “by having a very large dataset, where in some parts one aspect is more visible, and in others it is another aspect, they could really nail it down”. 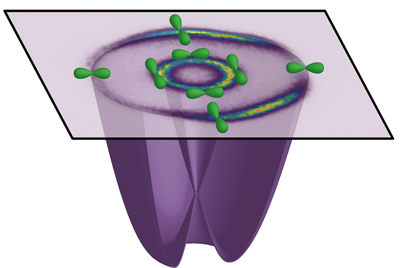 ARPES measurements of the Fermi surface of BiTeI, accompanied by a schematic representation of the electronic structure and corresponding orbital textures resolved for inner and outer spin-split branches of this model Rashba system (Bawden et al, 2015)
Collaboration on the beamline
The experimental process also brought a fruitful exchange of ideas between external researchers and beamline scientists. Hoesch recounts how during their initial training sessions running up to the experiment, unexpected and creative data acquisition techniques were put forward by the research group. In other instances, Hoesch’s own experience contributed a vital technical addition - such as performing higher order suppression in the photon beam for considerable observational improvement. “Together we had a good exchange of ideas until we had the perfect settings required for the relevant data”.
The experiments conducted here hold the vanguard in a convergence of disciplines – materials science and engineering, condensed matter physics, quantum chemistry and technology all have something to contribute to the discussion. A crowded scene such as this requires sound support from I05’s beamline science staff. It is apparent from the researcher’s feedback that this kind of service is being provided. “Fantastic, as always” King recalls. “This was in fairly early days for the beamline, but already at that stage it was performing exceptionally well. This is testament to the beamline staff who are working very hard to deliver an exceptional working photoemission facility”.
Research gaining momentum
The gains from this study are truly fundamental and contribute to a burgeoning field that in the last few years has seen huge leaps towards fully realised spintronic technology. Advances in novel techniques of creating these Rashba-type spin textures, and compounds such as the eponymous BiTeI, mean that the quantum processes can play out within the bulk material rather than remaining isolated and hard to access at metallic surfaces.
And so, a final word from the scientists behind the wheel of spintronics. “What we were doing here was trying to learn more about the delicate interplay between the spin and the orbital degrees of freedom in solids. This is so we can understand more about the fundamental microscopic origins of these giant Rashba systems, and begin to develop better strategies to control them” concludes Dr King. Dr Hoesch adds, “This research forms a solid basis for the detailed development of using the Rashba effect for transistors. It’s a very solid stepping stone and confirms to the community of researchers that all these effects are real and they do exist in real materials.”
To find out more about using the I05 beamline, or to discuss potential applications, please contact Principal Beamline Scientist Moritz Hoesch: moritz.hoesch@diamond.ac.uk

ARPES measurements were performed at the CASSIOPEE beamline of SOLEIL synchrotron (France) and I05 beamline of Diamond Light Source (UK).