Could volcanoes have caused extinction of the dinosaurs?

Volcanic gases can have devastating effects on the Earth’s environment and the life it sustains. Measurement of the contents of these gases can provide information about the possible impact that eruptions have on a region and the biodiversity which remains afterwards. Scientists collected X-ray fluorescence data at Diamond Light Source in developing a new method for determining sulfur contents in basaltic magmas by measuring sulfur concentrations in clinopyroxenes. The research showed a distinction between magma from differing regions, which could provide clues about the link between high sulfur content in eruption material and mass extinction events in history, like those during which dinosaurs were wiped out. 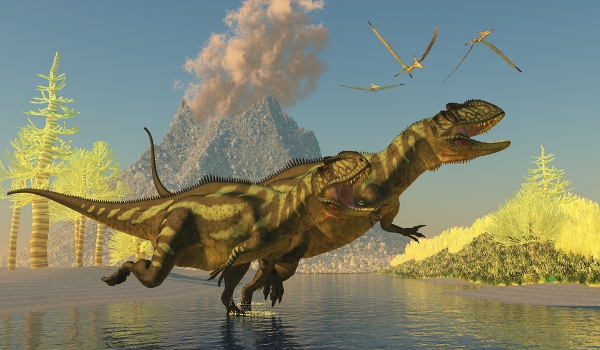 The collaboration between the universities of Padua, Trieste, and Siena in Italy, McGill University in Canada and University of Lyon 1 in France, was interested in the relationship between the geologically rapid creation of 1 x 106 km3 of lava from massive volcanic eruptions (Large Igneous Provinces or LIPs) and major extinction events in Earth's history. Professor Don Baker of McGill University said: “In many cases these LIPs are associated with extinction events, and others have hypothesised that sulfur, carbon dioxide and halogen gases emitted during the volcanic eruptions were responsible for the extinction. As not all LIPs are associated with extinction events, we wanted to find a way to estimate the release of sulfur from LIPs in the past in order to better understand their role in mass extinctions.”

The researchers worked with Dr Kalotina Geraki at the Microfocus beamline (I18) at Diamond by using synchrotron X-ray fluorescence (SXRF) to measure sulfur concentrations in silicate crystals from three different LIP events. Two of these, the Central Atlantic magmatic province (CAMP) in Europe, Africa and the Americas, and the Deccan Traps in India, are associated with major extinction events, in contrast to the third, the Paraná-Etendeka LIP in South America and Africa, which has no associated extinctions. Previous estimates of sulfur content in LIPs involved analysis of melt inclusions and comparison with volatile concentrations in degassed groundmass glass, which cools too quickly after eruption to form crystals. These melt inclusions are extremely rare and when the melt inclusion is recrystallised, the equilibrium can be disturbed, leading to questions over the validity of such results. This novel method, published in Geology, determines the sulfur concentration by measuring the sulfur content in the common mineral clinopyroxene and by determining and applying the partition coefficient (KD) between clinopyroxene and the magma with which it is in equilibrium. 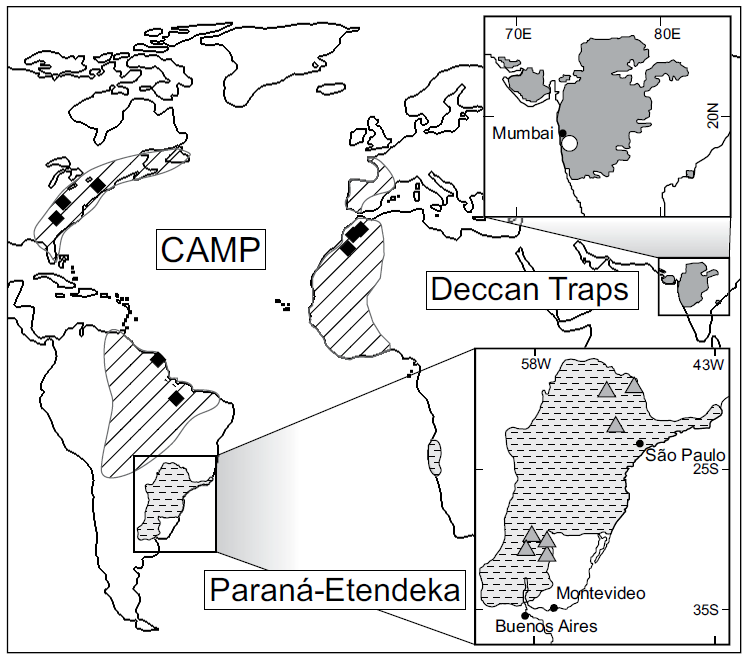 42 natural augites from 22 basalts (12 from CAMP, 8 from Paraná and 3 from Deccan) were selected from a sample suite of over 500 rocks to ensure a volumetrically and chemically representative study of rock types found in the LIPs. According to Dr Sara Callegaro from the University of Padua, mX-ray fluorescence with a small spot size and low detection limits was required for measurements. She says “The I18 beamline could guarantee a 6 µm spot size and a detection limit of 3 ppm for sulfur, coupled with an easy sample preparation and a fast routine for the sample changing.” The team used a lower energy range on I18 for this experiment, with the beamline capable of producing a 2 µm spot at higher energy. The data obtained for samples from CAMP and the Deccan Traps contained high magmatic sulfur concentrations, up to 1900 ppm, whereas basalts from the Paraná-Etendeka LIP has substantially lower magmatic sulfur concentrations of less than 800 ppm.

The results show a positive correlation between the sulfur concentrations in Large Igneous Provinces and their environmental impact. This is consistent with a sulfur dioxide-driven ecosystem perturbation that caused environmental effects such as soil acidification and atmospheric damage, which may have had an influence in the mass extinctions at the end of the Triassic and Cretaceous periods. Dr Callegaro surmises “This research shows that changes in the sulphur atmospheric load may have a forcing role on Earth’s global climate and, in particular, negative effects on the biosphere. We aim to further constrain the mineral/melt partition coefficient for sulfur by investigating its potential correlation with the melt composition, with the oxygen fugacity, and with the water content of the melt.” The team also plans to extend the study to other Large Igneous Provinces in a bid to explore the effect of sulfurous emissions, and to determine whether past mass extinctions should act as a precautionary note to limit present-day sulfur emissions.
For more information on beamline I18, or to discuss potential applications, please contact Principal Beamline Scientist Fred Mosselmans: fred.mosselmans@diamond.ac.uk.