Defect control at the nanoscale

Diamond Light Source’s Extreme Conditions beamline (I15) has been used to discover defect nanoregions within metal-organic framework (MOF) materials. A combination of techniques, including diffuse scattering and anomalous X-ray scattering, was used to develop a microscopic picture of correlated vacancies in the canonical hafnium terephthalate MOF, UiO-66(Hf).

Correlated disorder and defects are ubiquitous in functional materials, playing a crucial role in fast-ion conductors, ferroelectrics and even superconductors. The possibility that defects might arise in the chemically versatile family of MOFs has become appreciated only very recently. But if scientists are to exploit these defects and develop MOFs with new functional responses, it will be necessary to control and understand the interactions between defects in MOFs. It was recently discovered that UiO-66(Hf) contains a large number of missing ligand defects, especially when synthesised using additional acid. Collaboration between groups at the University of Oxford, Stockholm University and the CNRS, Paris, together with researchers at Diamond and ISIS on the Harwell site, sought to improve the structural modelling of defective MOFs by studying the disorder in UiO-66(Hf). 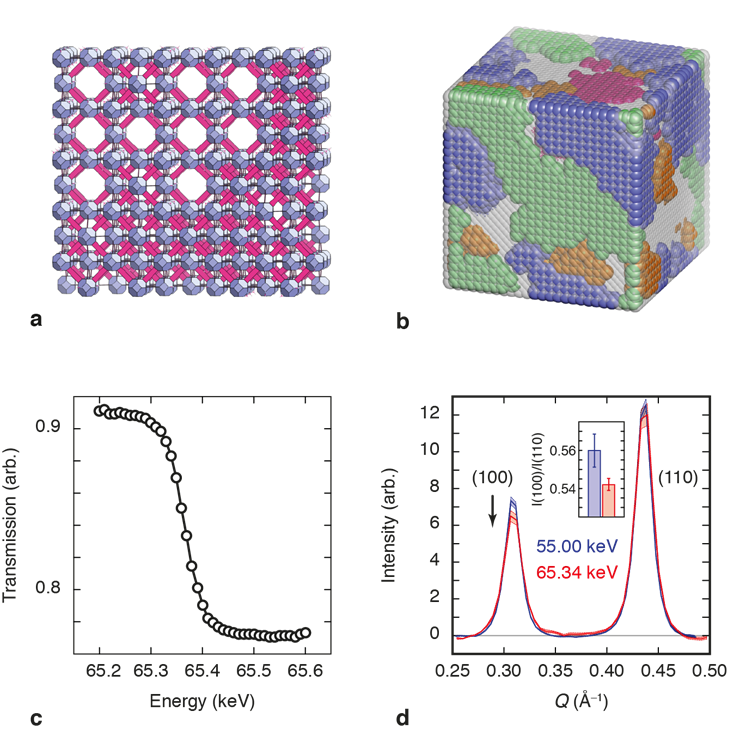 a) A section of the model of UiO-66(Hf) containing defect nano-regions. The metal clusters are represented as blue polyhedra, and the terephthathlic acid linkers are pink rectangles. b) There are four different kinds of defect nano-regions possible in defective UiO-66, each corresponding to one of the four ways of breaking the face-centering. The four different kinds of nano-region are coloured in four separate colours. c) To measure the anomalous scattering, first the Hf K-edge was located using the sample of UiO-66(Hf). d) Powder X-ray diffraction patterns both at the edge (red) and well away from the edge (blue). The inset shows the change in relative intensity of the (100) peak compared to the (110) peak and this indicates that these peaks have a substantial contribution from Hf.

Powder diffraction data revealed additional broad peaks that broke the symmetry of the ideal, non-defective UiO-66 at very high defect concentrations. The width of these peaks implied that the defect structure in this material is not long-range ordered, and their presence at specific symmetry-forbidden positions means they must result from a correlation of lower symmetry. Structural models showed that unlike in previous examples of defective MOFs, missing-linker defects alone could not explain the extra features in the diffraction data. However, the observed diffraction pattern could be accounted for by incorporating correlated hafnium cluster absences into the model.

To confirm the proposed model of correlated hafnium cluster absences, a range of experiments was performed, including, crucially, low-angle anomalous Hf K-edge scattering measurements carried out at I15. The beamline offers the opportunity to analyse powders and single crystals using very high-energy X-rays with a versatile set-up. According to Heribert Wilhelm, Principal Beamline Scientist on I15, “these technically-challenging X-ray diffraction experiments were carried out at a combination of high energy (65.5 keV) and low Q (0.3 Å-1).” As lead author Matthew Cliffe, from the University of Oxford’s chemistry department, explains: “I15 has been used to reveal element-specific details deep within a metal-organic framework, by using the combination of tuneable high energy X-rays and flexible detector setup offered by this instrument.” He continues, “we were able to provide convincing evidence that scattering from hafnium contributes to the symmetry-breaking diffuse scattering, demonstrating that UiO-66 does contain correlated hafnium cluster absences.”

This is the first reported example of correlated defects in a metal-organic framework, and the presence of correlated defects in such a well-established framework material suggests that they may be a common feature in the chemistry of MOFs. These correlated defects have important implications for the properties of such materials, from mass transport, gas sorption and mechanical properties to the effect on rigidity and charge ordering, which dictate electrical, optical and magnetic functionality. It is hoped that this discovery will motivate further investigations into correlated disorder of MOFs, as a greater understanding of the structure from which functionality arises presents an opportunity for nanoscale control over defect correlations, and, consequently, a method of property optimisation.