Data gathered at the Diamond Manchester Imaging Branchline of beamline I13 have been used to gain a better understanding of lithium battery failure. The collaboration between the University of Manchester and Diamond Light Source used X-ray in-line phase contrast imaging to investigate the growth and structures of lithium deposits, termed ‘moss’, in lithium battery cells. The resulting publication details groundbreaking research by reporting in-situ phase contrast tomography in a liquid environment. 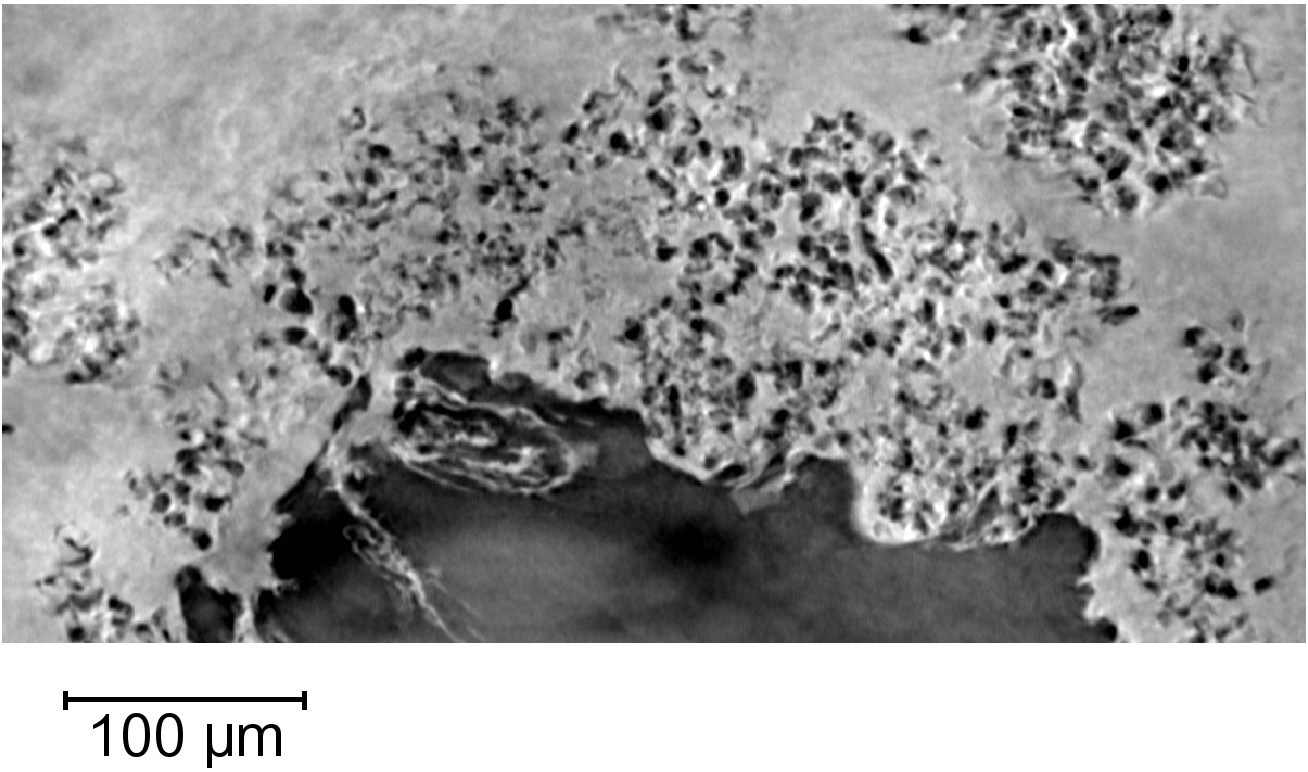 Virtual slice through a reconstructed image from a tomographic scan of the lithium moss electrodeposited on top of a lithium electrode.

Lithium-ion batteries provide high power and energy densities, with cells containing pure lithium electrodes theoretically offering the highest energy density. However, the electrodeposition of metallic lithium microstructures in lithium batteries is a principal cause of their failure due to overheating. The development of lithium batteries is particularly important for applications requiring high efficiency and long battery life, such as for electric cars, where safety is paramount. High current-drain rechargeable items increase the probability of metallic lithium deposits, leading to concerns over short-circuiting, fires, and battery failure.

By studying the growth and structures of the lithium deposition, the team hoped to obtain a better understanding of the link between microstructures and failure mechanisms or battery life.

Previous research into electrodeposited lithium has predominantly involved two dimensional optical and electron microscopy, which can provide only limited information about the complex three dimensional structures that form. Furthermore, microscopy techniques typically require removal from their as grown environment. Dr David Eastwood, one of the lead authors on the project, clarifies why the Diamond Manchester Imaging Branchline (I13-2) was critical to the study: “I13-2 provides X-rays of the right energy to image very low density materials, with lithium being the least dense metallic element. We have reported the first in-situ characterisation of electrodeposited lithium.”

Animated 3D surface rendering of a cropped region of the bulk lithium electrode with the high surface area lithium salt deposits in pink.

Traditional laboratory X-ray tubes give very weak contrast images for lithium metal and its compounds due to its low density. Using synchrotron radiation to deliver a high flux monochromatic 19 keV beam permits high resolution imaging by optimising contrast between lithium and the surrounding electrolyte and cell components. The team collected 1,801 projections, each lasting one second, during a 180° rotation.

Dr Eastwood, who is based at the Manchester X-ray Imaging Facility, said: “This non-destructive technique allows a spectrum with a high signal-to-noise ratio to be collected in a fast time, providing intricate details about the microstructure of lithium moss.” When the cell was cycled at a constant current, more highly attenuating dendritic structures form, corresponding to regions of higher electron density due to the incorporation of higher atomic number elements. The detection of these proposed high surface area lithium (HSAL) compounds demonstrate the potential of X-ray micro-tomography to distinguish between elemental lithium and light compounds.

The improved spatial resolution of ~1 μm presented in these results demonstrates the ability to discriminate between dendrite morphologies, metallic lithium and HSAL desposits. These observations allow the failure of lithium batteries to be more fully understood, facilitating greater safety and an extended lifecycle, which are considerations of particular relevance for fully electric vehices. Further studies to anaylse the process of microstructure growth are underway, with the eventual aim of controlling the growth of material or influencing its shape. The Diamond Manchester Imaging Branchline provides a powerful tool for the study of lithium structures at a micrometer resolution, allowing differentiation of growth mechanisms otherwise hidden to destructive statistical or two dimensional techniques.