A collaborative team comprising researchers from institutions in the UK, France and Switzerland has used the ARPES beamline (I05) at Diamond to characterise an iridium oxide compound for potential applications in unconventional superconductivity. Iridates of the Ruddlesden Popper series Srn+1IrnO3n+1 share key properties with parent compounds of copper oxide superconductors, therefore investigation of the quantum properties of iridates is of interest to determine their potential as superconductors.

The angle-resolved photoemission spectroscopy (ARPES) beamline at Diamond produces an intense and highly monochromatic beam of ultraviolet radiation. The measurement of the photoelectrons excited by this light results in energy versus momentum maps giving information about band dispersions and the electrons near the Fermi level. This enables the study of strongly correlated electron systems where Coulombic interactions cause non-classical properties. Research leader Professor Felix Baumberger, who works at the University of Geneva, the Swiss Light Source and the University of St. Andrews, said that the study concerns the question “How does metallic conductivity emerge upon chemical doping of the correlated insulator Sr3Ir2O7?” Prof Baumberger was part of the first group of users on I05, which he proclaims to be “arguably the world’s best facility for high-resolution electronic structure studies.” 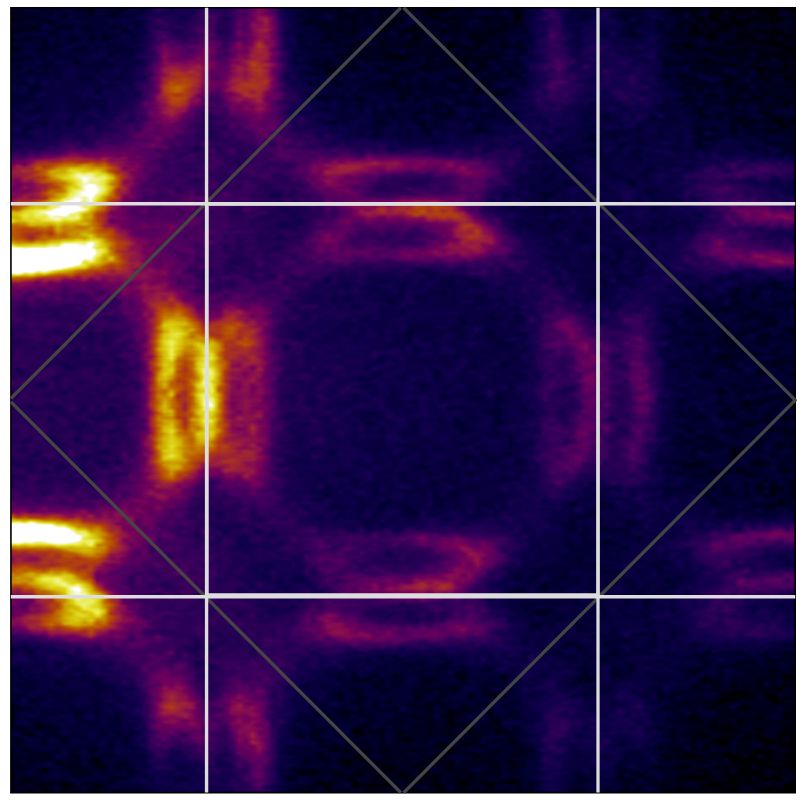 The Fermi surface map of La-doped Sr3Ir2O7 measured by ARPES.

Based on conventional thinking, Sr3Ir2O7 would be expected to be a good metallic conductor because it has a single hole with an extended 5d atomic wave function per iridium site, analogous to elemental copper with its extended 4s wave function per copper site. However spin-orbit coupling due to the heavy iridium ion, along with moderate electron correlations, causes an insulating ground state with similar properties to parent compounds of copper oxide high-temperature superconductors. Superconductivity in these copper compounds results from electron doping, yet when doping Sr3Ir2O7 by substituting lanthanum for strontium, superconductivity does not occur. Instead, using ARPES studies, it was found that in the series (Sr1-xLax)3Ir2O7, where x is the La concentration, a weakly-correlated, highly coherent Fermi liquid-like metallic state forms.

The photoelectrons ejected from the sample surface can give direct insight into the electronic states in crystalline solids because the energy and momentum are conserved. Determining characteristics of Fermi surfaces, which are abstract boundaries in reciprocal space, can aid in predicting the electric and magnetic properties of metals and semiconductors. The data indicate that the La-doped iridate shows highly coherent electronic states forming closed electron-like Fermi pockets. This is fundamentally different from cuprates, where the first doped carriers have little resemblance with ordinary electrons or holes and form open ‘Fermi arcs’.

The ARPES results in conjunction with LDA+SO+U calculations, which are published this month in Physical Review Letters, draw the conclusion that the Fermi liquid-like electronic state can be described qualitatively by a shift in chemical potential into the unoccupied states. The suggestion is that every La ion contributes one electron to the Fermi sea and that the ARPES data represent the bulk electronic structure of the material. Interpretation of the origins of property differences between iridates and cuprates is outlined by Prof Baumberger: “The dramatic difference between the doping dependence of cuprates and bilayer iridates is due to subtle differences in the crystal structure and the symmetry of the involved orbitals. This causes an insulating ground state in Sr3Ir2O7 that is closer to a correlated semiconductor than to the Mott-insulating ground state of undoped cuprates.” Following on from these measurements, the next step in the investigation will be to determine whether electronic states in other iridates are truly analogous to cuprates, in the hope that superconductivity can be engineered in doped iridates.

For more information on the ARPES beamline I05 or to discuss potential applications, please contact the Principal Beamline Scientist Moritz Hoesch: moritz.hoesch@diamond.ac.uk