The latest published paper using data from the Multimode InfraRed Imaging and Microspectroscopy (MIRIAM) beamline (B22) at Diamond Light Source has shown how far InfraRed (IR) radiation can be used to understand water interaction with protein systems at the molecular level.
Although water may seem extremely commonplace, there remain a large number of unknown details as to how it interacts within biological systems. One such example is to what extent are water molecules surrounding a protein molecule in solution different to bulk water? Protein hydration has biochemical relevance, as the H2O molecules interact with the protein conformation and contribute to its multifunctional role and dynamics.
The MIRIAM beamline routinely operates for infrared microspectroscopy in the mid-IR or  fingerprint region, i.e. where a one-to-one molecular-bond to IR-band correspondence applies. Recently, however, it has pushed its capabilities beyond the millimetre wavelength limit: this is commonly referred to as THz spectroscopy. “The term ‘THz gap’ denotes the difficulty of both generating and exploiting scientifically the electromagnetic radiation between what is commonly referred to as microwave and infrared,” explains Gianfelice Cinque, Principal Beamline Scientist for MIRIAM. “Since the turn of the millennium, interest has surged in spectroscopy studies at such frequencies because of new instrumentation capabilities.”
The broad spectrum of synchrotron radiation offered by Diamond can boost the longest wavelength emission in the millimetre region by operating the synchrotron in a dedicated mode, referred to as low alpha mode. This allows coherent synchrotron radiation to be emitted in the THz region as an intense photon flux which allows absorption measurements through relatively thick or highly absorbing materials. “We’re able to perform measurements in a 20 μm thick liquid cell filled with water and with low concentration (mM) of a protein,” continues Gianfelice, “which may not sound like much, but to do this over the wide infrared spectrum through one of the most absorbing IR materials like water is unique." 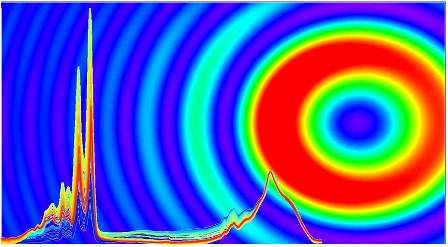 Coherent Synchrotron Radiation from the MIRIAM bending magnet source at Diamond: the false colour intensity map shows the simulated hollow cone emission of the edge radiation at 1 THz. Bottom left: the variability of mid-IR spectra of e.g. single cells as measured under the IR microscope at MIRIAM

The first life sciences paper published using THz spectroscopy at Diamond investigated the absorption of bovine serum albumin (a well known and fully characterised protein) in water. The researchers resolved the controversial findings of two previous papers in the field by independent groups which had used THz-time domain and p-germanium laser systems. Using MIRIAM they were able to confirm the observations regarding the nonlinearity in the absorption of terahertz radiation with protein concentration. “The population of water molecules in immediate vicinity of the protein has different IR absorption compared to bulk water due to the change in hydrogen bonding dynamics following water-protein interaction,” explains Gianfelice. The hydration layer mean thickness was finally estimated to be around 15 Å. This challenges the models for hydration water being limited to a single tightly bound layer of water, but supports the idea that “there is no rigid shell of water around a protein molecule, but rather there is a fluctuating cloud of water molecules that are thermodynamically affected more or less strongly by the protein molecule” originally proposed by Serge Timasheff.
MIRIAM offered the researchers the ability to perform absolute IR absorption measurement of such samples quickly, reliably and by the same set up from the mid-IR to the THz range. “It is a significant asset in experimental research,” says Gianfelice, “ and especially in the THz gap to avoid systematic errors which can arise when different measuring instruments or sample environments are used.”
This collaborative research including Diamond, the University of Sheffield, the University of Queensland, Australia, and the University of Cambridge, has shown that the THz spectroscopy method by coherent synchrotron radiation is a mature technique, which will be used more regularly in the future. “This will become an exciting new instrument in the scientist’s toolbox,” Gianfelice concludes.

To find out more about using the B22 beamline, or to discuss potential applications, please contact Gianfelice Cinque: gianfelice.cinque@diamond.ac.uk