The chilling effects of interface feedback

The chilling effects of interface feedback

A European collaboration of scientists from the UK, Spain, Italy, France and the Ukraine has used interfacial strain to drive large temperature changes in thin magnetic films. Their results, published this week in Nature Materials, pave the way for further studies and R&D, with the potential to deliver environmentally friendly, energy-efficient refrigeration in both domestic and industrial appliances.

The magnetocaloric effect, which forms the basis of magnetic refrigeration, relies on large thermal changes being driven by magnetic fields. The origin of large effects lies in a coupling of magnetic and structural degrees of freedom so that magnetic phase transitions can drive crystal symmetry changes and vice versa. However, such an interconnection is intrinsic to only a handful of materials so there is a growing need to engineer these effects rather than discover or tune them. BaTiO3 (BTO) is a ferroelectric material that undergoes a rhombohedral to orthorhombic structural phase transition at ~200 K. By growing magnetic La0.7Ca0.3MnO3 thin films on BTO substrates, the scientists were able to create an interface that allowed the structural phase transition in the BTO to be driven by a magnetic field which in turn influenced the magnetic structure of the LCMO film via a feedback loop. This allowed a giant and extrinsic magnetocaloric effect to be generated in the LCMO/BTO system by modifying the magnetic structure of the LCMO film. 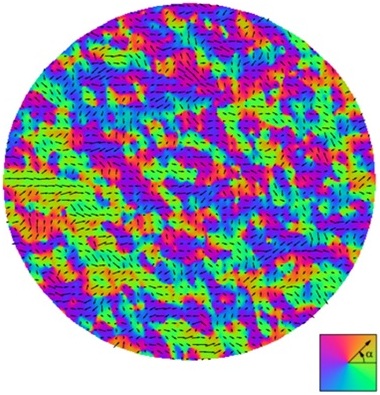 Vector magnetisation map of the magnetic domains present in the LCMO/BTO film at 150K. The colour wheel indicates the direction of the local magnetisation. The changes in these magnetisation maps, with temperature, were used to understand the microscopic origin of the giant magnetocaloric effect.
The team carried out experiments at Diamond, the UK’s national synchrotron science facility, on the Nanoscience beamline (I06), which produces an intense source of circularly polarised x-rays to generate magnetic contrast in a PhotoEmission Electron Microscope (PEEM). In order to understand the microscopic origin of the magnetocaloric effect, precise magnetisation vector maps were built up using the PEEM. The team were able to clearly demonstrate that changes in the BTO substrate symmetry resulted in large areas of the LCMO thin film transforming from magnetic to non-magnetic during the structural phase transition.
Prof. Sarnjeet Dhesi, Principal Beamline Scientist for I06, explains “The PEEM allowed the magnetic domain structure in the LCMO films to be imaged at the nanoscale and the results showed that some areas of the film became paramagnetic as the structural phase transition in the BTO progressed. The combination of an intense source of polarised soft x-rays and a state-of-the-art PEEM gives incredible insights into these new forms of material and allows a fundamental understanding of new and important phenomena.”
Dr. Neil Mathur, from the University of Cambridge, adds “Now that we know that giant magnetocaloric effects can indeed be created via interface engineering, we are in a strong position to search for these effects in a wide range of magnetic materials. The PEEM on beamline I06 has had a major impact on the understanding of the materials we study and we look forward to more success with the facilities available at Diamond.”