The semaphorin-plexin system: a structural and functional analysis of cell guidance

The semaphorin-plexin system: a structural and functional analysis of cell guidance

The intricate wiring of the human brain requires cell surface signalling systems to guide the growing neurites to their correct locations. Indeed, the development and homeostasis of tissues throughout the body is founded on cell guidance systems. The semaphorins constitute one of the major families of cell guidance cues and with their cognate receptors, the plexins play central roles in diverse physiological processes ranging from cell migration, angiogenesis and neural connectivity to regulation of immune responses. Conversely, dysfunctional semaphorin-plexin signalling is implicated in tumour progression. We and others had previously determined the crystal structure of the sema domain, the N-terminal domain characteristic of semaphorins and implicated in plexin recognition, but until recently the structures of the plexin ectodomain and semaphorin-plexin complexes resisted characterisation. We have now reported the crystal structures of the semaphorin-binding region of the plexin ectodomain in isolation and in complex. The capabilities of third generation synchrotron beamlines played a critical role in the structure determinations. We found that the ligand-binding region of the plexin also conforms to the 7-blade ß-propeller topology of the sema domain. Plexins sub-divide into four classes, A, B, C and D. Our structures of representative members for both major (A and B) classes of plexins in complex with cognate semaphorin ligands establish a common architecture for the interaction. Biophysical measurements are consistent with the dimeric semaphorin interacting with two essentially independent plexin ectodomains.  Structure-guided mutagenesis, combined with biophysical and cellular assays indicate that this bivalency plays an essential role in the formation of the functional signalling assembly.
Semaphorins are either cell surface attached or secreted cell guidance cues which on extracellular binding to plexins, single membrane spanning type 1 receptors trigger signalling to the actin cytoskeleton. Sequence analysis of plexin ectodomains indicates a highly conserved architecture comprised of an N-terminal sema domain, followed by a combination of three cysteine knot and six ß-sandwich type folds, termed PSI and IPT domains respectively. We used mammalian cells (HEK293 cells) for transient expression to produce secreted murine Plexin A2 and one of its semaphorin ligands, murine Sema6A, for structural and biophysical studies. A construct comprising essentially the entire ectodomain of the Sema6A (sema domain plus one PSI domain; mSema6Aecto) crystallized and diffracted to 2.3 Å resolution at Diamond Light Source beamline I03. The structure was determined by molecular replacement (space group P31, one semaphorin dimer of 145 kDa per asymmetric unit, using as search model Sema3A, PDB code 1Q47, 35% sequence identity). The refined model (Rwork 18.5%, Rfree 21.9%) showed identical topology and dimeric structure to that of the previously reported Sema4D and Sema3A structures.1-5 The dimer appears stable in analytical ultracentrifugation (AUC) and multi-angle light scattering (MALS) measurements, consistent with the extensive dimer interface (2600 Å2 buried surface area) present in the crystal structure. A construct comprising the sema domain, PSI, IPT and second PSI domain of murine PlexinA2 (mPlxnA21-4) crystallised and a 2.3 Å resolution X-ray diffraction data set was collected at the European Synchrotron Radiation Facility beam ID23-1. In parallel, crystals were grown of the mPlxnA21-4 - mSema6Aecto complex. These crystals required extensive optimisation, and it was necessary to deglycosylate both mPlxnA21-4 and mSema6Aecto. Ultimately, the complex crystals diffracted to 2.2 Å resolution at Diamond Light Source’s I03 beamline. These data were phased by molecular replacement in PHASER using as search models the newly determined mSema6Aecto structure and the distantly related Met-receptor structure (PDB code 2UZX). After several cycles of refinement and manual rebuilding the electron density for mPlxnA21-4 in the complex structure was used successfully to phase the uncomplexed structure. Refinement of these first semaphorin-plexin complex and unliganded plexin structures was continued to yield final model statistics of Rwork 19.0%, Rfree 23.0% for both. In order to provide a representative structure of a semaphorin-plexin interaction involving a class B plexin we then crystallized and collected data (Diamond-I03) for the ectodomain of human Sema4D (hSema4Decto) in complex with hPlxnB11-2 to generate a model refined at 3.0 Å resolution (Rwork 20.3%, Rfree 24.5%).
The semaphorin-plexin complexes for both classes of plexin comprise the dimeric semaphorin interacting with two essentially separate plexin molecules through side-to-face binding of the sema domains (Fig. 1). Each side-to-face interaction between semaphorin and plexin sema domains buries a surface area of 2000-2500 Å2 and requires no major conformational change in either the semaphorin or the plexin. The extensive interface is mediated by residues which show high levels of sequence conservation within the vertebrate classes of semaphorins and plexins, thus it appears that our complex structures reveal an architecture that is generic for this signalling system.  However, there are significant variations in the detailed structures of the mPlxnA21-4 - mSema6Aecto and hPlxnB11-2 - hSema4Decto interfaces consistent with the specificity of these particular ligand-receptor pairings. 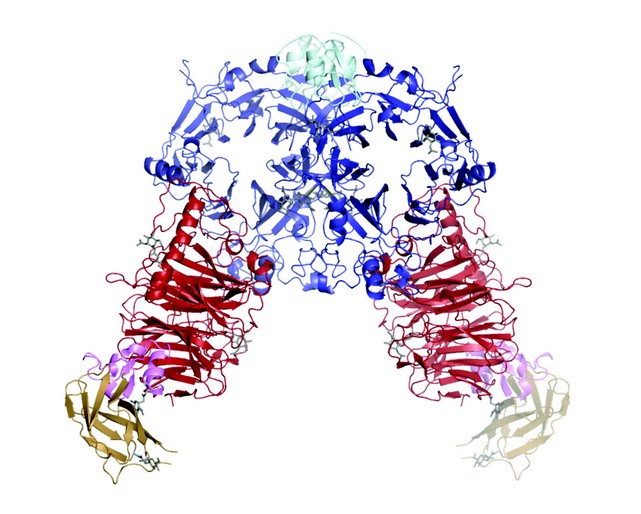 We used surface plasmon resonance (SPR) equilibrium binding studies to demonstrate that the bivalent nature of the semaphorin interaction can result in a substantial (up to 50-fold), avidity-based, increase in the binding affinity (Kd 2.5 µM for the monomeric mPlxnA21-4 binding to a mSema6Aecto coated surface, independent of the coating density; Kd 0.048 µM for the dimeric mSema6Aecto binding to a surface densely coated with mPlxnA21-4 vs a Kd of 0.28 µM for a more sparsely coated surface).  Structure-guided design allowed us to generate mutant forms of the semaphorin ectodomains which were monomeric. These mutant molecules were stable and were still capable of binding plexin, but showed no avidity effect in SPR measurements. Significantly monomeric Sema4Decto could no longer elicit a response in the standard cellular assay for plexin B1 signalling, the cell collapse assay (Fig. 2). We were also able to combine structure-guided mutagenesis with SPR and cell collapse assays to verify the physiological relevance of the semaphorin-plexin interface observed in the crystal structures.

Figure 2: The COS7 cell collapse assay.

In combination our structural and functional data suggest a model in which the bivalent interaction of the semaphorin ligand with two plexin receptors provides an essential trigger for cell guidance signalling. Further work can now build on these insights to probe the architecture and role of the entire plexin ectodomain, the requirements for signal transduction, and whether the formation of the initial semaphorin-plexin interface generates a stand-alone signalling complex or provides the first step in a larger scale clustering of receptors.
Janssen, B.J.C.,Robinson, R.A., Pérez-Brangulí, F., Bell, C.H., Mitchell, K.J., Siebold, C., Jones, E.Y. Structural basis of semaphorin–plexin signalling. Nature. Vol: 467:1118-1122, (2010)
References
Funding Acknowledgement
Cancer Research UK, the UK Medical Research Council, the Human Frontier Science Program, Science Foundation Ireland and the Wellcome Trust.