There are literally astronomical numbers of bacteriophages on Earth. These are viral parasites of bacteria and as such generate an immense selective pressure, driving adaptive co-evolution between predator and prey. Bacterial hosts are forced to evolve protective mechanisms1 whilst the predating phages must respond to subvert these new counter-measures.  One broad class of phage-resistance mechanisms takes an extreme approach, causing the suicide of phage-infected bacteria before the infective particles can mature within the host. Consequently, the phage is removed from the environment and the clonal population of bacteria is protected by this altruistic suicide. These ‘abortive infection’ systems are of commercial importance due to their use in food-grade microbiology, for example, protecting bacterial cultures during dairy fermentation. Whilst studying strains of a plant pathogen, a plasmid-borne homologue of an abortive infection gene was identified. Abortive infection activity of this homologue was dependent upon the encoded toxic protein together with an RNA encoded by an upstream repetitive DNA sequence. Prior to phage infection, the RNA appeared to inhibit the protein. Using beamlines I03 and I04 we undertook X-ray crystallographic analyses of these protein-RNA complexes, to better understand the nature of the interaction and the toxic activity of the protein.
The Pectobacterium atrosepticum abortive infection system, named ToxIN, was shown to be bicistronic.2 A single promoter drives transcription of the repetitive toxI DNA sequence, featuring 5.5 tandem repeats of 36 base-pairs. This is followed by a transcriptional terminator, then a relatively short open reading frame, toxN, encoding a protein of 171 amino acids. Strains of Pectobacterium, E. coli and Serratia were transformed with plasmids containing toxIN and in each background we were able to observe potent abortive infection activity.2,3 The effects were variable; in the most impressive cases, the ability of phages to form plaques was lowered a billion-fold. Other species of phage were more moderate in triggering the abortive infection response, and notably, some phages were able to circumvent it completely.
Whilst cloning the two elements of the operon, it was observed that the protein was extremely toxic, and accordingly the descriptive name of ToxN (toxin) was coined for the gene product. If the repetitive element was simultaneously over-expressed with ToxN, it was able to reverse the toxic activity, hence ToxI (ToxN inhibitor)2. In the natural context, as an operon, the transcriptional terminator between the two elements appears to maintain the natural balance, allowing only ten percent of transcriptional events to read through into toxN.2,3 As a result, the bacterial host treads a fine line, maintaining a delicately contained toxin in the cytoplasm, awaiting activation. It was unclear how ToxI was containing the dangerous functions of the toxin. 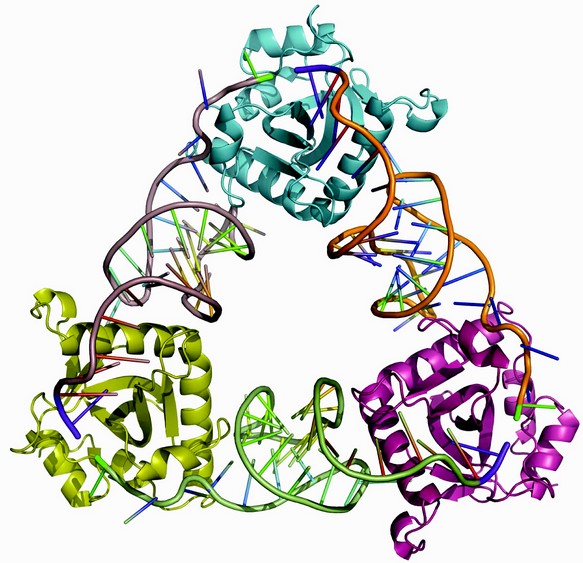 Figure 1: Cartoon of the ToxIN complex structure. ToxN monomers are at each corner of the triangle, linked by three, thirty-six nucleotide, ToxI RNAs.
By separately controlling ToxI and ToxN on two, independently-inducible, plasmids, it was possible to determine that ToxI was not encoding a protein that inhibited ToxN. Rather, a single transcribed copy of the 36 base-pair repeats could inhibit ToxN as an inhibitory non-coding ToxI RNA.2 This unique relationship is the first example of a toxin-antitoxin system that employs an antitoxic RNA to inhibit a toxic protein4.
Toxin-antitoxin systems were classically known for their ability to prevent plasmid loss as cells divided by binary fission. Any daughter cell not inheriting a copy of a plasmid containing such a toxin-antitoxin system will perish rapidly, as the labile antitoxin concentration falls and the longer-living toxin begins to dominate. The paradigm that toxicity is induced by selective reduction of antitoxin levels is remarkably flexible in its applications. Toxin-antitoxin systems can indeed maintain plasmids, but also allow colonies to survive antibiotic treatment by forming persister sub-populations, or resist chemical and environmental stresses and of course, can protect from bacteriophage infection. The two most-studied Types rely upon the interaction of complementary antitoxic and toxic RNAs (Type I) or proteins (Type II). The ToxIN system is the first member of a mixed, Type III, family of protein-RNA toxin-antitoxin systems. By performing X-ray crystallographic studies of the ToxIN complex, to elucidate the macromolecular structure, we had hoped to identify the mode of toxicity for ToxN, whilst also identifying the mode of antitoxicity employed by ToxI.  The results were to prove much more illuminating than we could have anticipated.
The X-ray crystal structure, determined to 3.20 Å resolution, was solved using single wavelength anomalous scattering from selenomethionine. A 2.55 Å resolution structure was then obtained by molecular replacement of non-isomorphous native protein crystals that were better ordered than the derivative5. The observed repeating structural unit consists of a ToxN monomer in complex with a 36 nucleotide ToxI RNA oligomer, derived from a full-length toxI transcript.5 This monomeric complex formed trimers with a triangular architecture (Fig. 1). The 3'-end of each ToxI unit is adjacent to the 5'-end of the next unit, in a pseudo-continuous head-to-tail manner, and each ToxI oligomer interacts extensively with two ToxN molecules; one at each terminus. Every ToxN molecule thereby interacts with two ToxI molecules over an extended surface (Fig. 1). This surface appears to be specifically adapted to bind single-stranded RNA, as an electropositive groove extends over the surface of ToxN (Fig. 2). 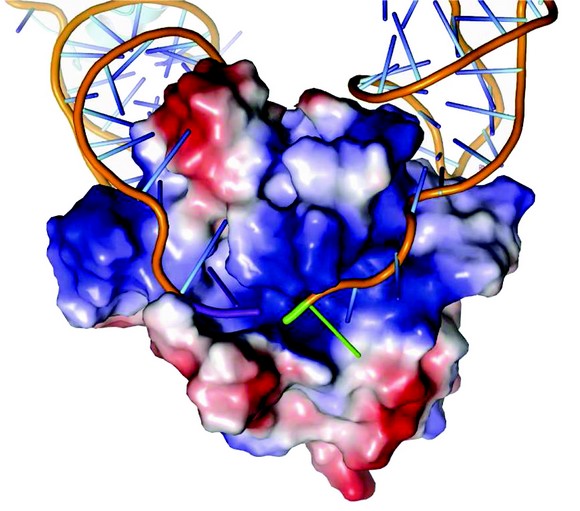 Figure 2: Surface charge representation of ToxN in complex with ToxI RNA. ToxN has a positively charged cleft into which ToxI binds. ToxN is shown as a surface plot coloured according to electrostatic potential, with positive potential in blue and negative potential in red. The ToxI backbones are shown as orange strands. The 3' end of the entering ToxI is shown in purple, whilst the 5' end of the exiting ToxI is shown in green.

The presence of a 2'-3' cyclic phosphate at the 3' end of each ToxI provided a clue as to the toxic activity of ToxN. This cyclic phosphate is an intermediate in self-cleavage of a single-stranded RNA. Through site-directed mutagenesis studies, together with functional assays, it was shown that ToxN is an active endoribonuclease that cleaves ToxI and other substrates internally (as distinct from cleaving at the termini). The protein promotes the activation of the RNA 2'-OH for substrate-assisted cleavage of the phosphodiester linkage.5 This is corroborated further by the unexpected structural resemblance of ToxN protein to proteins of Type II toxin-antitoxin systems, where the toxic proteins induce bacteriostasis by degrading cellular mRNA in a sequence-specific fashion4. Though structurally related, ToxN is further embellished and has specific additional features, such as an extended a-helix, which ToxI uses to wrap over the protein and form a large surface interaction5.
ToxI RNA forms a complex pseudoknot, where the single-stranded RNA folds to form regions of duplex and triplex base interactions, often eschewing standard Watson-Crick base pairing5. These specific convolutions develop the two binding surfaces for ToxN and mutations disrupting the sequence and thereby folding properties were seen to prevent antitoxicity by the mutant ToxI RNAs5. Pseudoknots are present in the genomes of multiple RNA viruses to regulate translation and can also have roles in control of metabolic pathways, altering conformation and therefore activity in response to small metabolites. In the context of the ToxIN system, it is therefore conceivable that another small metabolite, or indeed a phage product, might similarly alter the ToxI pseudoknot and release ToxN, causing abortive infection. Other modes of activation could be envisaged, such as selective degradation of ToxI, or conformational changes to ToxN which unleash the protein. The phages that resist the system would thereby have variant expression of products so such recognition would not occur, or entirely lack such molecules to begin with. By studying mutant phages that were isolated as spontaneously resistant to ToxN abortive infection,3 it will be possible to better understand how a phage might interact with ToxIN and induce such lethal effects.
Predicted homologues of ToxN exist in plasmids and the chromosomes of diverse bacteria, including virulent pathogens of humans and animals, along with the beneficial human commensals, extremophiles and soil and marine species. Genes for these protein homologues are usually accompanied by their own specific toxI, unique in primary sequence and in the length and number of repeats. As we begin to understand how these different RNAs interact with their cognate toxic proteins, we are discovering novel forms of protein regulation by complex RNA pseudoknots.  Of course, if we could artificially manipulate this regulation, we could turn the ToxN homologues present in pathogenic bacteria to our advantage as therapeutic treatments or as investigative tools.
Blower, T., Pei, X., Short, F., Fineran, P., Humphreys, D., Luisi, B. & Salmond, G. A processed non-coding RNA regulates an altruistic bacterial antiviral system. Nat. Struct. Mol. Biol. 18, 185-190 (2011)
References
Accession Codes
The co-ordinates for each of three ToxIN complex forms, Native 1, Native 2 and Selenomethionine have been deposited in the Protein Data Bank, under accession numbers 2xdb, 2xd0 and 2xdd, respectively.
Funding Acknowledgements
This work was supported by grants from the Biotechnology and Biological Sciences Research Council (UK) and the Wellcome Trust (UK).