NiO engaged in spin confrontation at the interface

NiO engaged in spin confrontation at the interface

Optimizing the electronic and magnetic properties of layered magnetic heterostructures for specific applications remains a challenging task for materials engineering. Characterization techniques employing the absorption and scattering of soft X-rays have emerged as important and powerful tools for the study of heterostructures and their interfaces. In fact, magnetic dichroism in X-ray absorption (XA) i.e., the difference in absorption based on the relative orientation of the X-ray polarization and magnetic axes of a system has gained prominence as an element-, valence-, and site-specific magnetometry technique providing very high spatial and temporal resolution. X-ray magnetic linear dichroism (XMLD) has been long established as a probe to study antiferro- as well as ferro- and ferri-magnetic materials.1 More recently, this technique has joined forces with photoemission electron microscopy (PEEM) to determine the orientation of antiferromagnetic domains by monitoring the relative peak intensities at the L2 absorption edges of 3d transition metal oxides. However, previous PEEM studies did not pay attention to the spin orientation relative to the crystallographic axes. As was first shown by Arenholz et al.2 for a correct interpretation of the XA and XMLD spectra the orientation of the X-ray linear polarization and the magnetic spin axis with respect to the crystal frame has to be taken into account explicitly. Applying this insight to study the antiferromagnetic domain structure at the Co/NiO(001) interface we found - contrary to earlier reports - a perpendicular coupling between the ferromagnetic Co and antiferromagnetic NiO layers.
A 2.5 nm thick Co film was grown by e-beam evaporation onto a freshly cleaved NiO(001) single crystal surface and capped with 1 nm Pd to prevent oxidation. PEEM measurements were carried out on beamline I06 in both spectromicroscopy and imaging mode. Figure 1(a): shows the Ni L2, 3 XA and the XMLD obtained as the difference between the XA spectra from two contrasting domains. The measured XMLD agrees well with the calculated multiplet structure for a spin axis along the [110] direction, as seen in Figure 1(b). The XMLD spectra along [100] is very different, which emphasizes the importance of taking into account the orientation of the linear X-ray polarization, E, and the spin axis, H, with respect to the crystallographic frame. The angular dependent XMLD can be separated into an isotropic part, which is symmetric around H, and an anisotropic part, which depends on the orientation of the crystal axes. The Ni2+ L2 edge has the peculiarity that the isotropic part vanishes so that a maximum XMLD intensity is obtained not only for E||H||[100] but also for E||[110]?H.
PEEM images of the NiO(001) interface plane were obtained at the Ni L2 edge with photon energies 870 and 871 eV, which are indicated as A1 and A2 in Figure 1(a). The difference of the images, A1–A2, with E||[110] is shown in Figure 2(b), where the lattice directions are given in Figure 2(a). The magnetic contrast is clearly visible: the light and dark areas have their spin axes along [110] and [110], respectively. In contrast, the sum image, A1+A2, shown in Figure 2(c), is not sensitive to the magnetization. 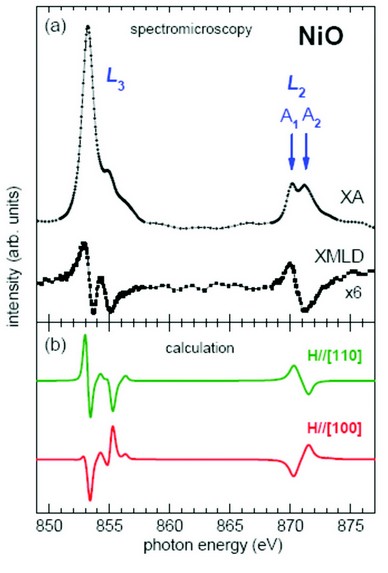 Figure 1: (a) Ni L2,3 XA and XMLD measured as the difference between two local XA spectra with linear X-ray polarization E||[110]. The two peaks in the L2 edge, indicated by A1 and A2, are used to obtain magnetic contrast in the PEEM images. (b) Multiplet calculations of the XMLD spectra along [110] and [100] directions.

Figure 3 shows the PEEM images of the ferromagnetic Co and antiferromagnetic NiO taken over the same sample regions. The Co image was obtained using X-ray magnetic circular dichroism (XMCD) with the X-ray helicity vector along [110]. In the light and dark areas of the Co image the spin direction is parallel and antiparallel, respectively, to the helicity vector, while in the grey areas the spin is perpendicular to the helicity vector. The dark areas in the NiO image are split into light and dark areas in the corresponding Co image, while the light areas correspond with the grey areas in the Co image. From this we can conclude that the coupling between the Co and NiO spins at the interface is perpendicular. 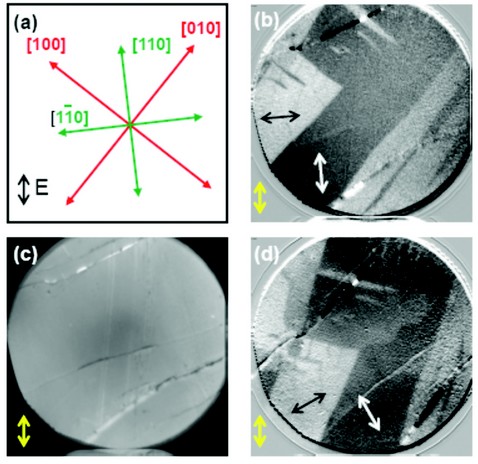 When the Co/NiO(001) sample is rotated counterclockwise by 22.5º, as in Figure 2(d), an additional faint contrast appears within the light and dark areas of the antiferromagnetic NiO domains, which coincides with the position of the Co domains in Figure 3(a). As possible explanation we suggest that the spin axes of the NiO interface domains with nominal orientations along [110] and [110] can be tilted towards either the [100] or [010] directions. A more quantitative analysis of this spin tilting requires further PEEM measurements, where it would be of interest to investigate the dependence under various sample conditions, such as film thickness and roughness. 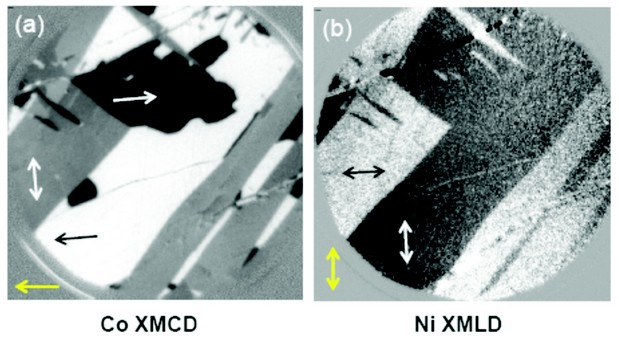 Figure 3: PEEM images of Co/NiO(001) with field-of-view of 15 mm. (a) Ferromagnetic Co domains measured with circular polarization and (b) antiferromagnetic NiO domains measured with linear polarization. The polarization direction is indicated by the yellow arrow in the bottom left corner of each panel. The other arrows indicate the spin directions of the different domains. In the Co XMCD PEEM image the light and dark areas have the spin parallel and antiparallel to the x-ray helicity vector, respectively. The gray areas in the Co image have the spin perpendicular to the helicity vector. In the Ni XMLD PEEM image the light and dark areas have spin axis along [110] and [110], respectively. The results signify a perpendicular coupling of the spins in ferromagnetic Co and antiferromagnetic NiO layers.