The alteration shown by silver leaf applied to polychrome carved wood and altarpieces to imitate metal objects (arms, garments, tools and decorative mouldings) is a very generalised phenomenon. The processes involved are not well understood, limiting the development of adequate conservation strategies. The object of the study was to determine and clarify the alteration mechanisms. For this, several silver foils from polychrome carved wood, mouldings as well as flat surfaces of altarpieces from the medieval period were analysed.
These metal applications show a complex micro-layered structure: the silver leaf (1-2 µm thick) is protected by a resin or varnish (5-10 µm thick) and fixed on the background with the help of adhesives. Although the silver foil is often glued over a bole (clay preparation of about 15-20 µm thick) it can also be glued (5-10 µm thick) directly over the background by a mix of of gypsum and animal glue.
The extremely small amount of sample available, the heterogeneous nature and minor presence of compounds (proteins, lipids, terpenic substances, metal carboxylates, oxalates, chlorides, sulphides and metals) and the submillimetric layered structure makes synchrotron radiation particularly useful. Moreover, only the combination of several analytical techniques provides the necessary complementary information for analysis. In particular, µSR-FTIR is the most appropriate for the analysis of glues, varnishes and binding media, while µSR-XRD is the most adequate for determining the alteration to the silver compounds.
The whole silver alteration process is driven by the transformation of metallic silver into silver (I) by the oxidising action of the atmosphere. The high capacity of silver (I) to react with sulphide, and the greater stability of silver chlorides and oxides compared to sulphides, further determines the formation and time evolution of the silver alteration compounds. The formation of chlorides and sulphides is related to the presence of substances like hydrogen sulphide, carbonyl sulphide and chlorides present in the atmosphere1 of the museums2 in variable concentrations and proportions. This originates from the decomposition of living matter for the sulphur bearing substances and from marine spray for the chlorine bearing ones. Chlorine and sulphur are also found in the adhesive materials used to glue the silver foil onto the preparation layer, such as egg yolk or animal glue.
Silver chlorides are detected both in cracks where they can easily grow and in the contact areas within the silver foil and the adhesives. The presence of chloride in these areas can be explained by diffusion from the glues themselves or the preparation layers. For a better understanding of the mechanisms involved in the alteration of the silver foil, the microstructure and composition of all the layers involved must be taken into account.
µSR-XRD has correlated silver chloride to chlorargyrite and silver sulphide to either acanthite or argentite through the formation of intermediate substances such as Ag8S. In particular, the growth of silver chloride crystals is found to be responsible for the generation of tensions both in the cracks and in the surface contact areas between the silver foil and the preparation and, consequently, for the deterioration of the silvered areas. 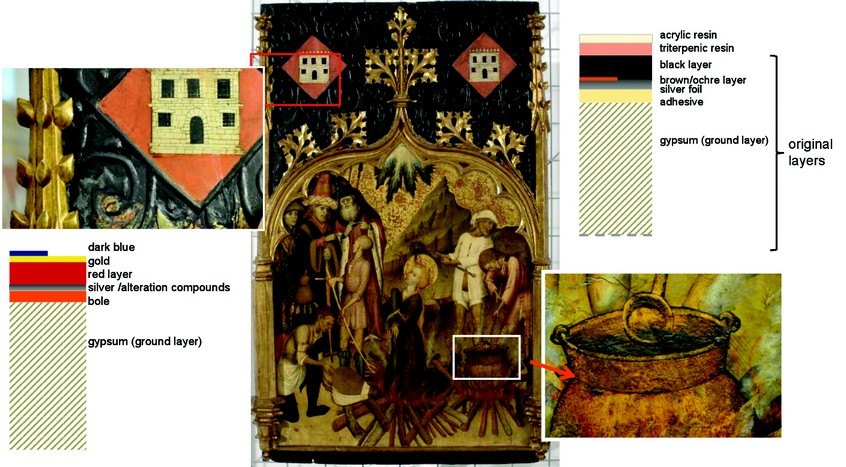 Figure 1: Santa Llúcia altarpiece, Museu Nacional d’Art de Catalunya, Barcelona. Detail of the sampling points (during the restoration process). Scheme layers structure : resins (about 5-10 µm), metal foil (1-2 µm), adhesive (5 µm) and bole (15 µm).
µSR-FTIR was performed at Diamond Light Source beamline B22 using a 12 µm x 12 µm squared spot working in transmission mode on a small fragment of the corresponding layer spread in a diamond cell to obtain the adequate thickness. The small spot size allowed the discrimination of each of the several compounds present in each layer. µSR-XRD was performed at the ESRF (BM16) working in transmission mode on thin cross sections of the samples (100 µm thick) with a 20 µm x 50 µm spot and 10 keV energy.
Here two different examples corresponding to the altarpiece of “Santa Llúcia” by Bernat Martorell (1400?-1452), one of the most important masters of 15th century Catalonia, are shown (Fig. 1). This altarpiece is currently on display in the Museu Nacional d’Art de Catalunya. 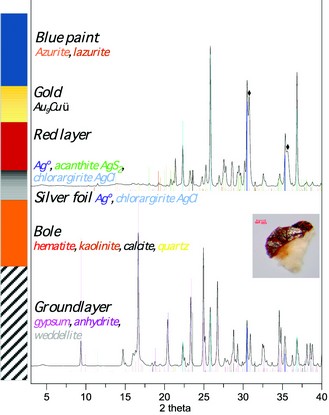 Figure 2: µSR-XRD pattern of sample from the background area of the overall. 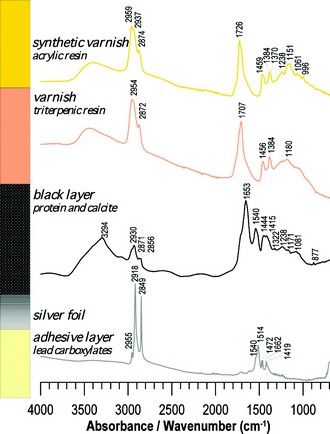 Figure 3: µSR-FTIR spectra of sample from the pot area.
The first example corresponds to the background area. This area was originally silver coatedand, probably due to its degradation, later recoated with a gold foil over which several paint layers were applied.
Two fragments separated from the sample were analysed, the first containing the latest coating (blue overpaint, gold leaf and red paint) and the alteration compounds of the original silver foil, and the second the remaining original silver foil and red bole preparation. Metallic silver, the monoclinic form of Ag2S (acanthite) and AgCl (chlorargyrite) in a larger proportion (Fig. 2) are determined in the first fragment. The second fragment shows the presence of metallic silver and the bole forming compounds; clay minerals (kaolinite) and gibbsite, quartz, calcite and hematite (Fig. 2). The remains of silver foil, as observed with optical microscopy, appears in a good state of conservation; silver chlorides are present contrasting with the total absence of silver sulphide. The results obtained suggest that silver sulphide was formed due to the reaction of the silver foil with the atmosphere before the new coating was applied. On the contrary, the overall presence of silver chloride suggesting the formation of this compound even before the silver foil was exposed to the atmosphere.
In another area from the same altarpiece a silvered area (stew pot) was originally covered with a black paint layer, later varnished several times (Fig. 3). In this area the silver foil was well protected by the outer black paint and it appears mostly unaltered. The black paint is formed by carbon mixed with a calcium carbonate filler and a proteinaceous binding medium. Two different varnish layers are found on top of the paint. The first, applied directly on the silver foil, is a triterpenic resin (most probably original) and the second, most external one, corresponds to a modern acrylic resin.
In this case, the silver foil was glued directly to the ground layer without using a bole preparation layer. Both SEM-EDS and µSR-XRD analyses of the sample show the presence of a small amount of lead white. µSR-IR analysis of the glued area shows the presence of a high amount of lead carboxylates and the lack of proteinaceous substances, which suggests that the gluing material used was a drying oil. Treatises from the period describe the addition of small amounts of lead white to the drying oil to help its polymerization and drying process.
The results obtained have shown that the conservation state of the silver foil is directly related to the extent of the silver-atmosphere contact. When protected by a paint layer or a well-preserved resin coating, the silver foil can be found in a good conservation state. On the contrary, if the protective layer appears partly or fully absent, leaving the silver surface, either directly or through the cracks, exposed to the atmosphere, the silver alteration products are all that is left.
Moreover the most frequent alteration substances found are; first silver chloride and then silver sulphides. However, when the foil is kept well-protected from the action of the atmosphere, the only alteration substance determined is silver chloride.
Salvadó, N., Butí, S., Labrador, A., Cinque, G., Emerich, H. & Pradell, T. SR-XRD and SR-FTIR study of the alteration of silver foils in medieval paintings. Analytical and Bioanalytical Chemistry. 399, 3041-3052 (2011)
References
Funding Acknowledgement
The European Community’s Seventh Framework Programme, FP7/2007-2013, under grant agreement SM2410 (Diamond Light Source on B22) and 16-01-733 (ESRF on BM16). “Ministerio de Ciencia e Innovación” (Spain) Grant HAR2009-10790.
Agreement of collaboration between the Technical University of Catalonia (UPC) and the “Museu Nacional d’Art de Catalunya” (MNAC).
© MNAC-Museu Nacional d’Art de Catalunya (Barcelona) Photo: Calveras