Liquid crystals are a state of matter that possesses some properties of liquids and some of solids. Their use in display screens is familiar, where the optical properties of the substance change in response to applied electric field. However, liquid crystals can form a wide range of very complex phases, and scientists have been using Diamond to study perhaps the most complex liquid crystal structure so far observed. This work has been published in the Journal of Materials Chemistry.

The purpose of this experiment was to test the validity of a proposed structure of a cubic phase of thermotropic liquid crystals referred to as Im3m(I). The proposed triple network structure, consisting of three independent interpenetrating infinite networks is arguably the most complex liquid crystal structure to date.

Goran Ungar and Xiangbing Zeng at the University of Sheffield used small angle X-ray scattering on the I22 beamline at Diamond, which provided the high resolution necessary to determine the structure based on the electron density map of the Im3m(I) phase. The group verified the structure using two methods, the first of which was a common crystallographic technique called isomorphous replacement. To this end, special compounds were synthesized by the group of Georg Mehl of Hull University. The second technique was to build models of possible structures, calculating the X-ray diffraction patterns and comparing these to the experimental diffraction patterns produced on I22. Both results confirmed the triple network structure proposed. 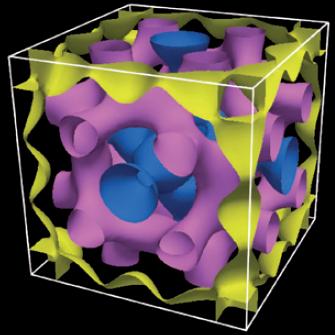 "Highly complex structures in soft materials such as liquid crystals and block copolymers are of increasing interest for potential applications in e.g. photonic materials or as templates for the synthesis of special nanoporous ceramics, catalysts etc."