A collaborative team from the School of Medicine at the University of Cardiff, Wales and a range of US institutions used the UK’s national synchrotron, Diamond Light Source, to help reveal the details of how a protein in the blood is attracted to a key component of Adenovirus based vaccines.

It is believed this protein kicks off a chain reaction, involving the immune system, that can culminate in extremely rare but dangerous blood clots. The Cardiff team were given emergency government funding to find the answers. In collaboration with scientists in the US and from AstraZeneca, they set out to collect data on the structure of the vaccines and perform computer simulations and related experiments to try and uncover why some of the vaccines based on Adenoviruses were causing blood clots in rare cases.

The study, published in the journal Science Advances, reveals the outer surface of the adenovirus attracts the platelet factor four (PF4) protein to it like a magnet. Their data confirm that PF4 is capable of forming stable complexes with clinically relevant adenoviruses, an important step in unraveling the mechanisms underlying thrombosis with thrombocytopenia syndrome (TTS).

Prof. Alan Parker, one of the researchers at Cardiff University, told BBC News:

The adenovirus has an extremely negative surface, and platelet factor four is extremely positive and the two things fit together quite well

We've been able to prove the link between the key smoking guns of adenoviruses and platelet factor four. What we have is the trigger, but there's a lot of steps that have to happen next. 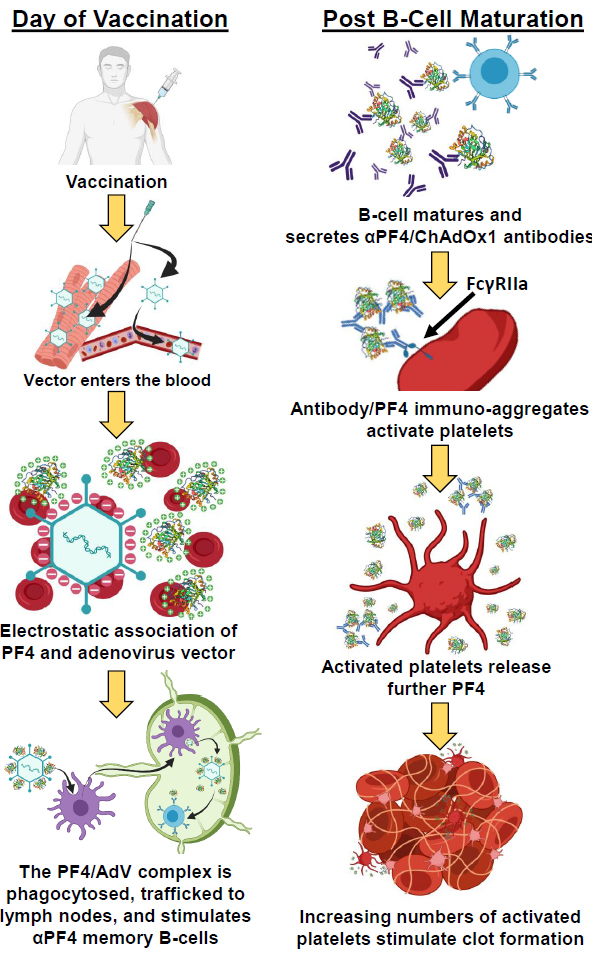 Cartoon representation of a proposed mechanism by which ChAdOx1 association with PF4 might result in thrombotic thrombocytopenic syndrome.
Image reused from DOI: 10.1126/sciadv.abl8213 under the CC BY 2.0 license.

Researchers set out to collect data on the structure of the vaccines and perform computer simulations to try and uncover why some of the vaccines were causing blood clots. They began by gathering structural data on the Adenovirus ChAdOx1 which is used in the AstraZeneca vaccine. The team used Cryo-Electron Microscopy (cryo-EM) – which achieves near-atomic resolution –to solve the structure of the virus capsid, however they need higher resolution images of the knob proteins that interact with human cells. For this, they performed protein crystallography at the I03 beamline at Diamond. Using these two complementary techniques, they were able to get accurate and high-resolution structures of the Adenovirus.

Once the structure was known, the research team could then test which human proteins were binding to the virus. They found a receptor that binds strongly to the ChAdOx1 fibre-knob protein. This receptor known as “CAR” is highly conserved between humans and chimpanzees, which makes sense as this virus can infect both species. This finding is important as it is the first verified example of human and primate adenoviruses sharing the same receptor.

High-resolution experimental structural information is vital to align alongside and inform lab-based and clinical experiments. Coupled with computational analyses, it can draw the link between what is happening at an atomistic level and the cellular level, all the way through to the impact on human health.

How the immune response is triggered 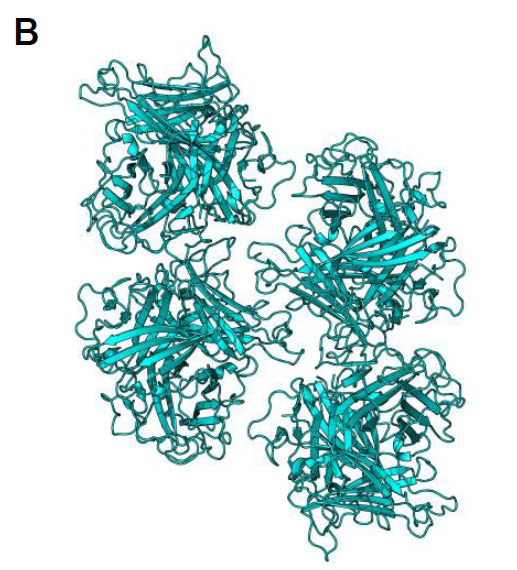 Crystallisation of ChAdOx1 fibre-knob protein results in 4 copies of the expected trimer per asymmetric unit and reveals side-chain locations. The crystal structure was solved with 12 copies of the monomer in the asymmetric unit, packing to form 3 trimeric biological assemblies. Density was sufficient to provide a complete structure in all copies.
Image reused from DOI: 10.1126/sciadv.abl8213 under the CC BY 2.0 license.

The team used their data and compared it to previously published work. They concurred with previous work that the presence of ChAdOx1 was causing an immune response against PF4. However, the research team suggested a brand-new mechanism by which this occurred. They proposed that small quantities of ChAdOx1 are entering the bloodstream at the injection site. The injection may cause the release of PF4 which then associates with the adenovirus in the blood and causes the immune response.

While extremely rare, the blood clots associated with certain vaccines have caused concern among the public and experts alike. Finding explanations for the clots is the first step to preventing them in the future. The team already noted that not all adenoviruses have the same electrostatic charge, so reducing the number of blood clots could be a matter of choosing a different viral vector for the vaccine.