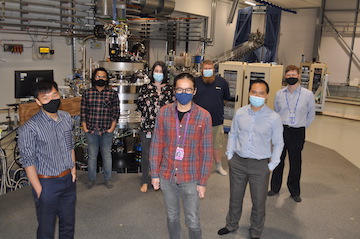 Physicists report the first experimental evidence to explain the unusual electronic behaviour behind the world’s thinnest superconductor, a material with myriad applications because it conducts electricity extremely efficiently. In this case the superconductor is only an atomic layer thick.

The research, led by Massachusetts Institute of Technology and Brookhaven National Laboratory, was possible thanks to new instrumentation available at Diamond.

Diamond is one of only a few facilities in the world to use the new experimental technique, Resonant Inelastic X-ray Scattering (RIXS), which is a combination of X-ray Absorption Spectroscopy (XAS) and X-ray Emission Spectroscopy (XES), where both the incident and emitted energies are scanned. This state-of-the-art facility is where the team from three continents conducted their experiment.

The resulting data could help guide the development of better superconductors, which in turn could transform the fields of medical diagnostics, quantum computing, and energy transport, which all use superconductors.

In 2015 scientists discovered a new kind of high-temperature superconductor: a sheet of iron selenide only one atomic layer thick capable of superconducting at 65 Kelvin. In contrast, bulk samples of the same material superconduct at a much lower temperature (8 Kelvin).

In a regular metal, electrons behave much like individual people dancing in a room. In a superconducting metal, the electrons move in pairs, like couples at a dance. Professor Riccardo Comin, Class of 1947 Career Development Assistant Professor of Physics at MIT, explained that “all these pairs are moving in unison, as if they were part of a quantum choreography, ultimately leading to a kind of electronic superfluid.”

But what is the interaction, or ‘glue’, that holds these pairs of electrons together? Scientists have known for a long time that in conventional superconductors, that ‘glue’ is derived from the motion of atoms within a material. 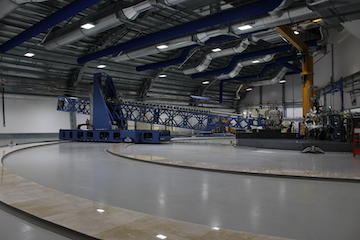 Part of the resonant inelastic x-ray scattering (RIXS) instrument at Diamond that was used to uncover secrets of the world’s thinnest superconductor.

Prof. Comin added, that if you look at a solid sitting on a table it doesn’t appear to be doing anything, however “a lot is happening at the nanoscale. Inside that material electrons are flying by in all possible directions and the atoms are rattling, they’re vibrating.” In conventional superconductors, the electrons use the energy stored in that atomic motion to pair up.

The ‘glue’ behind electrons’ pairing in high-temperature superconductors is different. Scientists have theorised that this ‘glue’ is related to a property of electrons called spin (another, more familiar property of electrons is their charge). The idea is that in a high-temperature superconductor, electrons can pick up some of the energy from these spins, known as spin excitations. And that energy is the ‘glue’ they use to pair up.

Until now, most physicists thought that it would be impossible to detect or measure spin excitations in a material only an atomic layer thick. That is the remarkable achievement of this research - not only did the physicists detect spin excitations, they also showed that the spin dynamics in the ultra-thin sample were dramatically different from those in the bulk sample. Specifically, the energy of the fluctuating spins in the ultra-thin sample was much higher—by a factor of four or five—than the energy of the spins in the bulk sample.

Enter, Resonant Inelastic X-ray Scattering (RIXS), a new experimental technique that Pelliciari helped pioneer. Only a few facilities in the world have advanced RIXS instruments. One, located at Diamond and led by Dr Ke-Jin Zhou, is where the team conducted their experiment. Another one, which was still being built at the time of the experiment, is at Brookhaven National Laboratory.

It is so fulfilling that we can actually probe the fine spin dynamics in a truly atomic-layer thick superconductor, thanks to the unique combination of high energy resolution and high photon throughput RIXS development at the I21 beamline. Besides contributing to understanding the superconducting mechanism in these high-temperature superconductors, the work opens up a new chapter for the research of modern electronic and magnetic devices.