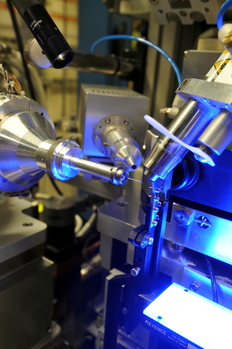 Scientists from Diamond Light Source have published a novel video-based article of their work here at the synchrotron. The study presented the characterisation of a bacterial protein from Streptococcus pneumoniae that is involved in uptake of carbohydrates by the bacteria to use as a nutrient source. These proteins are potential targets for vaccine and/or new antibacterials due to their location on the surface of the bacteria and their critical role in infection, thus understanding the molecular structure can contribute to new strategies for combatting pneumococcal disease.

Diseases attributed to Streptococcus pneumoniae include pneumonia, meningitis, bronchitis, otitis media and sinusitis. It remains a major global public health problem especially in the young, the elderly and immunocompromised. Moreover, the rise of antibiotic resistance in strains of this bacteria have also led to it being added to the list of 12 priority pathogens by the World Health Organisation (WHO) which pose the greatest threat to human health.

The video highlights the steps used to optimise a family of proteins in Streptococcus pneumoniae and bacteria in general which bind and import carbohydrates into the cell. These proteins are called substrate binding proteins and they work in tandem with a class of membrane proteins called ATP-binding cassette (ABC) transporters to transport a wide variety of substrates across the cell membrane in addition to carbohydrates. Here the substrate binding protein under study specifically binds a carbohydrate that Streptococcus pneumoniae can use as a nutrient source.

The success of the structure determination was enhanced by the protocol detailed in the video which goes through the experimental steps to characterise the protein, the successful crystallisation and the use of the Microfocus Macromolecular Crystallography beamline (I04) at Diamond to solve its structure. The video highlights that by adjusting the wavelength of the X-Ray beam, the team could fine-tune their experiment to help solve the structure. The team highlight that the methods used in the video can be applied more generally to other proteins to aid in structural analyses.

The skilful efforts of the team were captured on film by JOVE and added to the online version of their paper. JOVE is a relatively new and innovative journal that aims to share research methodologies across the scientific community. It shows videos of techniques being performed so that people who access the paper can reproduce them accurately. In addition to this, a written step-by-step protocol is made available to fully inform the reader of the methodology. These features make JOVE ideally suited to engage new researchers to rapidly understand the protocol and to disseminate the technique, facilitating the illustration of tricky aspects of the protocol that are not easily captured by text alone.

JOVE doesn’t focus on results, the methods are the vital part of the study that they are trying to communicate. In this case, the steps taken by the team at Diamond to optimise the methodology to solve the structure of the protein are the results conveyed by JOVE.

Lead author of the study, and Post-Doctoral Research Associate at Diamond, Dr Simone Culurgioni explained the impact of the publication: “If we can share our methodologies, then other people can improve their research too.”

He continued, “The article is a pipeline of techniques that you can use once you have purified the protein to characterise and crystallise it, and solve its structure using the facilities at Diamond. These techniques can be applied to numerous other substrate-binding-proteins from other sources and even other types of proteins.”

The streamlined protocol for exploring proteins will hopefully benefit many other structural researchers and could be the starting point for further methodological improvements. With help from JOVE, the step-by-step procedure can be faithfully repeated.

To find out more about the I04 beamline, or to discuss potential applications, please contact Principal Beamline Scientist Dr Dave Hall: david.hall@diamond.ac.uk