The way in which leukaemia cells prevent themselves from being attacked by the immune system has been revealed with the help of Diamond Light Source. The groundbreaking discovery, published in EBioMedicine, could help to develop new types of drugs that ensure our immune system can fully fight this devastating cancer.

Figure 1: The process of inactivating two critical types of white blood cells as carried out by the AML cells. 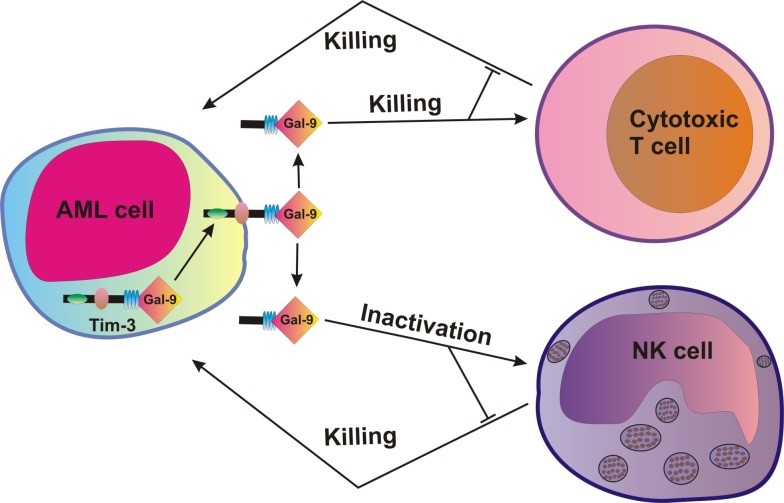 Leukaemia is a type of blood cancer that affects a large number of people worldwide. Acute myeloid leukaemia (AML) is a subtype that can be often fatal because current treatment strategies are ineffective.

AML cells are particularly “clever” at evading attack by immune cells that patrol our body, ensuring they can stay alive long enough to multiply in our blood. They do this by inactivating two critical types of white blood cells called cytotoxic T lymphocytes and natural killer (NK) cells.

By utilising the Circular Dichroism beamline (B23) at Diamond, the molecular mechanisms underpinning the way in which AML cells inactivate these immune cells were revealed. One of the principal investigators of the study, Dr Vadim Sumbayev, summarised the findings: “We discovered that leukaemia cells, but not healthy blood cells, express a receptor normally found only on nerve cells called latrophilin 1 (LPHN1). Stimulation of this receptor causes these cancer cells to release the protein, galectin-9, which then prevents host immunity against the cancer cells”.

The team of scientists explored the way in which galectin-9 interacted with another protein called Tim-3, which jointly wreak havoc in the immune system. B23 showed exactly how these proteins bound together; with Tim-3 causing galectin-9 to change shape and enhance its wayward activity.

Dr Rohanah Hussain, Senior Beamline Scientist here at Diamond, explained the rationale behind the methodology: “High photon flux and the micro-collimated beam of B23 allowed the use of a 10 cm pathlength cell in this measurement. B23 was crucial to observe the interaction between the two proteins in a dynamic state and show the structural changes that occurred.”

The discovery of the latrophilin 1-Tim-3-galectin-9 pathway opens up an array of new biomarkers for effectively diagnosing AML and more importantly, could be the beginning of a new era of AML immune therapy. “Targeting this pathway will crucially enhance the patients’ own immune defences helping them to eliminate leukaemia cells and hopefully will fundamentally change existing approaches to leukaemia diagnostics and anti-leukaemia therapy (and possibly treatment of other cancers),” concluded Dr Sumbayev.