Revealing the reactivity of iron in the Lena River basin

With the melting Arctic ice cap causing its rivers to swell, understanding how organic carbon (C) is transported to the ocean and crucially trapped by these rivers is important for climate change modelling and mitigation. Reactive iron (Fe)-bearing mineral particles trap organic C in soils and continental shelves, yet the amount of reactive Fe and how it reacts with organic C in large Arctic rivers is poorly understood. Using a transmission electron microscope and the Scanning Transmission X-ray Microscopy beamline (I08) at Diamond Light Source, the size, mineralogy, and form of Fe particles in a sample obtained from a representative Arctic river basin – the Lena River and its major tributaries – were characterised. X-ray Absorption Near Edge Structure (XANES) spectroscopy and X-ray Fluorescence (XRF) mapping at I08 confirmed that Fe is transported as particles and colloids in the Lena River, and that 70% of these particles are composed of poorly crystalline ferrihyrite, which is a reactive form of Fe. Distinguishing between C and Fe at nanoscale resolution, the ferrihydrite was revealed to be in the form of discrete particles within networks of organic C, and transported by attachment to the surface of larger organic matter (>0.7 μm) and clay particles. These important insights into the reactivity of Fe-bearing particles in the Lena River basin, and thus how well Fe traps and transports organic C, show that the Lena River supplies reactive Fe to the ocean, a significant proportion of which is already associated with organic C. The result confirms that Fe-bearing particles contribute towards natural C sequestration on the continental shelf.

Iron (Fe) is abundant in the Earth’s continental crust but only exists in low concentrations in the ocean. Rivers are important suppliers of Fe to the ocean. Fe is mainly transported as particles spanning a range of size, mineralogy and speciation, which together determine their reactivity. Chemically reactive Fe-bearing particles are characterised by poorly-crystalline mineral nanoparticles (e.g. ferrihydrite, lepidocrocite)1. These natural nanoparticles settle onto the continental shelf and are a source of dissolved, bioavailable Fe and have surfaces that sequester and transport organic carbon (OC). Globally, organic carbon associated with reactive Fe on continental shelves is 2900 – 6900 times the amount of carbon in the atmospheric carbon pool2. Reactive Fe therefore plays an important role in regulating the carbon cycle on Earth’s surface.

Large Arctic rivers (Yenisei, Ob, Lena, Yukon, Mackenzie rivers) are important suppliers of Fe to the continental shelf in the Arctic Ocean3. These rivers drain areas of permafrost (ground that remains at or below 0oC for more than two consecutive years) that preserves a vast stock of organic matter (OM) (Fig. 1). The Arctic is subject to severe climate change and higher surface temperatures are increasing the thickness of the summer active layer (the upper surface of permafrost that thaws every summer), possibly increasing the supply of organic matter to the continental shelves3. The capacity for reactive Fe to mobilise, transport and sequester organic carbon in the Arctic remains poorly understood, and so the aim of this study was to quantify and characterise Fe-bearing particles and their relationship with OM in a large Arctic River, the Lena River in northeast Russia.

Figure 1: The Lena River is the seventh longest river on Earth. The river and tributaries drains a basin underlain by permafrost and spans a wide range in topography and lithology.

The Lena River basin contributes the second largest discharge to the Arctic Ocean, supplying a substantial portion of particulate material to the Laptev Sea estuary and continental shelf3. Water samples were collected from stations along the Lena River and its major tributaries during the post-spring flood period. These stations span a wide range of topography, permafrost and latitudinal extent. Fe was separated into different size fractions: particles (> 0.22 μm), colloids (< 0.22 μm – 1 nm), aqueous (< 1 nm) Fe. The particulate fraction contained the highest proportion of Fe (~70 %) and the aqueous fraction contained the highest proportion of OC (~60 %), in all samples. Transmission Electron Microscopy (TEM) and synchrotron based Scanning X-ray Spectromicroscopy (SXM) on beamline I08 were performed on particles from the main channel and tributaries, to characterise the size, mineralogy, Fe speciation and association with organic carbon. 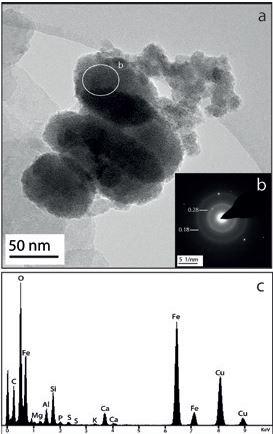 Figure 2: TEM image of a 150 nm long aggregate composed of 20-50 nm particles (a). The nanoparticles are sub-rounded and have an amorphous to poorly crystalline structure and the SAED pattern shows two major rings at 0.18 nm and 0.28 nm (b) and the EDX spectra shows that the nanoparticles are composed of Fe and O, alongside other minor elemental concentrations. The Cu signal comes from the underlying copper grid.

Organic matter structures were identified using TEM as micron-sized web-like networks of fibrils (Fig. 3a) and micron-sized bacteria cells (Fig. 3b). Darker 'inclusions' were observed within these structures and these were analysed using STXM on beamline I08. TEM and SXM were applied on the same particles, enabling novel comparison between the mineralogy and speciation of Fe associated with organic matter. X-ray fluorescence (XRF) mapping on Beamline 108 is optimised to map particles at a 50 nm resolution and can distinguish between carbon (C), nitrogen (N) and iron (Fe) in the particulate material. Maps in Figures 3c and 3d show that Fe is sitting as discrete nano-sized particles amongst C and N rich regions, suggesting that these OM structures trap and transport Fe in the Lena River basin.

X-ray spectroscopy was used to analyse the oxidation state Fe in the nanoparticles associated with the organic matter structures. Beamline I08 is optimised for this task due to the 280 – 4400 eV photon energy range and spectral resolution of 4000 over the photon energy range. Stacks of SXM energies were acquired at different photon energies within range of the Fe L-edge. These energies were used to make Fe L-edge NEXAFS (Near Edge X-ray Absorption Fine Structure) spectra with a spatial resolution of 50 nm (Fig. 3e). The acquired spectra were compared with spectra of Fe-bearing colloids in Southern Ocean waters5, and correspond with Fe(III)-rich particles (Fig. 3e). The combined use of TEM and SXM shows that organic fibrils trap discrete Fe(III)-particles, composed of reactive ferrihydrite, in the Lena River basin, with no evidence of Fe-OC complexation or a reduced or mixed valence Fe. Hence, larger particles of reactive Fe and organic carbon are transported together in large Arctic rivers.

In this study, SXM and TEM imaging were used to characterise Fe-bearing particles and colloids in the Lena River and major tributaries. Chemically reactive Fe is identified as ferrihydrite, that accounts for 70 ± 15% of the total suspended Fe in the Lena River. Aggregates of ferrihydrite (Fig. 2) will be deposited in estuarine and shelf sediments and contribute to organic carbon degradation or traps and sequester organic carbon in Arctic shelf sediments. Nanoscale ferrihydrite associated with networks of OM or attached to the surface of clay minerals (Fig. 3) will be transported further across the continental shelf, providing a source of bioavailable Fe to the Arctic Ocean. The Arctic is subject to severe climate change threatening to alter terrestrial and ocean biogeochemical cycles. We demonstrate that the Lena River, a major Arctic River, is an important contributor of reactive Fe to the continental shelf of the Arctic Ocean. This work places constraints on the present day supply of Fe from a large Arctic river to the Arctic Ocean. 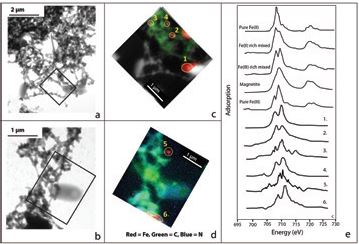