The ultimate goal of the Detector group at Diamond is to exploit the photons produced by the synchrotron to the full. A considerable amount of the Detector group’s work is therefore devoted to identifying which detector characteristics limit the present experiments, looking at new technologies to help improve the performance of the present experiments, and how they can possibly open up new experimental fields.

In the framework of this activity two major areas of intervention were identified. The multi-element germanium detectors used by spectroscopy beamlines and the area detectors used for time-resolved experiments in crystallography and other techniques. In both cases the main limitation to experiments comes from detectors. In the case of the spectroscopy beamlines, the detectors limit the number of photons that can be counted and therefore the speed of the experiments and the overall efficiency of the technique. In the case of time-resolved experiments, the present area detectors are not the best devices for time-resolution whose order of magnitude is smaller than the millisecond. Indeed if the frame rate is used to define the time-resolution this is limited at a few kHz. On the other hand when these detectors are used in gated mode they become very inefficient because of a poor duty cycle. In order to address these two issues two major development projects have been established: the development of an advanced pulse processor for multichannel spectroscopy detectors, and the development of an area detector based on Timepix31.

It was found that the energy resolution at a high counting rate of the multielement germanium detectors installed at Diamond was limited by the cross talk between channels2. The pulse processor development project (Xpress4) was set up to investigate this effect. It led to an algorithm capable of correcting the data3 and therefore enabling higher counting rates for a given energy resolution. Fig. 1 is an example of the improvement that can be achieved by applying this algorithm. 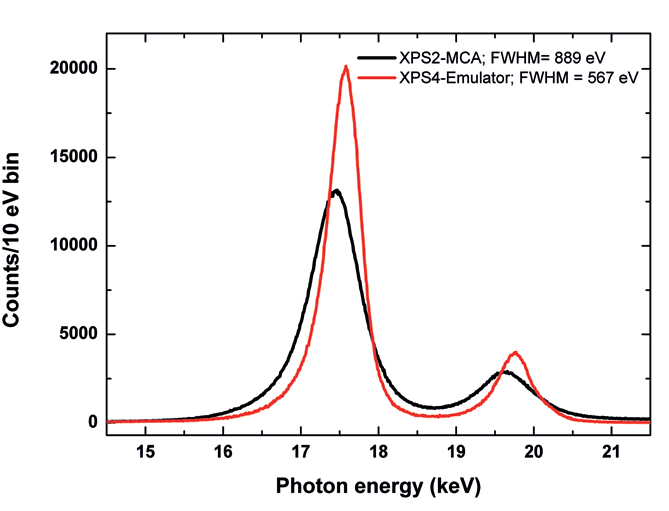 Figure 1: MCA spectrum of Mo fluorescence from one channel of the Canberra 64 pixel HPGe detector. The detector counting rate was 580 kHz per channel. The black line is the response from the current Xspress2 digital pulse processor, while the red line is the response obtained with the exact same raw data but processed using off-line software that emulates the Xspress4 digital pulse processor algorithm.

The Xpress4 project focuses on hardware and firmware development to build a multi-channel pulse processor with cross-talk correction capabilities. Under the scope of this project a new digitiser front-end is under development that will enhance the capabilities of the front-end used in the present generation of Xpress pulse processors. A programmable gain and offset to adapt the output of different detectors to the digital converters will be developed. On the digital side the front-end will interface to the FEM II data acquisition card developed by STFC and based on the Virtex7 FPGA. The firmware development will include the porting of the algorithm to the Virtex7 FPGA and the implementation of the algorithms to correct the cross talk between many channels in real time. This will entail the development of the firmware blocks to properly manage the flow of data from channel to channel occurring between processing channels within the same FPGA and between channels in different FPGAs (i.e. on different cards), with timing accuracy to the order of 10 ns. A flexible, accurate and error-free inter-board communication method will have to be developed for this purpose.

Timepix3, the latest read-out chip for pixelated detectors developed by the Medipix3 collaboration, is based on an approach that is different with respect to conventional photon counting detectors. Every time an event is detected the electronic circuitry places a time stamp and sends the information to the data bus. Timepix3 is then “data driven” to enable much more efficient data transmission when the data is sparse. The accuracy of the time stamp is 1.5625 ns. This enables access to the nanosecond regime potentially revolutionising time-resolved experiments at synchrotron facilities. Characterisation experiments were carried out using a modified version of the Merlin system4,5. Fig. 2 shows the histogram of the time of arrivals during one of the tests performed at B16 when in the hybrid mode of operation. The width of the isolated peak gives the time resolution of the entire detector system (sensor, Timepix3 ASIC, and data acquisition system). This shows that a detector based on Timepix3 can comfortably achieve the time resolution of the order of tens of nanoseconds. It is believed that an improved data acquisition system and data processing can bring the time resolution close to the nominal accuracy of the Timepix3 ASIC.

Since the ASIC Timepix3 is available at Diamond and its performance is satisfactory this was the ideal choice to develop a time resolved area detector. This project will build on the experience gained in the development of the Excalibur detector6. The Timepix3 ASIC can use the same sensor developed for Excalibur (8x2 ASICs) and therefore the approved development project plans to use these sensors. The first application will be for the Small Molecule Diffraction beamline (I19) with the development of a detector that uses 10 sensors (160 ASICs). This detector will enable an increase in the speed of timeresolved experiments of two orders of magnitude or more.

In addition to crystallography, applications of the time resolved area detector are in small angle scattering, powder diffraction, emission and absorption spectroscopy, and physics experiments that require detecting the location and time of arrival of the photons.