Explore Diamond by using our interactive map and discover the synchrotron, beamlines and much more.

For a more in depth insight, visit our Virtual Visit page where you can watch an ‘Introduction to Diamond’, take a tour of the facility and submit your questions to our experts.

Diamond is a synchrotron; a huge scientific machine, more than half a kilometre in circumference, designed to produce very intense beams of X-rays, infrared and ultraviolet light. For centuries, scientists have used microscopes to study things that are too small to see with the naked eye, however microscopes are limited by the visible light that they use. Optical microscopes can be used to study objects that are a few microns (0.001mm) in size, about the size of cells. To study smaller objects like molecules and atoms, scientists need to use the special light generated by the synchrotron.

The synchrotron is the machine we use to generate the bright light used in our experiements. Particles called electrons are fired into the machine, where they are accelerated up to very high speeds through a series of three particle accelerators. These are called the linear accelerator, or linac, the booster synchrotron and the large storage ring.

The linac and the booster synchrotron both work to accelerate the electrons so that they are travelling at nearly the speed of light. Once they enter the storage ring, the electrons are moving so fast that they could travel around the entire world 7.5 times in a single second.

The storage ring is not a true circle, but a type of polygon called a pentacontagon, made of 50 straight sections angled together with 50 bending magnets. When the path of the electron beam is bent by Diamond’s powerful magnets, the electrons lose energy in the form of light. This light can then be channelled out of the storage ring and into the experimental stations, called beamlines. 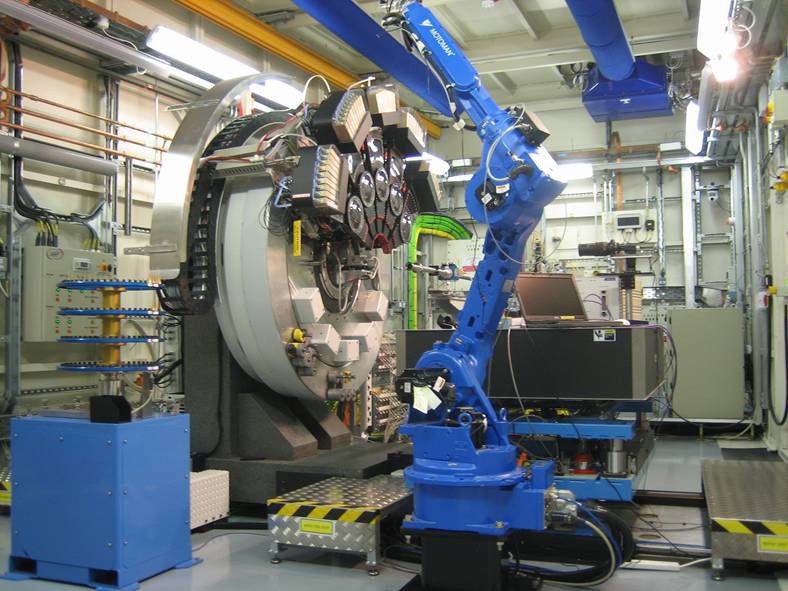 The light from the synchrotron is shone into thirty two laboratories called beamlines, it is here that scientists carry out their experiments. Each beamline contains three different sections; the optics hutch, where the light is filtered and focused; the experimental hutch, where the sample sits and the experiment is carried out; and the control cabin, where the scientists control the experiment. The beams of light are so strong that, in the case of Diamond’s X-ray beamlines, it is not safe to be in the same room whilst they are being fired at the sample.

Our Techniques - How do we see things?

All of the beamlines at Diamond are different, they may use a different frequency or colour of light, or use different techniques to study the samples. The frequency and size of the spot that is focused onto the sample is selected in the optics hutch.

In the experimental area the beam interacts with the sample, there are different ways it can do this. We can make the light spread out as it passes through the sample, creating diffraction or scattering patterns that tell us things about the positions of the atoms and molecules. Or by looking at how the different frequencies are absorbed as they pass through we can see what elements are present. We can also take images, such as those you might see in a hospital x-ray, but thousands of times more detailed.


Other Laboratories and Instruments at Diamond 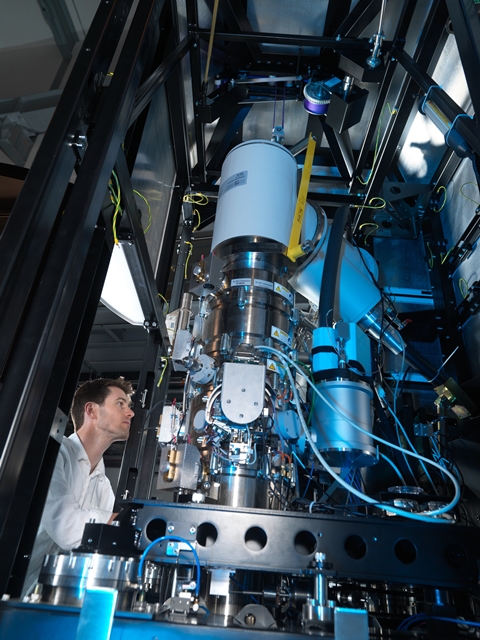 As well as the beamlines Diamond hosts a range of other world leading instruments and laboratories, such as eBIC and ePSIC, suites of powerful electron microscopes that use different tehniques to study samples at small levels. Or the Membrane Protein Lab, a research and training facility for scientists interested in solving the 3-dimensional structures of membrane proteins; these proteins are popular targets for new medicines, so training people to study them is important work.

For more information on our beamlines and instruments click here

Our Science and Finding Out More

Our synchrotron, beamlines and instruments have all been constructed to enable researchers at Diamond to carry out world leading science. Diamond's ability to study almost any sample allows us to contribute to many fields, studying everything from viruses and moon rocks, to jet engines and solar panels.

To find out more about our current research please visit our latest news or science highlight pages. Or our public pages are a good place to explore to find our more about how we work or even how you can visit us.