The process of electrospinning has been around for many years.  It was originally used for the development of textiles, however in the last 5-10 years, this method has been used for more innovative applications.

It works by using electric forces to draw charged threads of polymer solutions or polymer melts to fabricate fibres with diameters of a few nano to micrometres. It enables the generation of constructs with large surface areas and a fibrous morphology that closely resemble the macromolecular structure of many tissue matrices; it therefore provides a good structure for cell attachment, tissue regeneration, and even drug delivery.

A recent collaborative study involving University of Manchester, Nagoya Institute of Technology, Thermo Fisher Scientific and the Research Complex at Harwell looks at the tensile deformation (changes when the fibres are pulled) of electrospun fibrous materials to get a better understanding of the failure mechanisms of a biodegradable polyester, P(3HB-co-4HB), shedding light on the structure-property relationship of the materials.

By using synchrotron phase contrast imaging techniques, scientists were able to simultaneously capture the deformation of the entire 3D fibre mat; they could study the microstructure of individual fibres along with the alignment and length of fibres, the porosity, the number of fibres aggregating and the joint strength at regions of contact. By fully understanding the properties of these fibres under stress, they can build materials that best mimic human tissue – retaining strength during elongation, and therefore suitable for medical usage, such as implants. 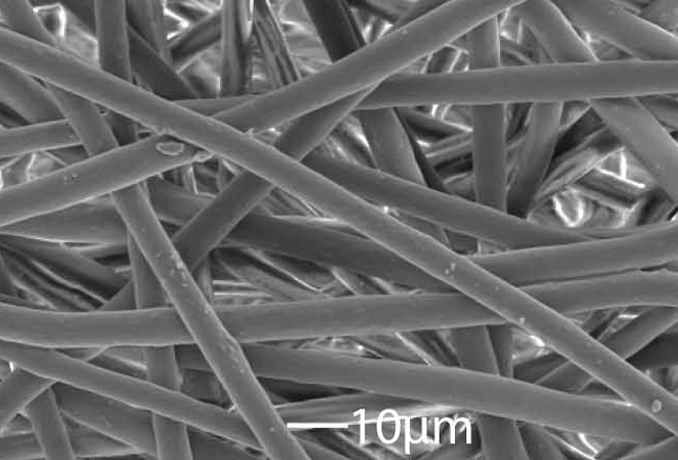 deformation performed at a rate of 0.1mm s-1 until failure.

Using the Diamond Manchester Imaging Branchline, I13-2, applying propagation based phase contrast imaging, radiographs of the deformation and failure of the fibre mats were captured. Tomography was performed post-tensile deformation to various strains on different samples and ImageJ and Avizo® software were used to quantify the fibre diameter and separate connected fibres. The team then applied the ‘pair correlation’ function to quantify the spatial distribution of thick segments and their apparent tendency to bond together at higher strains.

Fibre mats were formed from P(3HB-co-4HB) solutions prepared with chloroform and acetone using different weight ratios. As the levels of acetone increased, there was an increase in the positive charge the solution could accommodate, resulting in a higher force from the electric potential present and a decrease in fibre diameter. 100% acetone fibrous structure resulted in poor solubility of P(3HB-co-4HB); however, fibre mats produced using 100% chloroform solution, demonstrated large and homogeneous fibre diameters.

Tensile testing showed that initial elastic response was followed by a large deformation (>500%) before failure. This is half the strain reported for bulk materials of similar composition. The results show that the tensile strength of the P(3HB-co-4HB) is three times larger than the stress at which the material begins to deform plastically, suggesting that the fibre mats also become stronger on deformation.

Using radiographic and 3D images, the team of scientists were able to look in greater detail at fibre reorientation and alignment in the direction of the applied force. From this, they saw that the fibre mats strained to various extents demonstrated fibre realignment and thinning. It showed that all the fibres in the mat thin after deformation; however, undeformed segments were still visible even at 352% deformation.

The team could detect that, with increased strain, the proportions of thin segments increase. The findings suggest that unlike conventional fibres showing gradual thinning through strain, there was a sudden shift from ‘thick’ unstrained fibres to necked ‘thin’ fibres. 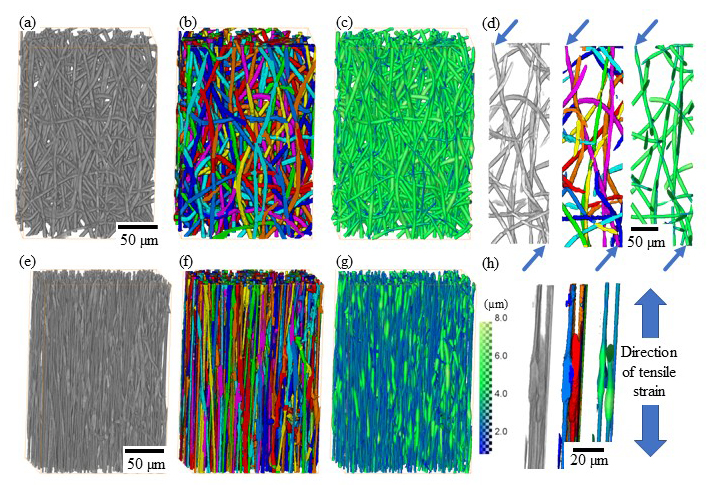 Fig. 1. 3D rendering of small volumes of the PHA fibre mats before any deformation (a-d) and (e-h) after application of 352% strain. Images show 3D volume rendering after filtering (a,e), segmentation of individual fibres (b,f) and with fibre thickness displayed as colour intensity (c,g). Fibres can be traced and segmented accurately, enabling identification of individual fibres (d) and contact points between these (h). Scans of the fibre mats were performed unstrained and after loading. Loaded samples were left to stabilise for 5 minutes at constant strain before scanning in their loaded state.

By using synchrotron techniques, it is possible to study not only the deformation of inpidual fibres, but the entire fibre network, and to understand its failure mechanism in a holistic approach. Using a multi-technique approach, electron microscopy was used to study inpidual nanofibres and their deformation and optical microscopy was employed to image the entire fibre mats. High resolution synchrotron tomography provided the complementary capability to study the structure-property relationship of the materials at the intermediate length scale.

From the study it can be seen that fibres reorient significantly in the direction of the applied strain followed by significant fibre thinning by means of localised necking and neck growth. Once strained, the fibres thin without a gradual reduction in fibre diameter leading to a distinct bimodal distribution of fibre diameters. The study also highlights the bonded regions/contact points between fibres which remained thick (largely unstrained) right up until failure, suggesting that the fibres were strongly coupled to each other. 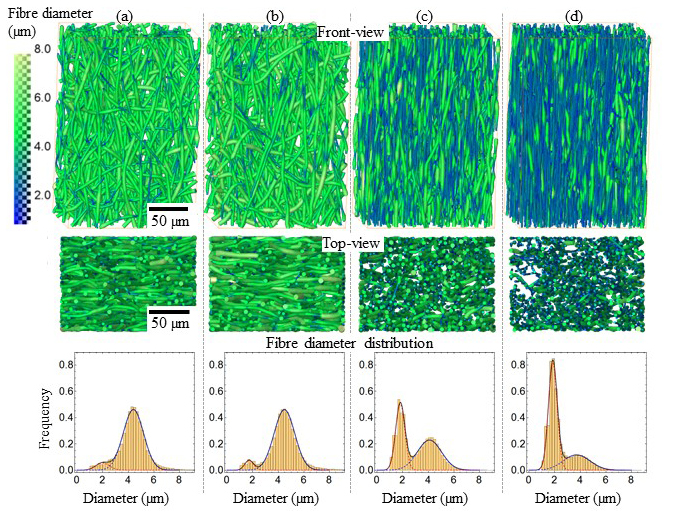 Fig. 2. Front and top view 3D rendering of small volumes of the P3,4-HB fibre mats and fibre diameter distributions for the unstrained (a), 33% (b), 193% (c) and 352% strained (d). The colour map on the left represents fibre diameter in µm. The fibre diameters could be fitted with a biomedical Gaussian distribution.

The results shed light on fibre deformation of highly elastic P(3HB-co-4HB) polyester fibre mats. By fully understanding these failure mechanisms, we can help to build materials that have large elongation before failure and can therefore be used by the biomedical community for applications such as implants which mimic human tissue.

The results of this study will lead to further studies to resolve structure-property relationships of the fibre mats in 4D.

To find out more about X-ray tomography, please contact the Industrial Liaison team on 01235 778797 or send us an e-mail.

You can keep in touch with the latest development by following us on Twitter or LinkedIn.