Synchrotron techniques uncover similarities between ferroics at the atomic level

The physics underlying electric and magnetic fields is very different, so although ferromagnetism and ferroelectricity are similar effects, it was thought they too are fundamentally different. However, theoreticians suggested that - if we could get a close enough look - we might see that the two effects are surprisingly similar. The Dzyaloshinskii–Moriya interaction (DMi) is important in ferromagnetism, giving rise to effects such as skyrmions, which are potentially very useful for next-generation electronic devices (spintronics). If a mechanism analogous to the DMi were present in ferroelectric materials, it too would offer intriguing possibilities for future applications. In work recently published in Nature, a team of researchers from the University of Warwick has used cutting-edge imaging techniques to take our closest look yet at the atomic structure of a ferroelectric. Their results show complex topological structures that are the spitting image of those found in ferromagnets, opening the door for future studies on their underlying fundamental physics. 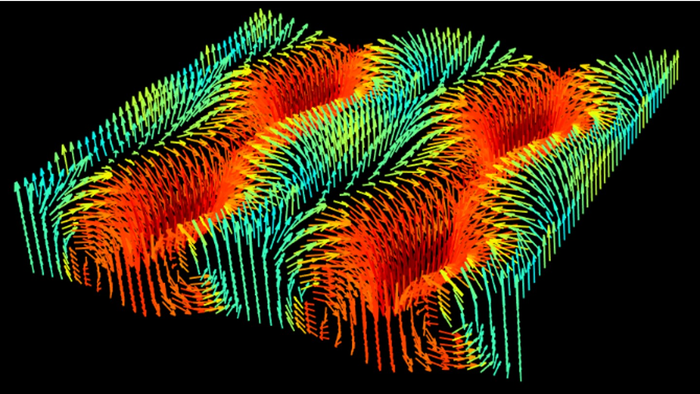 This image represents the 3D model of the polarisation pattern in the ferroelectric PbTiO3 representing the cycloidal modulation of the vortex core. Image provided by University of Warwick.

Ferroelectrics are a subset of piezoelectric materials, which generate an electric charge when a mechanical stress is applied. The mechanical stress displaces ions within the crystal structure, separating positive and negative charges. Sonar was the first application for piezoelectrics, quickly followed by microphones and phonograph pick-ups. These technologies exploit the intrinsic electric dipoles in ferroelectric materials, and the interaction between the crystal structure and applied fields.

Although magnetic and electric fields are related, the underlying physics causing them is very different. However, their characteristics could be almost identical at small enough scales, and similar dipolar topologies are apparent in both ferroelectrics and ferromagnets. Our current understanding suggests these topologies are driven by a complex interplay between strain, electric and polarisation gradient energies.

Under particular electrical and mechanical boundary conditions, ferromagnets can form complex topological spin structures, such as skyrmions and vortices. In ferromagnets, the Dzyaloshinskii-Moriya interaction (DMi) is one of the most important mechanisms for specific chiral textures such as magnetic skyrmions. Due to spin-orbit coupling and inversion symmetry breaking, the DMi occurs at metallic ferromagnet/heavy-metal interfaces.

Previous research has also observed simple vortex-like, electric-dipole-based topological structures in dedicated ferroelectric systems, particularly ferroelectric–insulator superlattices such as PbTiO3/SrTiO3. However, the use of insulating layers in ferroelectric–insulator superlattices makes it challenging to integrate them into devices that could exploit the electronic characteristics of complex topologies. Ferroelectric heterostructures with metallic contacts would be easier to integrate, but as yet, these have only been shown to stabilise more common topologies.

As the DMi plays a pivotal role in stabilising topological magnetic structures, an analogous mechanism may be the key to developing new ferroelectric technologies. However, the electric dipole equivalent has yet to be experimentally observed.

In these experiments, physicists from the University of Warwick created a thin film of the ferroelectric lead titanate (PbTiO3) sandwiched between layers of the ferromagnet strontium ruthenate (SrRuO3), each about 4 nanometres thick.

They then used a combination of cutting-edge imaging techniques - lab-based transmission electron microscopy (TEM) and synchrotron X-ray studies - to accurately measure the position of every atom.

At Diamond's I16 Materials and Magnetism beamline, the research team collected data remotely during the disruptions caused by the Covid-19 pandemic.

Prof Marin Alexe from the University of Warwick is the corresponding author on the paper. He says:

Our friends at Diamond were so helpful, allowing us to collect data remotely when we were unable to visit in person. Whereas TEM results are very localised, covering only a small region of the sample, using synchrotron X-ray Diffraction at Diamond gave us a clear view over a larger area. We collected massive amounts of data, and it matched perfectly with the TEM results.

The electric polarisation in the ferroelectric lead titanate layer would usually form multiple 'domains', like a honeycomb. However, these highly detailed results showed the domains to be a complex topological structure of lines of vortexes, spinning alternately in different directions. This behaviour is almost identical to that generated in ferromagnets by the DMi. Theoreticians had predicted the existence of these vortices in ferromagnets, but this is the first time they have been observed experimentally.

These results open the door for further fundamental investigations into complex ferroelectric topologies triggered by the electric DMi and their potential for use in next-generation electronic devices.

To find out more about the I16 beamline or discuss potential applications, please contact Principal Beamline Scientist Alessandro Bombardi: alessandro.bombardi@diamond.ac.uk.