Carbon Fibre Reinforced Polymer (CFRP) composites are plastics reinforced with carbon fibres to produce extremely strong and light materials. They find applications where a high strength-to-weight ratio and rigidity are essential, including the civil, aerospace, and the automotive industries. However, a limited understanding of how these materials perform on the micromechanical scale means that industrial designers must rely on estimations and err on the side of caution. An improved understanding of their behaviour at small scales could lead to more efficient designs and lower emissions without compromising safety. A team of researchers from the University of Bath, led by Dr Alexander Lunt, has been working with Diamond's B16 beamline to develop a novel synchrotron technique to quantify micro-scale lattice strain in CFRPs. Their results, recently published in Carbon, show that microfocus synchrotron X-ray diffraction (SXRD) can be used to quantify microstructural changes, offering new insights into these industrially-important materials. 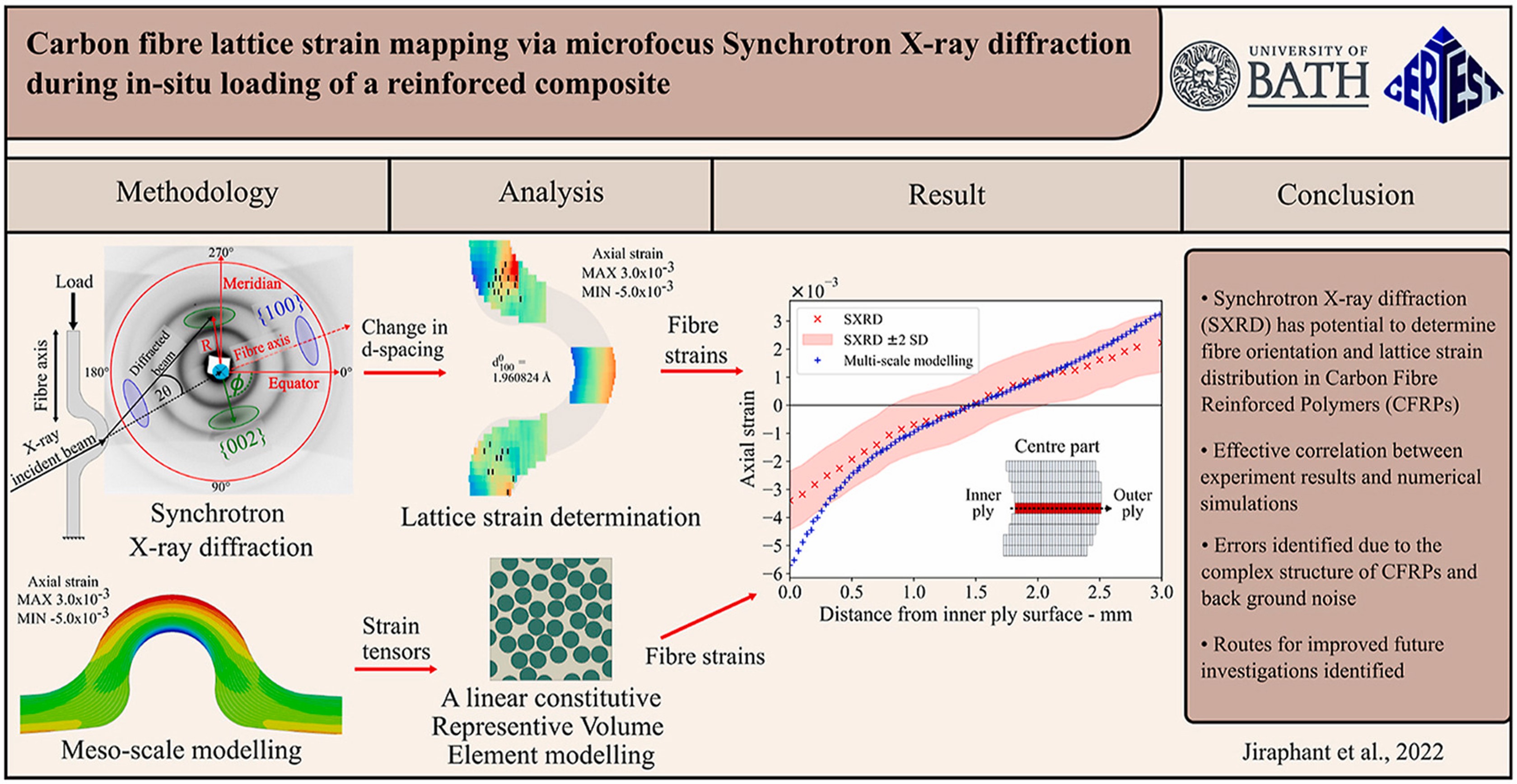 Carbon Fibre Reinforced Polymer (CFRP) composites have high specific stiffness and can be tailored to specific load cases. They are now widely used in high-performance structures, but the traditional design process focuses on their mechanical response at the macro scale. Approximations using the average response of a whole part (for example, an aircraft wing) necessitate large safety margins and over-engineering. However, micro-defects in the material can significantly alter the failure modes in these systems.

The idea of this research was that by improving our understanding of how these materials behave at smaller length scales, we can generate better models and more design more effectively, thereby reducing over-engineering and resulting in more efficient systems. For example, an aircraft wing could become lighter, creating more fuel-efficient aircraft and reducing carbon emissions.

Synchrotron X-ray diffraction (SXRD) strain analysis is classically used to examine highly crystalline materials (metals and ceramics), but had not previously widely been applied to CFRPs, which have a more complex atomic structure. So to validate their novel technique, Dr Alexander Lunt and his team from the University of Bath worked closely with staff on Diamond's B16 Test beamline, including Senior Beamline Scientist Dr Igor Dolbnya who is also an author on the paper.

I do a lot of work with B16 because my research is about developing new techniques. The really nice thing about B16 is its very flexible setup. Essentially, we can reconfigure the beamline to trial these new methods. The beamline scientists and technicians at B16 are incredible at taking a new idea, a new technique, and modifying their setup to achieve what we want to do. I always ask them for horrible setups! But they’re consistently brilliant at producing unusual arrangements of detectors, samples and loading rigs, and everything we need for our experiments.

The team used samples of a UniDirectional CFRP formed into a well-established humpback bridge shape, a geometry that generates interlaminar shear stresses. They performed a combined study with SXRD and Synchrotron Computed Tomography (SCT) under different applied loads. SXRD reveals what's happening inside the carbon fibres at the atomic scale, thereby showing how the atomic lattice spacing changes with the applied load. SCT gives a 3D representation of the structure, so combining these two techniques shows how the material changes and redistributes loads. Dr Lunt continues;

Producing these samples, running the experiment, and interpreting the data is no easy task, so I’d like to extend my thanks to the entire team for their hard work. It’s been a really exciting time to gradually untangle the images in order to reveal the fundamental insights that we knew would be hidden in the data.

Flexibility is key for B16, Diamond's Test Beamline

These initial experiments were a model-matching exercise, comparing experimental data with conventional simulations to validate that the new technique offers valuable insights.

Dr Alexander Lunt and Dr Igor Dolbnya go on to explain that the experimental results they collected at B16 show a good correlation with the models, which gives them confidence that this novel technique is worth developing. During the initial set of experiments, they found ways to improve their methods, and they have already been back to B16 to test those out. Dr Lunt said;

We're analysing that data now, but it's already showing an improved correlation.

It’s been challenging to analyse an anisotropic and semi-crystalline material like carbon fibre using this new approach. It required consideration of a large number of variables, techniques and background research in order to pioneer the method. I’m excited to continue to tackle and extend the approach as we move forward with this venture.

The team are also comparing their technique with the tried-and-tested method of Digital Volume Correlation (DVC). As CFRPs are low-contrast materials, they must be doped with metal nanoparticles for DVC. Doping allows researchers to create 3D models of the strain and deformation of the materials. However, too much doping can lead to changes in the mechanical response of the material. The new technique doesn't require these additions and can therefore offer fresh insights into real-world samples.

Comparing our technique with DVC is another validation check. The next major task in our validation process is to examine real-world samples. The samples we've analysed so far are created using standard techniques, but in a lab environment where conditions are more closely controlled than they might be in a factory. We're working with an industrial partner to analyse real-world samples featuring 'wrinkle' defects. The ultimate goal is to give manufacturers the information they need to understand how such defects affect the behaviour of the whole part and whether they are acceptable defects or not. We'll be back at B16 early in 2023 to perform those experiments, and I'm extremely grateful to Diamond and the beamline staff, without whom we would not be able to do this research.

To find out more about the B16 beamline or discuss potential applications, please contact Principal Beamline Scientist Kawal Sawhney: kawal.sawhney@diamond.ac.uk.