The key to keeping organic carbon in our oceans

Oceans represent one of the world’s largest reservoirs of organic carbon. Regulating the organic carbon reservoir is critical to the global carbon cycle and is vital to supporting life on Earth; if not maintained this would have substantial impact on the levels of oxygen and carbon dioxide in the Earth’s atmosphere. Minerals are known to protect organic carbon from degradation, conserving organic carbon in soils and sediments. However, there is a lack of understanding of how this protective mechanism actually works.

In recent work published in Nature Communications, a team led by Professor Caroline Peacock, based at University of Leeds School of Earth and Environment, set out to investigate the mechanism behind the conservation of organic carbon in the world’s oceans. The team adopted a multi-faceted approach, incorporating Near Edge X-ray Absorption Fine Structure (NEXAFS) spectroscopy at Diamond’s I08 beamline, to demonstrate that adsorption of organic carbon by clay minerals limits its availability to methane-producing microbes, restricting the conversion of organic carbon into methane. The team’s remarkable discovery sheds light on the mechanism responsible for preserving the oceanic organic carbon reservoir and may have profound implications for our existing understanding of the global carbon cycle. 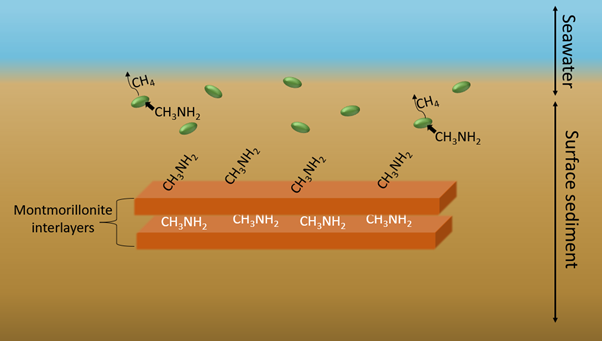 Schematic diagram showing how organic carbon in the form of methylamines (CH3NH2) is protected from conversion into methane by methanogens (green) by a combination of electrostatic/hydrogen bonding to the clay mineral surfaces and occlusion into clay interlayers.

We know there is an intimate association between minerals and organic carbon. However, the extent to which minerals protect organic carbon from microbial remineralisation has not been fully tested to a systematic degree. There have been surprisingly few studies which have subjected organic carbon to microbial incubation. 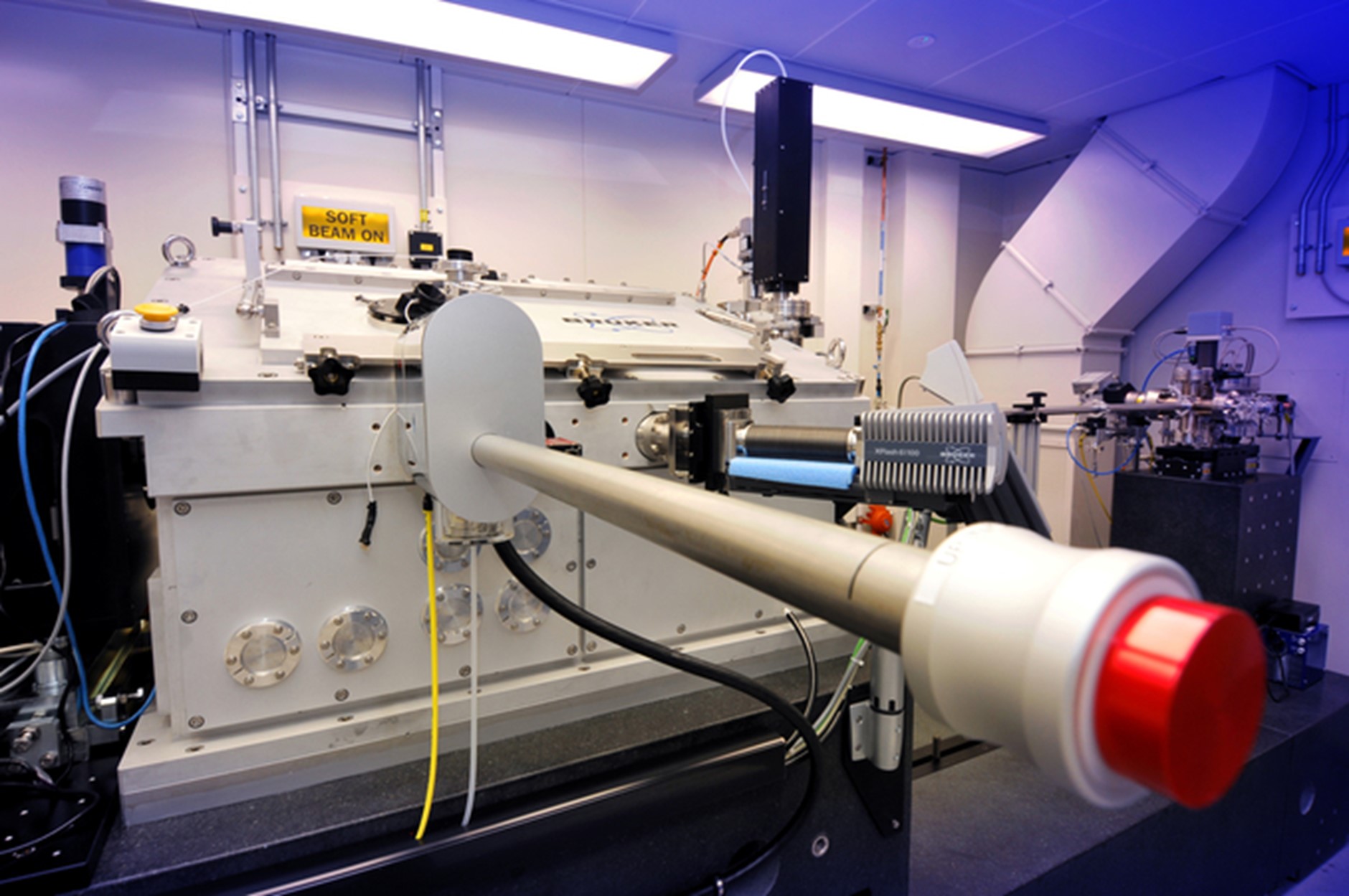 The experimental hutch in beamline I08

The team used NEXAFS at Diamond’s I08 beamline to investigate chemical interaction between the methylamines and montmorillonite more closely.  NEXAFS can be used to probe how different substances interact by the characteristic appearance of new spectral features when new chemical bonds are formed. Chemical analysis of carbon is particularly challenging, as Professor Peacock explains:

Carbon is notoriously difficult to analyse by a variety of different techniques because it is a very soft scatterer and difficult to chemically see in the presence of hard scattering elements that are often abundant in minerals, like iron. NEXAFS is the only technique with the capacity to spatially map and chemically probe carbon in association with hard minerals at the resolution of the particle sizes we are analysing.

NEXAFS measurements provided evidence for reversible electrostatic bonding of methylamines to clay minerals, with hydrogen bonding accounting for the variation in binding affinity between different classes of methylamine. In addition to reversible adsorption via electrostatic and hydrogen bonds, methylamines were also occluded into clay interlayers. This created a protective barrier, blocking methanogens from reaching the organic carbon, thus forming a pool of methylamines less readily exchanged than those adsorbed at the clay surfaces. Findings also showed that adsorption alone could not fully account for the total reduction in methane concentration; it was suggested that the observed release of iron (II) from iron-rich montmorillonite may further disrupt methanogenesis.

The findings from this study demonstrate some of the first concrete evidence to support the protective adsorption theory i.e. that when organic molecules stick to minerals, the organic molecules are less readily remineralised. Findings suggest that conversion of organic carbon into methane may be further inhibited where montmorillonite concentrations are high, such as the South Pacific Ocean. By revealing how this protective process works, it is anticipated that this discovery may also be widely relevant to interactions between other small organic molecules and microbes, and could have an exciting impact on research into global carbon cycling.