Using a full toolbox of techniques for evaluating quantum materials

Only by using the combination of polarised neutron reflectometry, X-ray spectroscopy and magnetotransport have researchers been able to characterise individual layers of a potential candidate for building future quantum computers. 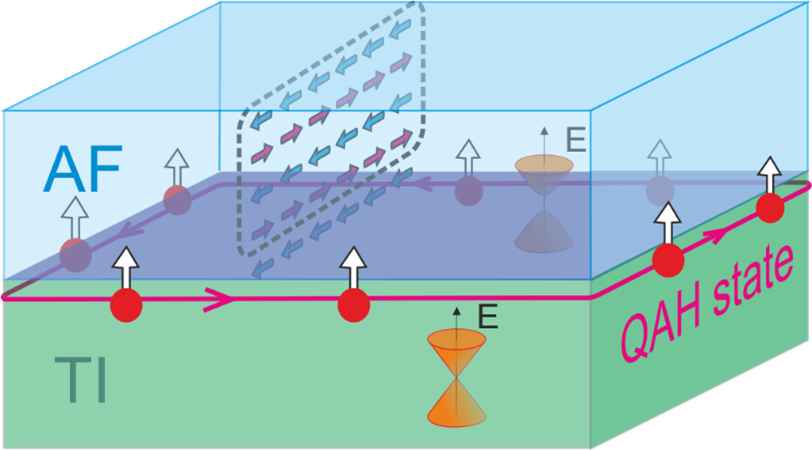 Scientists have been searching for many years for materials that can be used to conduct electricity with minimal resistance and drastically increase energy efficiency. Novel conducting materials are also potential candidates for quantum computing devices.

Recently, some materials have been shown to exhibit a phenomenon known as the quantum anomalous Hall (QAH) effect. In this QAH state, they show the properties needed for such energy efficient devices, as well as the complex magnetism needed for spintronic applications.

However, to achieve this state, magnetic order must be present in a topological insulator, something that is hard to achieve. When it has been done, it usually results in either reducing the QAH effect or causing it to only appear at lower temperatures.

This study, published in Physical Review Materials, investigates the suggestion that such a system can be created by placing an antiferromagnetic layer on top of the topological insulator (TI). Having this interface with a magnetically ordered system could induce a magnetic ordering in the TI as well.

To understand whether this was the case, a group of researchers combined characterization techniques that can be found in many laboratories with techniques only available at large-scale research facilities.

They used magnetotransport alongside polarised neutron reflectometry on the Polref instrument at the Science and Technology Facilities Council’s (STFC) ISIS Neutron and Muon Source, and X-ray spectroscopy on the I06 Nanoscience beamline at Diamond Light Source. They were able to study the layers individually and find out whether magnetisation was being induced, and/or whether the magnetic constituents were migrating between the layers.

Only by using this combination of techniques were they able to show that, in this system, there was no magnetism induced in the TI layer. This explains why the QAH effect had not been observed, even though it was expected to be present.

The importance of our approach is that energy efficient devices and novel quantum computers would not require expensive and difficult to realise cryogenic cooling. A crucial obstacle to overcome is the demonstration of proximity induced magnetization (PIM) in topological materials, as mentioned above. Unfortunately, many contradictory reports have been published and thus the existence of PIM is quite contentious

Our work delivers a robust method to evaluate candidate materials and single out the best possible materials system, which then can be the cornerstone of real-world applications. Fortunately for our team of scientists, we have with ISIS and Diamond world-class neutron and X-ray sources available at the same location. By combining both neutron and X-ray techniques, we could show how large-scale facilities contribute to the development of novel, complex materials that can address present day challenges and shape our future.

To find out more about the I06 beamline at Diamond or discuss potential applications, please contact Principal Beamline Scientist Larissa.Ishibe-Veiga@diamond.ac.uk