Organochlorine pesticides, used extensively for decades, are neurotoxic and cause health problems for humans and wildlife. As these chemicals persist in the environment, we require new methods to detect and remove them. Coordination cages are molecules with an interior cavity that can hold a guest molecule. They can be used in various applications, including catalysis, sensing, separation, and stabilisation of reactive species. In work recently published in Chem, researchers from the University of Cambridge used X-ray crystallography to solve the structure of a new trigonal-prismatic coordination cage with two types of ligands. One of the ligands can adopt two different orientational configurations on the cage faces. This new mode of dynamic adaptation enables the cage to take on an optimal configuration to bind specific organochlorine pesticides. Their results pave the way for the development of strategies to detect and remove organochlorine pesticides from the environment. 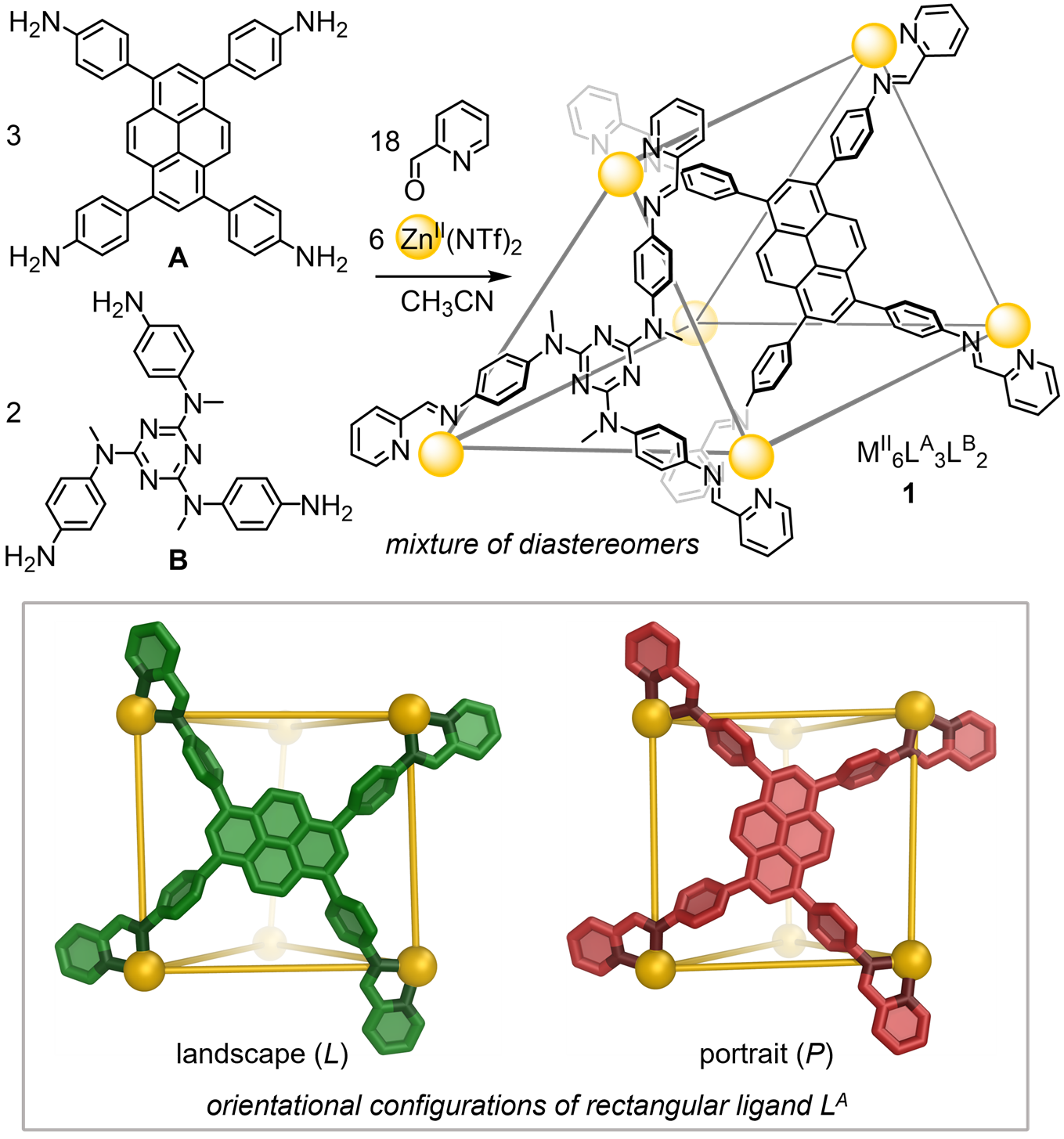 Fig. 1: Self-assembly of the new trigonal prismatic cage 1 and illustration of the two different orientational configurations of the pyrene-based ligand.

From the 1940s through to the 1960s, organochlorine pesticides were used extensively in agriculture and mosquito control. DDT is probably the most well-known organochlorine pesticide, but there are many more in the group, all of which are neurotoxic. Problems can arise if people are accidentally exposed during or soon after application. Fish, dairy products and other fatty foods can become contaminated and cause the chemicals to be ingested. Organochlorines also caused problems for wildlife, causing birds to lay thin-shelled eggs that would crack before hatching. As a result of these issues, many countries have implemented bans for some, if not all, organochlorine pesticides.

However, organochlorines are persistent and accumulate in the environment. They can travel long distances in groundwater and surface run-off. These widespread contaminants present a long-term health risk for humans and wildlife, and we require new methods to detect them and remove them from the environment.

Coordination cages are molecules with well-defined inner cavities, which can isolate guest molecules. They can be useful in a wide range of applications, including detecting the presence of specific molecules, stabilising reactive species, drug delivery, chemical purification and catalysis. Encapsulation of organochlorine guest molecules could provide a method of detecting them and removing them from the environment.

The dynamic metal-ligand linkages that hold coordination cages together give them some ability to adapt the shape of their cavity to respond to guest molecules. However, most of the cages developed so far are highly symmetrical, producing cavities that preferentially bind symmetrical guest molecules. Researchers at the University of Cambridge are developing coordination cages that bind lower-symmetry molecules, including natural products and pharmaceutical drugs. One of the promising approaches they are researching is heteroleptic self-assembly, incorporating two or more distinct ligands into the cage molecule.

Building on this strategy, they used a lower-symmetry rectangular tetratopic building block to produce trigonal-prismatic cages. As this building block can adopt either a "portrait" or "landscape" orientation, it produces multiple configurations of the same coordination cage. The mixture of cages can bind to a range of anionic and neutral guests, including some organochlorine pesticides. The team can achieve more selective guest binding by templating and amplifying a single configuration from the mixture.

This particular molecule turned out to be a useful cage, so the researchers used Single-crystal X-ray diffraction on beamline I19 to determine its structure and understand the shape and size of its cavity.

Dr Tanya Ronson is the lead author of the paper. She says:

X-ray crystallography is the only technique available to solve the 3D structure of these molecules. So we brought our coordination cage to I19 to take a good look. The initial data showed us a very complex and disordered structure. Combining the results with theoretical considerations, we determined that there were four possible structural variations, also known as diastereomers.

The team were able to grow crystals of three of those four variants during the disruptions of the Covid pandemic. Using remote access to I19, they could then collect detailed 3D structures of those three variants.

We'd already been using the robotic sample loading system on I19, so we found remote access straightforward. We book 24 hours of beamtime and run a lot of samples, so it's really convenient for the team to work shifts from home collecting the data. The beamline staff are always available to help if necessary. As it saves us travelling time, we're happy to continue using remote access in the future. 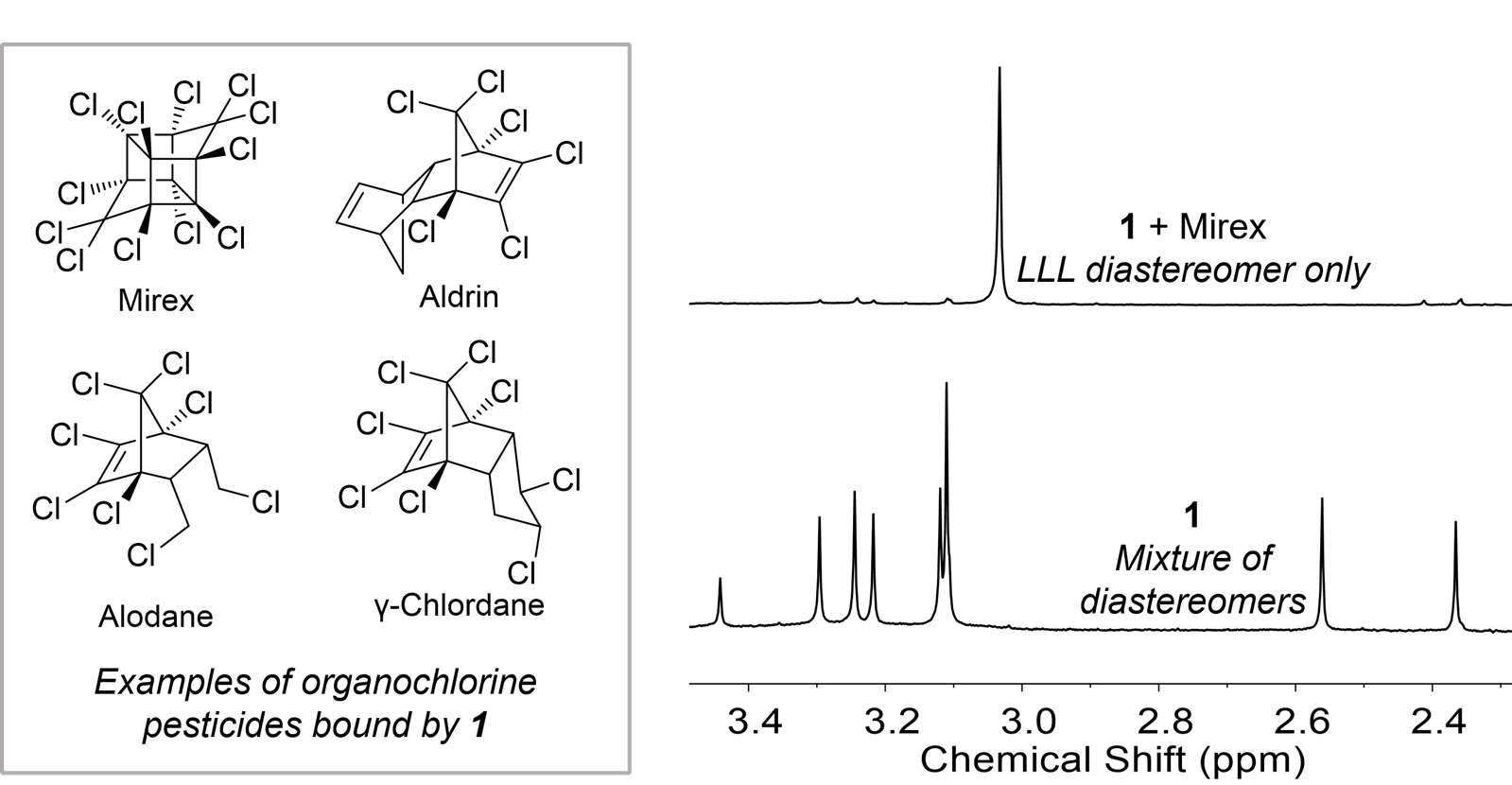 Fig. 3: Examples of organochlorine pesticides bound by 1 and NMR spectra showing conversion from a mixture of diastereomers to a single one upon binding Mirex.

The coordination cage molecule contains two types of ligand, and the results showed that one of these can adopt two different orientational configurations. This new mode of dynamic adaptation allows the cage to take on the optimal configuration to bind specific organochlorine pesticides.

This paper presents one aspect of a larger project to develop mixed ligand cages for low symmetry guests, which now includes looking for the same adaptive feature in other molecules. Other members of the team are already developing practical applications for this cage, which shows promise for detecting organochlorine pollutants in the environment and for removing them.

To find out more about the I19 beamline or discuss potential applications, please contact Principal Beamline Scientist Dave Allan: dave.allan@diamond.ac.uk.