Find out about upcoming events and webinars, and watch past events.

You can also explore Diamond by using our interactive map and discover the synchrotron, beamlines and much more.

Air pollution doesn’t come solely from car exhausts and fossil fuel power stations; another key component are tiny droplets of oils given off from, amongst other things, cooking. The presence of these fatty acids may add to the pollution of our environment.

Almost all fatty acids in the atmosphere are there through human activity, e.g.; being released from oil and fats during cooking.  So, understanding how long they last in the atmosphere, and how far they spread to different places, is important to controlling their impact. 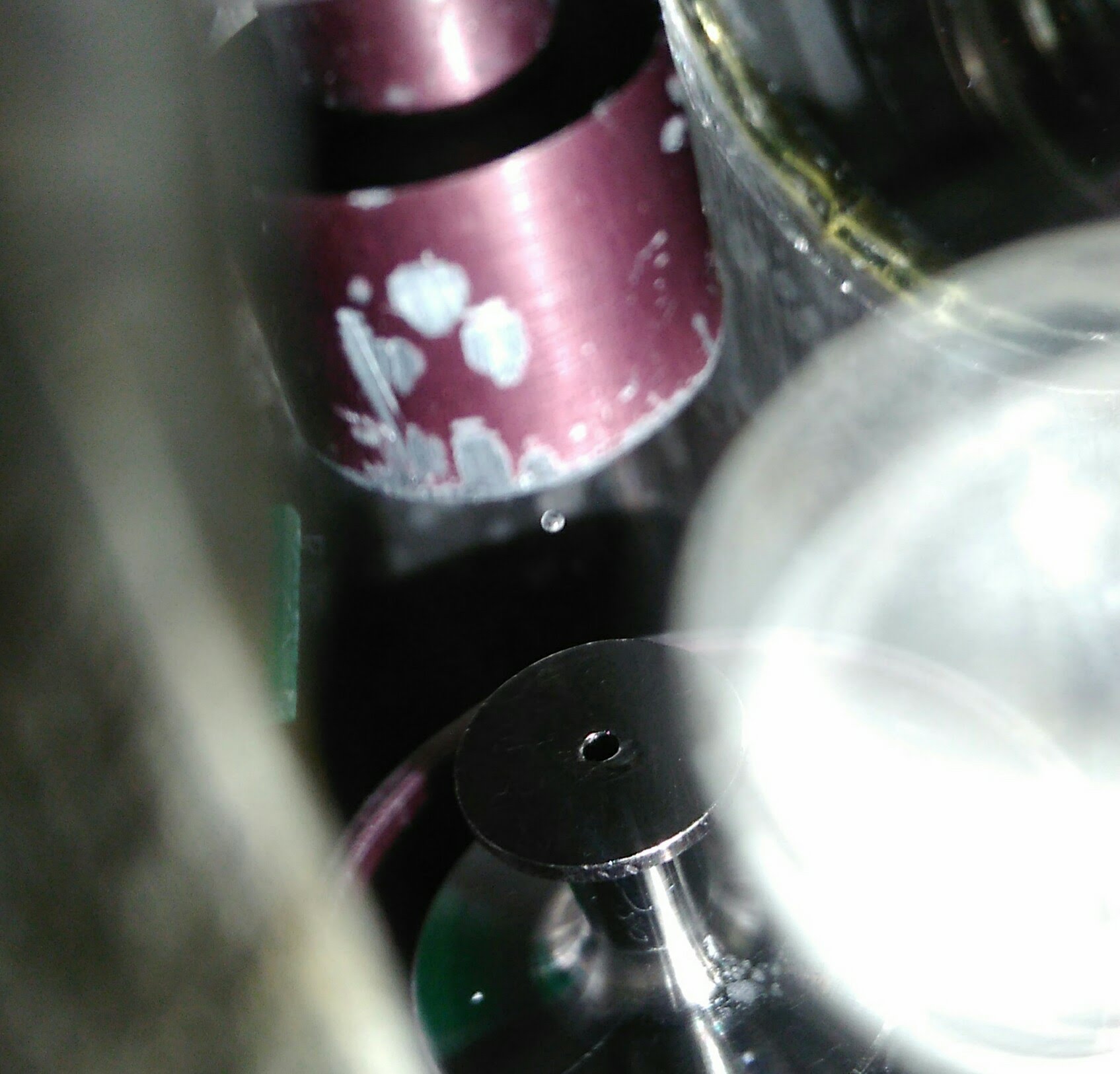 A demonstration of a levitating particle in offline setup.

A research team from Birmingham and Bath is able to study aerosol droplets using acoustic levitation at the UK’s national synchrotron Diamond Light Source (Diamond). That is, using sound waves to ‘trap’ a single millimetre sized droplet over several hours.

In collaboration with Andy Ward, from the Science & Technology Facilities Council (STFC) Central Laser Facility (CLF) Octopus facility, a laser-based Raman microscope was combined with acoustic levitation for use on the Small Angle Scattering and Diffraction beamline (I22) at Diamond. Installing the system on the beamline allowed the Raman technique to be used simultaneously with Small-Angle & Wide-Angle X-ray Scattering (SAXS & WAXS).

The dual technique allowed the researchers to understand the physical and chemical changes that take place in aerosol droplets under changing humidity and changing concentrations of ozone.

Using oleic acid droplets as a model, the research showed that a surface layer of crystal-like material formed, a crust - imagine the chocolate around the soft centre of a Creme Egg.

The fatty acid aerosol particles in the atmosphere are normally degraded mainly by oxidation. They react with hydroxyl radicals, nitrate radicals, and ozone, which eventually destroy the fatty acid.

The crust this research found forms around the droplets can protect the fatty acids from oxidation and allow them to survive for longer in the atmosphere. The longer they survive for, the further the droplets can travel on air currents. This is an important result because it shows that air pollution in the form of fatty acids can travel long distances from the location where it was produced, potentially impacting larger areas of the atmosphere and environment than would be the case otherwise. 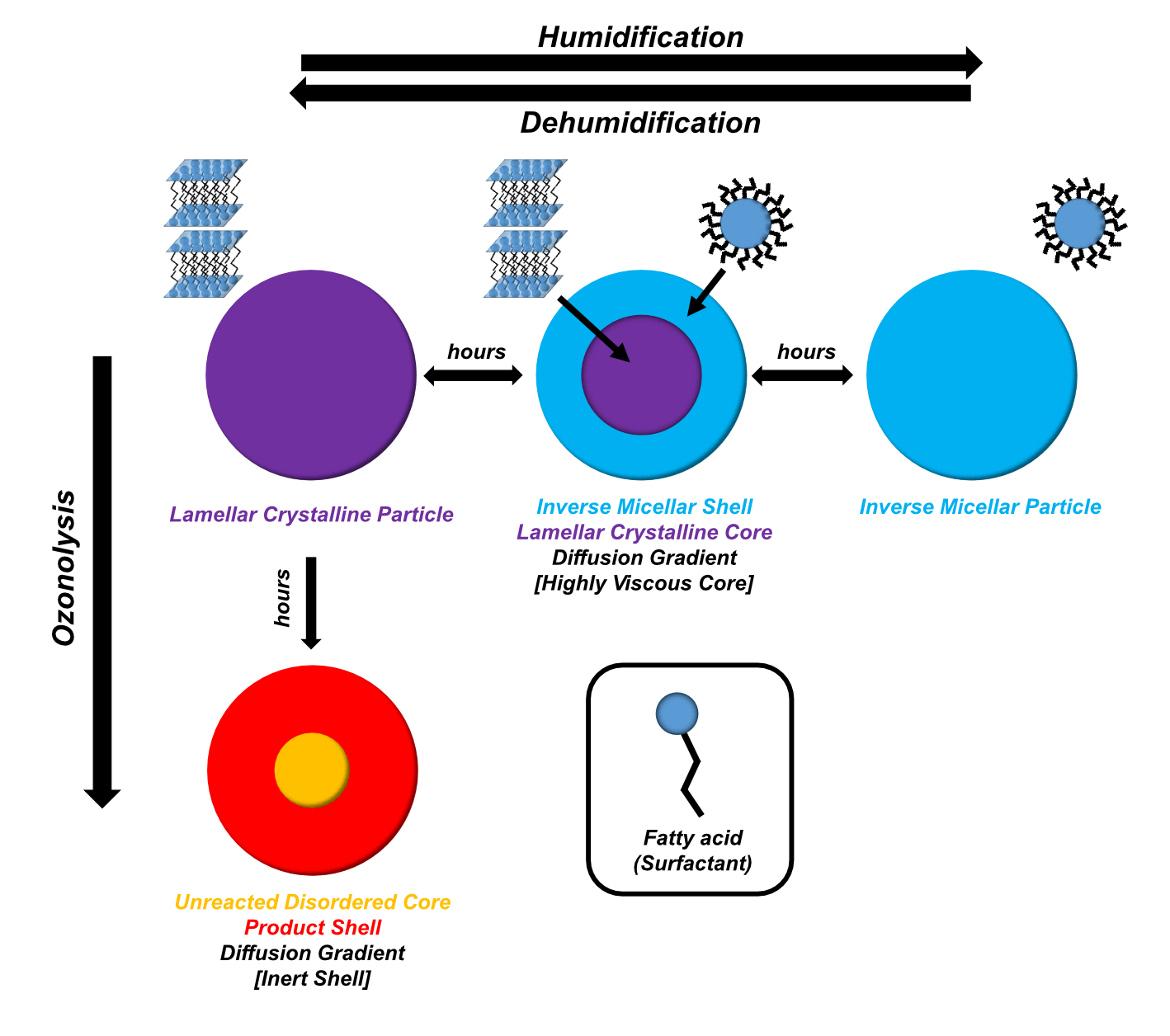 A schematic summarising the findings of this study. Particle humidification-dehumidification and ozonolysis are
represented showing core–shell behaviour. Cartoons of SAXS-observed phases are labelled for clarity. (Atmospheric Chemistry and Physics, DOI:XXX. Reused under the CC BY 4.0 License.)

Studying the shapes and sizes of the very small is what SAXS does best. In this paper it happens to be microscopic pollution particles but SAXS is useful for a wide range of systems including catalysts, bio-materials such as bone and cartilage, as well as everyday consumer products such as detergents and shampoos. In this study, coupling the excellent low divergent microfocus X-ray capabilities of I22 and its flexibility to accommodate a wide range of sample environments allowed us to combine Raman Spectroscopy with X-ray structural studies to give better insights into the overall process taking place.

Previous work: "Researchers have discovered pollution from cooking remains in the atmosphere for longer"