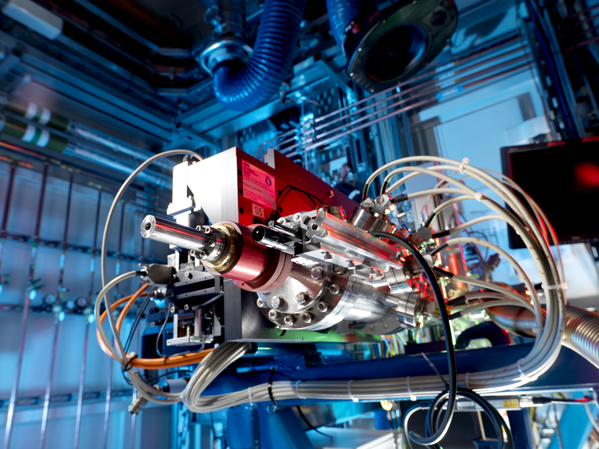 Inside the experimental hutch of the non-crystalline diffraction beamline, I22.

There are many drugs that are not in clinical use because they are either too toxic or too sensitive to use. Such toxicity will cause drugs to indiscriminately damage the body while reaching their target, whereas such sensitivity will cause drugs to be broken down before they can have any effect. One solution to these problems is to put the drugs into protective packages called nanocages. Nanocages can protect a payload as well as having an external surface that can be engineered to make it more biocompatible and easier to target to specific tissues or cell types. Bactoferritin from the bacterium E. coli is a large, football shaped protein composed of 24 identical protein subunits that self-assemble into a hollow structure acting as a naturally derived nanocage. This type of assembled structure can be readily engineered through standard mutagenesis techniques to further refine biocompatibility and stability.

Stability: a double-edged sword in nanocages

Functionally, nanocages must be stable to the variety of harsh conditions inside the body while being able to preferentially disassemble at the site of requirement.  This specific, selective drug release requires a modulated stability of the nanocage for loading, transporting and unloading the medicinal cargo. Highly stable nanocages often require harsh chemical or physical treatments in order to break them down, which could damage both the ability of the nanocage to self-assemble and the sensitive payloads that they are designed to protect. Instead of using harsh chemical treatments, researchers tested whether hydrostatic pressure could be used to control the assembly of bactoferritin nanocages.

The research team used I22 and B21, Diamond’s beamlines for Small Angle Scattering (SAXS) & Diffraction and Solution State SAXS respectively, and observed the protein nanocages at different hydrostatic pressures. On I22, experiments showed that as the pressure increased, the nanocages lost volume and were destabilised, indicating that hydrostatic pressure alone was enough to disassemble the nanocages into smaller parts. The researchers investigated whether such a destabilisation could be reversed. Under suitable, chemically inert solution conditions, the nanocages could be reformed within 30 minutes. The ability to reform intact nanocages was further confirmed by using circular dichroism measurements at beamline B23 at Diamond. The researchers found that a heme-cofactor made the bactoferrin nanocages more stable, suggesting that it could enable the retention of the protein superstructure for iron mineralisation.

The discovery is important for the future of nanocage production and synthesis. Hydrostatic pressure was shown to be a very effective yet gentle way of controlling nanocage assembly. While the experiments were done on ferritin, the researchers concluded that hydrostatic pressure could be applied on many other, highly stable nanocage systems. This could pave the way to develop new nanocage systems without the need of harsh chemical treatments to control nanocage assembly and dismantling. With hydrostatic pressure, the nanocage assembly can be conveniently controlled by increasing or decreasing the pressure accordingly. This could be a new method for creating nanocages with much higher load volumes than are currently prepared. The next stage in this work is to fully investigate methods for loading nanocages using hydrostatic pressure, as well as ensuring that release efficiencies are as high as possible. Hopefully in the future, this technology will be used to help create safe and effective drug delivery systems that can accurately target specific parts of the body such as infection sites or tumors.

This paper is a very good example of how the use of the I22, B21 and B23 beamlines of Diamond’s Soft Condensed Matter Village resulted in a comprehensive and inclusive characterisation of the proteins nanocage structural behaviour that might encourage other beamline users to adopt it in their protein research projects.  These characterisations are complex and require the use of many techniques, each highlighting distinct aspects of the system investigated.

Find out more about Diamond’s Soft Condensed Matter beamlines, including B21, I22 and B23.