Lung and bladder cancers are characterised by the early development of drug resistance and metastasis and remain largely incurable. We urgently need to develop new therapies to treat these smoking-related diseases, and a better understanding of their molecular mechanisms would be a big step forward. A long-term, international research collaboration has discovered that the p90 Ribosomal Protein S6 kinase RSK4 promotes drug resistance and metastasis in lung and bladder cancer cells. Work recently published in Science translational medicine shows that the human enzyme RSK4 has a different activation mechanism to other RSKs and that inhibition of this kinase shows therapeutic potential. The study included a drug screen that identified certain floxacin antibiotics as RSK4 inhibitors, suggesting that existing drugs could be trialled to determine whether they improve patient outcomes and that they offer good leads for new drug development.

Exploring the role RSK4 plays in lung and bladder cancer

The four p90 ribosomal S6 kinases (RSKs) are a unique protein kinase family. These molecular machines are part of a tightly controlled signalling network that allows information to travel from the outside of a cell to the nucleus, ensuring cells can adapt to the environment. Disruption to this communication leads to changes in the cells, which lose control over cellular processes, and can cause cancer and other diseases.

RSK proteins are involved in multiple processes, including protein translation, cell growth, and migration. Although inhibiting their function may help control cancer, a pan-RSK inhibitor is likely to have considerable side effects, and many not ultimately result in improved patient outcomes. RSK1 and RSK2 are the most studied, and researchers believed that the four RSKs would be very similar in terms of biological function. As a result, there have been few studies of RSK4, and this protein was poorly understood. Indeed, previous studies have produced conflicting results, and the role RKS plays in cancer progression is controversial. It's possible that RSK4 can act as a tumour suppressor or a tumour promoter, depending on the context or the type of cancer.

Now, a long-term, international collaboration has investigated the role RSK4 plays in the progression of lung and bladder cancer. Their results show that - unlike RSK1-3, RSK4 promotes chemoresistance and metastasis in lung and bladder cancer cells. Furthermore, in vitro and in vivo tests show that disabling the protein via genetic manipulation increases the sensitivity of these cancer cells to chemotherapy and prevents metastasis.

These initial results prompted the team to explore whether RSK4 can be targeted as a novel therapeutic approach to managing these cancers. They searched for small molecules that specifically and selectively block RSK4. Screening existing drugs identified several floxacin antibiotics, particularly trovafloxacin, as potent RSK4 activation inhibitors. 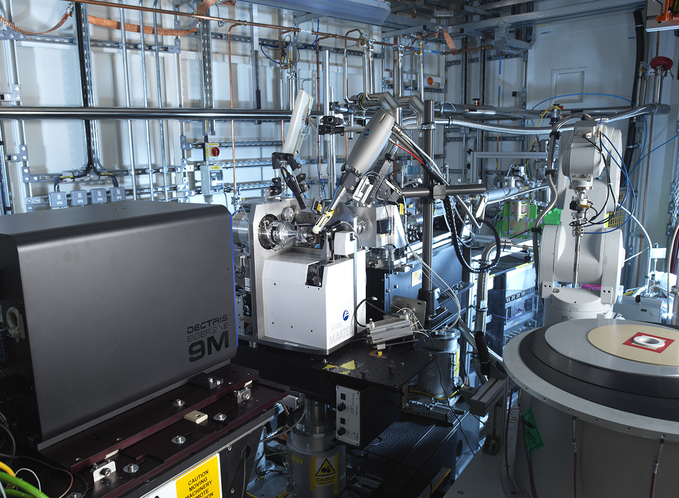 Experimental hutch in beamline I04-1

In order to fully understand the regulation mechanism of RSK4 and how floxacin antibiotics interfere with protein activation, the team crystallised the catalytic domains of RSK4. Using macromolecular crystallography (MX) at Diamond (on beamlines I03, I04-1 and I24), they revealed key differences in the structure of RSK4.

The most striking feature of the RSK4 structure is the presence of a β-sheet (called βB-sheet) that occupies the position of the C-helix, present in classical protein kinase topology. Importantly, this unique structural feature was also present in the structures of the active phosphorylated protein (PDB ID 6G76) and the constitutively active S232E mutant (PDB ID 6G78), confirming that the βB-sheet plays a crucial role in RSK4 regulation and activation.

Dr Filippo Prischi, Senior Lecturer in Biochemistry at the University of Essex, is leading the structural side of the project. He says:

The work carried out at Diamond has been crucial not only for data collection, but also for data processing. For example, the crystals of phosphorylated RSK4 and mutant RSK4 were twinned, complicating the data analysis. The automatic data processing pipeline at Diamond helped us identify the issue, allowing for optimisation to get around this problem.

Another feature in all three structures is an allosteric site vital for protein activation. This site is free and accessible when the protein is inactive but is bound to the RSK4 AGC-kinase regulatory domain in the active state. Deuterium exchange analyses confirmed that floxacin antibiotics bind in this pocket.

After an unsuccessful attempt to crystallise RSK4 in complex with trovafloxacin, the team used a computational approach to interrogate the three structures solved at Diamond. Using a combination of molecular docking simulations and Markov Transient Analysis, they proposed a novel protein activation mechanism, different from that of the other members of the RSK family. Their results revealed that the binding of floxacins on the RSK4 allosteric site locks the protein in an inactive state and prevents the binding of the RSK4 regulatory domain.

In an additional step, the team found and re-analysed a cancer patient trial involving the prophylactic use of the levofloxacin antibiotic. In this large placebo-controlled clinical trial, patients receiving levofloxacin as part of their treatment regimen showed increased long-term overall survival times. Taken together, these results suggest that targeting RSK4 with floxacin antibiotics may represent an effective therapeutic strategy for treating lung and bladder cancer.

It may also be possible to develop new floxacin-based drugs that inhibit RSK4 but do not have an antibiotic function. This is potentially advantageous as the long-term use of antibiotics can lead to the development of antibiotic-resistant bacteria.

Dr Prischi is leading research to increase our detailed understanding of RSK4, while other members of the research team are investigating how best to use these results to develop effective lung and bladder cancer treatments.

Click here to learn more about Macromolecular Crystallography (MX) at Diamond and our MX beamlines.