Find out about upcoming events and webinars, and watch past events.

You can also explore Diamond by using our interactive map and discover the synchrotron, beamlines and much more.

Scientists from the Chinese Academy of Sciences, ShanghaiTech University, Songshan Lake Materials Laboratory, KAUST, the MPI-IS in Stuttgart, Diamond, and University of Oxford report in a recent issue of Physical Review Letters on their discovery of monopolonium, a topological defect that can be regarded as a superposition of an emergent magnetic monopole and an antimonopole. After initial hints from magnetic electron microscopy, the combined power of synchrotron-based scanning transmission X-ray microscopy (STXM) and resonant elastic X-ray scattering (REXS) provides crystal-clear proof for the existence of these complex 3D singularities in ferrimagnetic CoTb thin films.

Recent advances in physics have been largely promoted by cross-fertilisation between high-energy (e.g., particle physics) and low-energy systems (e.g., condensed matter physics). One of the key advantages of condensed matter physics in this interplay is that the quasiparticles associated with many phenomena have a high chance of being excitable in the comfort of a university lab. In this way, fundamental physics principles can be studied as emergent phenomena in solid state systems, on its turn feeding back into high-energy physics. 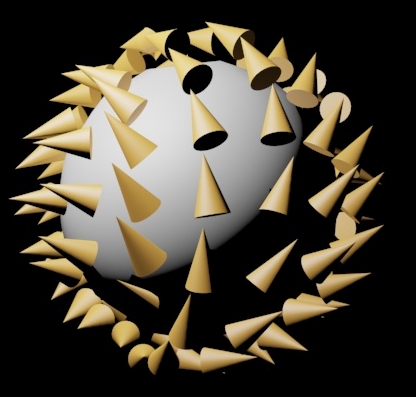 Illustration of the superposition of emergent monopole and antimonopole.

Inspired by this approach, the team aimed at creating novel topological quasiparticles in magnetic materials, which may provide insight into monopole science. The magnetic monopole and antimonopole are two elementary particles that, when connected by a one-dimensional Dirac string, essentially form a dipole. A fascinating approach to understand the origin of magnetism is to envisage a magnetic singular point without a Dirac string, in which the flux lines from a monopole and an antimonopole superimpose in space. Although the collision of a monopole-antimonopole pair usually results in their annihilation, they may also form the monopolonium bound state, which remained elusive in a magnetic system. In their work, the team proposed an emergent model that elegantly resembles such a flux-line configuration through the nucleation of a singular point within a three-dimensional magnetisation texture, which is composed of two oppositely aligned sublattices. Such a combination of topologically charge-neutral singularities can be realised in ferrimagnetic CoTb thin films.

When carrying out Lorentz transmission electron microscopy (LTEM), one of the most common and successful magnetic microscopy techniques, one soon realises that its depth-averaging nature sets hard limits to the exploration of exotic 3D objects. This is where X-rays come to the rescue. By using resonant elastic X-ray scattering (REXS), especially in combination with circular dichroism, a slicing of the magnetic contrast of the near-surface layers of the sample can be achieved, from which the 3D characteristic of singularities can be reconstructed. 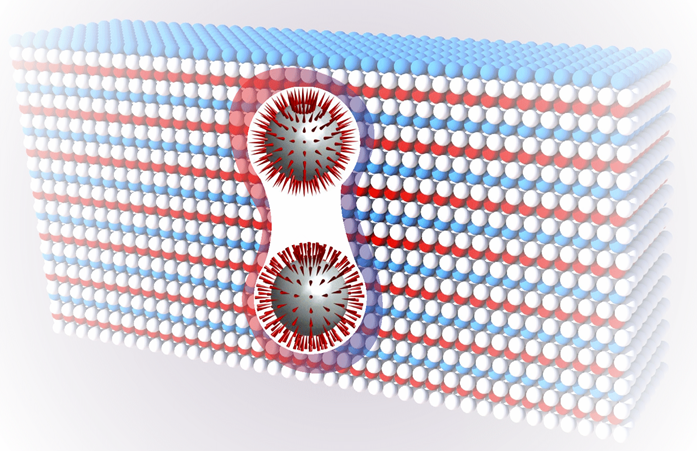 Two oppositely aligned emergent monopoles in a continuous CoTb thin film have been identified by complementary techniques of resonant elastic x-ray scattering, Lorentz transmission electron microscopy, and scanning transmission x-ray microscopy. This new type of topological defect can be regarded as a superposition of an emergent magnetic monopole and an antimonopole, around which the source and drain of the magnetic flux overlap in space. Such a quasiparticle provides an excellent platform for studying the rich physics of emergent electromagnetism.

Corresponding author Prof Shilei Zhang explains his excitement: “The monopole-antimonopole superposition structure may provide an inspiration for understanding the fundamental electromagnetic force. From an emergent electromagnetism point of view, there are great merits in exploring the consecutive magneto-electrical effects and dynamics during the phase transitions.” And Prof Zhang continues: “This work also underscores the unique role in magnetic characterisation played by soft X-ray scattering, and we are looking forward to more of its applications in solving important scientific questions.”

To find out more about the I10 beamline, or to discuss potential applications, please contact Principal Beamline Scientist Paul Steadman: paul.steadman@diamond.ac.uk.