Diamond’s X-rays measure the mass of the human chromosome

Karl Wilhelm von Nägeli first observed chromosomes in plant cells in 1842, and Walther Flemming described their behaviour in animal cells in 1882. In the early 1990s, the Human Genome Project (HGP), the world's largest collaborative biological project, determined the base pairs that make up human DNA and identified and mapped all of the genes of the human genome from both a physical and a functional standpoint. The HGP told us the mass of human DNA, but it has not been possible to precisely measure the masses of the chromosomes it includes until now. In work published in Chromosome Research, researchers from University College London (UCL) used X-ray ptychography at Diamond to determine the number of electrons in a spread of 46 chromosomes and used that to determine the mass of the chromosomes. This novel technique can be used to determine the total genome mass of a species, including DNA and the related chromosomal proteins present at the different stages of the cell cycle, without invasive staining. 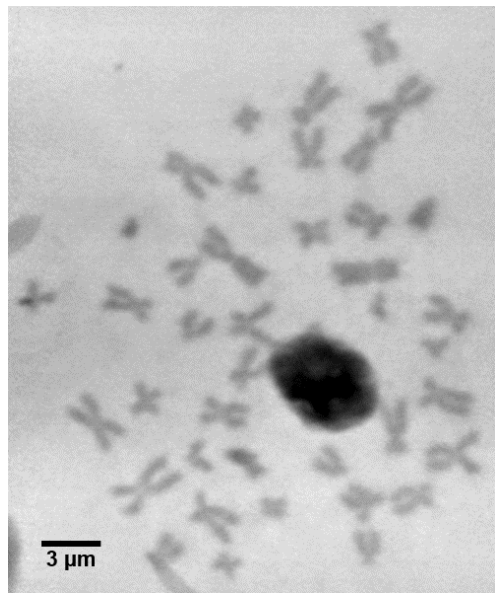 Spread of unstained chromosomes as revealed from a ptychographic phase image.

Chromosomes are home to our DNA, but they also contain proteins with functions ranging from reading the DNA and regulating cell division to tightly packing two-metre strands of DNA into our cells. Although scientists have been studying chromosomes for over a century, they are complex structures we do not yet fully understand.

Prof Ian Robinson from the London Centre for Nanotechnology at UCL is conducting a long-running project investigating the use of X-rays to study the structure of the human chromosome. Unstained human chromosomes are a low contrast sample, making them difficult to image with X-rays. However, the situation changes when making full use of the wave properties of light. The wave property is expressed in terms of coherence, for example a laser is a fully coherent light source. Third-generation synchrotron radiation sources such as Diamond produce highly coherent X-ray beams. These X-ray beams allow researchers to probe both the amplitude and the delay of light waves as they pass through the sample. The delay or phase observed is directly related to the electron density of the material.

In Coherent Diffractive Imaging (CDI), a coherent X-ray beam illuminates a sample and retrieves the phase information from phase-retrieval analysis of the far-field diffraction pattern. Ptychography is a variant of CDI that uses a scanning technique where diffraction information is collected from overlapping regions and used to reconstruct the sample phase properties. Combining the high penetration power of hard X-rays and the sensitivity of CDI gives ptychographic imaging the capability for nanometre-scale resolution of 3D structures with a high sensitivity to electron density changes.

Ptychographic imaging results in a pair of images. The amplitude measures the extent of X-ray absorption by the sample, and the phase measures the delay introduced to the beam due to refraction as it passes through the sample.

Darren Batey, a beamline scientist on the I13 beamline, explains:

The particular benefit of ptychography in this case is that it provides quantitative phase information, alongside the absorption term, directly. In this research, the UCL team used known relationships between that phase information and the electron density of materials in a first attempt to 'weigh' the chromosomes.

A karyotype is a snapshot of an organism's chromosomes, arranged according to size and shape. Karyotyping is the first stage of identifying genetic anomalies and aberrations and can be used for diagnosing genetic diseases. In this research, the team produced X-ray karyotypes of both stained and unstained samples to determine the change in genetic mass due to low-level radiation damage.

The high-quality images produced from the synchrotron, coupled with the expert analysis of the academic team, has opened up a new pathway to better understand the human chromosome by indirectly measuring their mass with X-rays. The results suggest that the mass of the chromosomes actually increase slightly during low dose irradiation, which may be an adaptive response. While these results are intriguing, the true value of this research lies in the development of a new and improved technique to image and weigh individual chromosomes, which will greatly benefit medical labs diagnosing cancer in patient samples.

To find out more about the I13 beamline or discuss potential applications, please contact Principal Beamline Scientist Christoph Rau: christoph.rau@diamond.ac.uk.