A new dimension to electronic devices

Electrons possess many different properties, but the one that is most commonly used is charge. The negative charge of an electron is the reason that we have lights, computers, and cellphones—it is the heart of all electronics. But what if it was possible to use the other properties of electrons as well as charge? For example, electrons have a property known as spin which could carry information along with the electrical charge. This is why spin is being explored as a way to add an extra degree of freedom to how we use electrons, which has implications for data storage and may be crucial for quantum computers.

How is bistability related to spin? 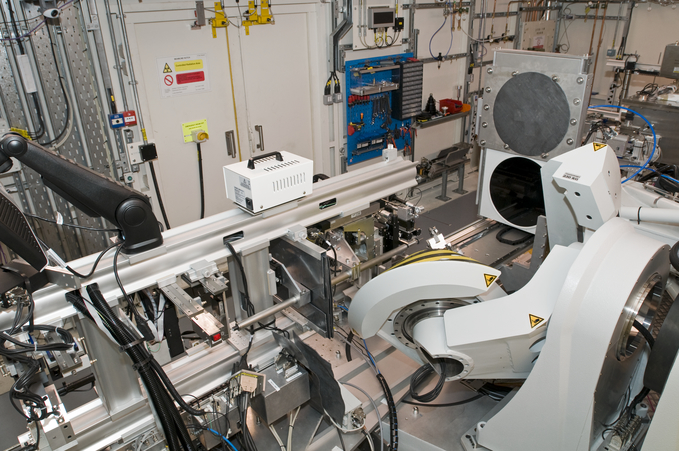 I15 beamline at Diamond

Bistability is a property meaning something that can be stable in two different states. Just like a light switch is stable in the off and on position, bistable materials can exist in two different and stable states. In a similar way to a light switch, many bistable materials can be flipped between the two different states, effectively making them switches. Modern electronic devices are built up of tiny switches which are stacked onto every circuit board. One of the main aims of this area of research is to find new switches that can make modern electronics smaller, faster and more powerful.

There are several recurring challenges with research into spin crossover. For example, it is often possible to change the spin state of a material at temperatures and pressures that are not usable in most everyday electronics. It is also often very difficult to uncouple the effect of charge and spin. This is because when spin crossover occurs, it is often accompanied by a change in the charge known as metal charge transfer. To date, there are very few materials that have exhibited spin crossover without metal charge transfer.

A pan-European team of researchers set out to characterise the Prussian blue analogue FePt(CN)6. This is an elusive class of material that displays spin crossover without metal charge transfer. Using Diamond’s Extreme Conditions beamline (I15), the research team discovered that spin crossover could be induced in this Prussian blue analogue by subjecting it to either X-ray irradiation or moderate pressure. While X-ray irradiation may have limited practical applications, the discovery that only moderate pressure can produce spin crossover means that this could be used in less extreme circumstances.

This study highlights the benefits of studying Prussian blue analogues which are an interesting group of chemically similar materials with strikingly different properties. The properties of these analogues are also tunable, making them useful in a range of different applications. In the future, it is hoped that more research will be done into the spin crossover transitions in Prussian blue analogues, which should uncover more materials that can transition their spin state under ambient conditions. This would make their use in electronic devices more likely.