A decade of Sleeping Sickness research at Diamond 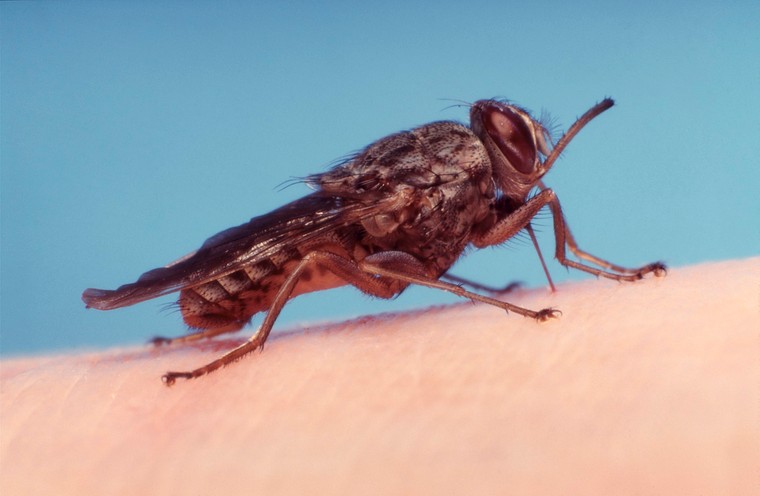 African Trypanosomiasis, more commonly known as “sleeping sickness”, is caused by the microscopic parasite Trypanosoma brucei (T. brucei). The parasites are transmitted to humans by a bite from the tsetse fly, which is only found in sub-Saharan Africa. Diagnosis of the disease in the early stages is difficult because although symptoms can be severe, they are non-specific. The only sure way to diagnose sleeping sickness is by taking a blood sample and visually identifying the parasite. Sleeping sickness is treatable if diagnosed, however if left untreated, symptoms such as fever, fatigue and aching muscles can become more severe eventually culminating in a nervous system infection that will result in death.

Over the years, a lot of research has been done at Diamond on T. brucei. The work revolved mainly around protein crystallography where researchers would study individual proteins from T. brucei in order to understand the parasite lifecycle and the infection process. To date, 46 T. brucei protein structures solved at Diamond have been deposited in the publicly accessible Protein Data Bank. By understanding how essential proteins from the parasite work, it is then possible to find a treatment for the disease by finding small molecules that block the protein’s function. This article outlines just some of the research into T. brucei carried out at the UK’s synchrotron over the last decade.

An early example of work on T. brucei at Diamond is from 2012, when Hemsworth et al.1 studied a protein called a GTPase which is essential for the motility of T. brucei. Without the ability to move, the parasite would not be able to cause infection. While human cells also contain GTPase enzymes, the research team discovered that there were key differences between human and parasite enzymes. This important discovery meant that they could be targeted for treatment with a lower risk of negative side-effects on the human body.

A year later in 2013, Canning et al.2 studied a protein called Oligopeptidase B. This protein is not found at all in humans but frequently found in bacteria and parasites, including T. brucei. The group produced a very high-resolution structure of the protein with and without an inhibitor bound that was shown to kill the T. brucei parasite. This important work showed how new inhibitors could be developed using computational methods based on their high-resolution structural data. A second study in 2013 by Timm et al.3 produced high resolution structures of the adenosine kinase from T. brucei. This protein is a cornerstone of a biochemical pathway that exists in some parasites but not in humans making it a perfect drug target.

There were a further three structures solved at Diamond in 2018. Blaazer et al.4 solved the structure of a protein called Phosphodiesterase B1 which, when it is blocked, can clear parasites from the bloodstream. The team also described a method for designing new drugs to target this protein which has become an important strategy to help manage the disease. Another study in 2018 by Harrison et al.5 also described a method for designing new drugs to treat sleeping sickness. They noted that to date, many treatments required such high doses that they had toxic side-effects. They use crystallography to solve the structure of the N-myristoyltransferase and identified inhibitors with 1000-fold greater selectivity for the T. brucei variant of the protein which reduces the concentration needed for it to be effective. A third study published in 2018 shed light on how T. brucei evades the immune system to cause disease. Normally, parasites are killed because the immune system produces proteins that can punch holes in the parasite. However, T. brucei produces proteins that can block the immune system. Zoll et al.6 investigated the role of these parasitic proteins and solved the structures, revealing important information that will lead to the development of drugs to help the immune system fight back.

The most recent study was published in 2021 by Zeelen et al.7 .They studied the troubling finding that some T. brucei strains are becoming resistant to one of the main treatments, suramin. This comes at a crucial time when sleeping sickness cases have fallen dramatically in recent years thanks to screening and treatment efforts. Resistant subpopulations of the parasite could risk a sharp increase in infections and deaths. The research team solved the structure of a variant glycoprotein (VSG) which have not been studied in detail and were thought to only be responsible for antigenic variation. The study reported that a specific VSG called VSGsur can bind the drug suramin on the surface and prevent it from being active. This important finding suggests a lot more work needs to be done characterising the structure of surface proteins on T. brucei.

Continued effort studying neglected tropical diseases like sleeping sickness is important. Even as work to reduce the spread of the disease starts taking effect, mutations in the parasite bring about resistance to treatments which then have to be revised. The work carried out at Diamond revolves around understanding the molecular components of the virus so that new drugs can be designed and that mechanisms of resistance can be quickly understood.