Proterocladus from the Svanbergfjellet Formation, Svalbard (filament width is ~15 µm). An important green algal fossil that was recently confirmed as the oldest fossil seaweed.

A UK-US collaboration has shed light on the preservation of ancient microfossils. As outlined in Interface Focus, the presence of kaolinite haloes surrounding the tiny fossils is believed to have kept destructive bacteria at bay, stopping decay. The small molecular differences of the clay around the fossils called for the Synchrotron IR microbeam.

Fossils that are over 500 million years old are extremely rare because early organisms were microscopic, only the thickness of a hair, and lacked hard parts that can resist decay. To understand how these early organisms could be preserved, IR microspectroscopy was performed using the Multimode InfraRed Imaging and Microspectroscopy (MIRIAM) beamline at Diamond Light Source. IR microanalysis allowed researchers to identify at the micron scale the minerals surrounding 800–1,000 million-year-old microfossils, and it was determined that an aluminium-rich clay known as kaolinite was responsible for their preservation. Kaolinite was previously shown to be toxic to bacteria, so its presence prevented the early organisms from being destroyed.

These observations suggest that the early fossil record might be biased to regions that are rich in kaolinite, such as the tropics. Moreover, the lack of animal fossils in these samples, despite having favourable fossilisation conditions demonstrates that animals were yet to evolve 800 million years ago.

Our understanding of life on Earth millions of years ago derives largely from our knowledge of fossils. However, most fossils that have been discovered are from only the last ~10% of Earth’s history, which is just 500 million years. Animals 500 million years ago evolved to possess hard shells or skeletons that could resist decay and allow them to become part of the fossil record. But what about microscopic organisms from much earlier time points that were made of only soft parts?

A collaboration between University of Oxford, Harvard University, Massachusetts Institute of Technology, Yale University and Diamond Light Source set out to investigate how these microfossils could be preserved.

Lead author of the study and Post-Doctoral Research Fellow at the University of Oxford, Dr Ross Anderson, explained their motivations,

We want to know what the conditions are that are conducive to preservation because then we can more easily find these elusive fossils. It will also help us to understand how this early fossil record is biased towards certain environments or time periods that are more favourable to preservation. 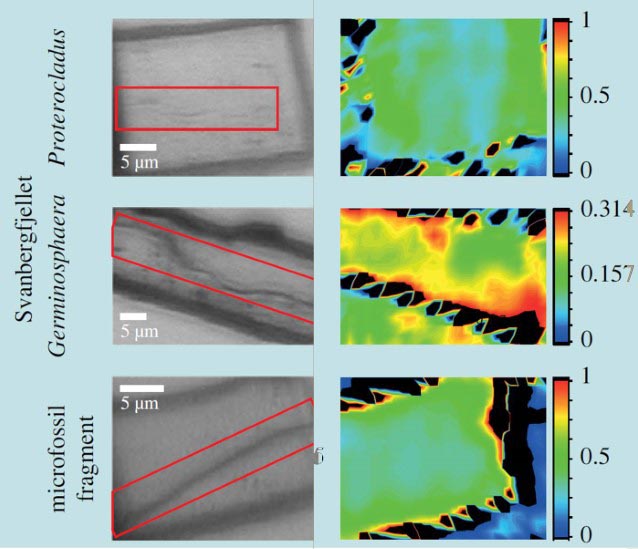 Light microscopy images (left) indicating the position of the microfossils (red boxes) and Synchrotron-based IR maps (right) showing the compositional variation of the clay around the fossil (as ratio of 3694 cm^-1 band vs the M-OH region). Data taken at MIRIAM beamline B22 at Diamond.

The fossils from these time periods are microscopic, not visible to the eye, and are compressed into two dimensions parallel to the layers of rock.

To find them we have to cut a very thin layer of rock about 30 µm in thickness parallel to the layers of sediment, from which the fossil is visible under a microscope. Once we've found the fossil, we prepare it for mineralogical analysis by using an ion beam to cut a vertical slice of the fossil that is only 1 µm thick. 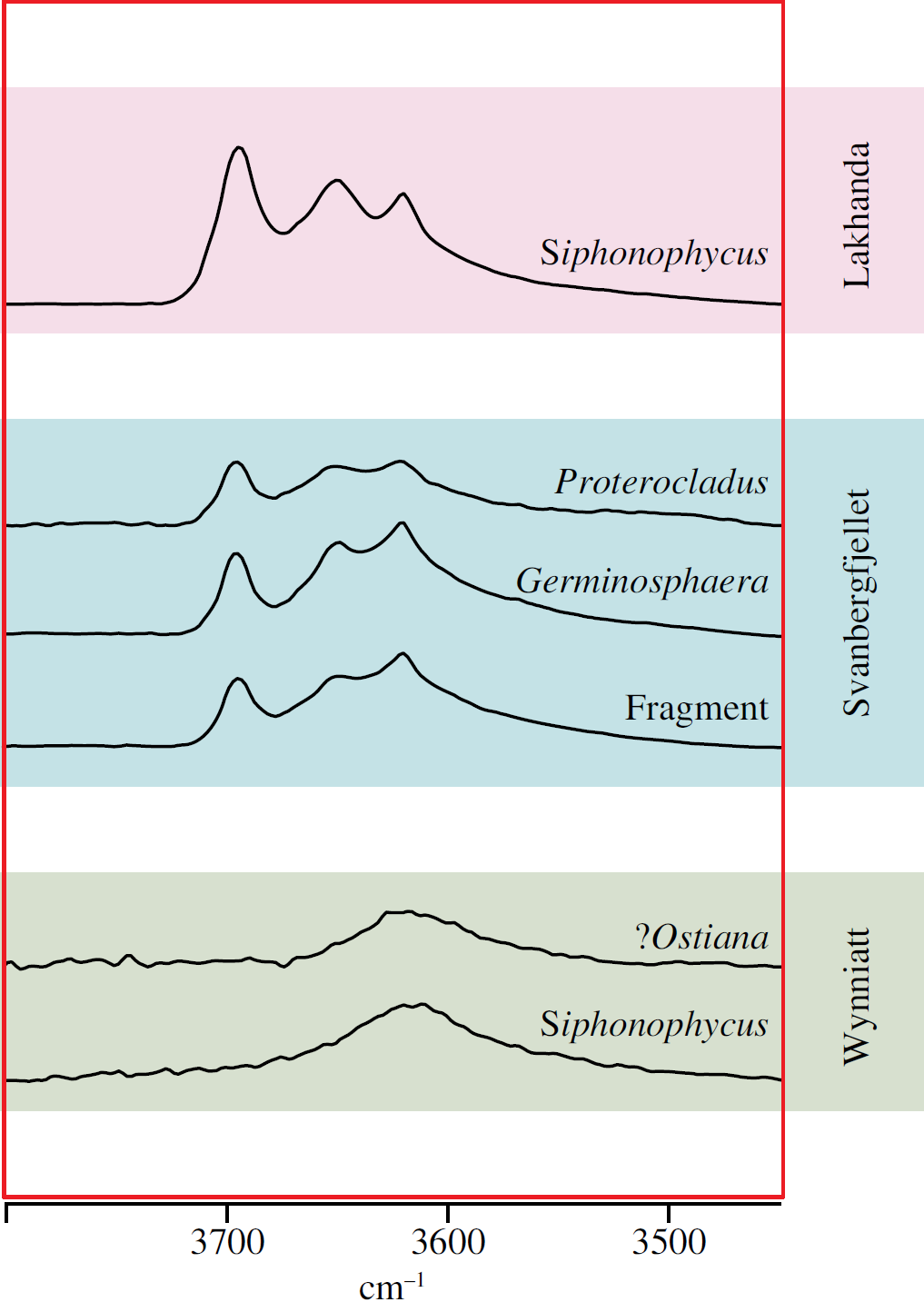 The thin sections of rock were prepared at Oxford and Harvard and analysed at Diamond for mineralogical microcomposition. Dr Anderson and his team were interested in the composition of the rock around the fossils to understand why they had been preserved. To explore the mineralogy of the rock at the micron scale around the fossil and to obtain enough signal to detect the clay changes,  both the spatial resolution and the sensitivity allowed by the IR microscope at the MIRIAM beamline at B22 were needed. Synchrotron IR microanalysis was the optimum method to experimentally prove the difference in types of minerals around the preserved microfossils.

Recent studies by Anderson and colleagues had identified that a clay mineral called kaolinite, which is rich in aluminium, is toxic to the types of bacteria responsible for the decay of marine organisms. Intriguingly, IR microspectroscopy showed that the microfossils were also coated in the same kaolinite, which resembled a preservative halo.

It would suggest that the early fossil record is biased to environments where kaolinite is likely to be common - typically tropical environments. Interestingly, all the fossils studied come from rocks that were formed in the tropics. 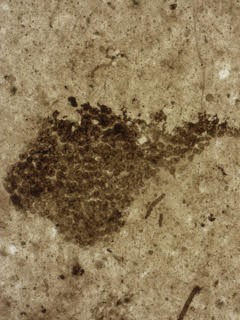 Ostiana from the Wynniatt Formation, Canada; either a colony of a cyanobacterium or another green alga (an individual cell is ~12 µm).

Importantly, the lack of animal fossils in the 800 million-year-old rocks, despite having favourable preservation conditions, strongly indicates that animals had not evolved at this time point.

Another important implication of the protective kaolinite haloes is in the discovery of fossils on other planets. Having a rich understanding of how microscopic life can be fossilised is key to finding proof of life on other planets. In fact, NASA plan to send a rover to Mars in July 2020 to collect rock and soil samples to uncover signs of possible life. It is believed its Martian landing site, the Jezero Crater, could have kaolinite, which would hopefully improve the chances of finding intact microfossils.

In the future, Dr Anderson and the rest of the team intend to study microfossils from other deposits of different time periods. He concluded:

The method we have developed really enhances the tools with which palaeontologists can characterise the composition of exceptionally preserved fossils and their surrounding rock. It will be applicable to a wide range of questions across the geological record.