Isn’t it exciting? RIXS has a new trick up its sleeve

Continuous improvements in brilliance and energy resolution have established resonant inelastic X-ray scattering (RIXS) as a tool to unravel local or collective magnetic excitations. Various techniques can be used to observe spin-flip excitations involving two magnetic sites. However, the RIXS process is uniquely able to probe double spin-flip excitations at a single magnetic site, due to the many-body physics inherent to the RIXS process. In work recently published in Physical Review Letters, researchers from Diamond's I21 beamline present the first experimental verification of this technique, offering the potential to delve more deeply into these less understood, second order excitation processes.

Nickel oxide (NiO) is a well-studied material, and its ground state is known. However, it is one of a number of materials in which two spins exist on single atoms, which makes it more challenging to identify the origin of double spin-flip excitations.

One of the key techniques used for exploring magnetic effects is inelastic neutron scattering (INS). However, INS is limited to probing first order excitations (magnons). Raman scattering is usually sensitive to second order magnetic effects that result from two magnetic sites, generally known as bimagnon. However, there is another type of second order magnetic excitations in which two spins flip on the same atom (double magnon). To distinguish the origin of these second order excitations, researchers would need to carry out measurements that can differentiate bimagnon and double magnons.

Fig 1. (a): RIXS spectrometer at I21. (b) Comparison of RIXS signal from a real sample (Bi2201) with and without the collecting mirror.

When we excite a material, there's an immediate reaction. This first order response is strong; it's easy to probe and easy to understand. But there are other effects, second order effects, that aren't always directly visible. RIXS has been shown to directly probe these higher order processes, and that's what we wanted to explore 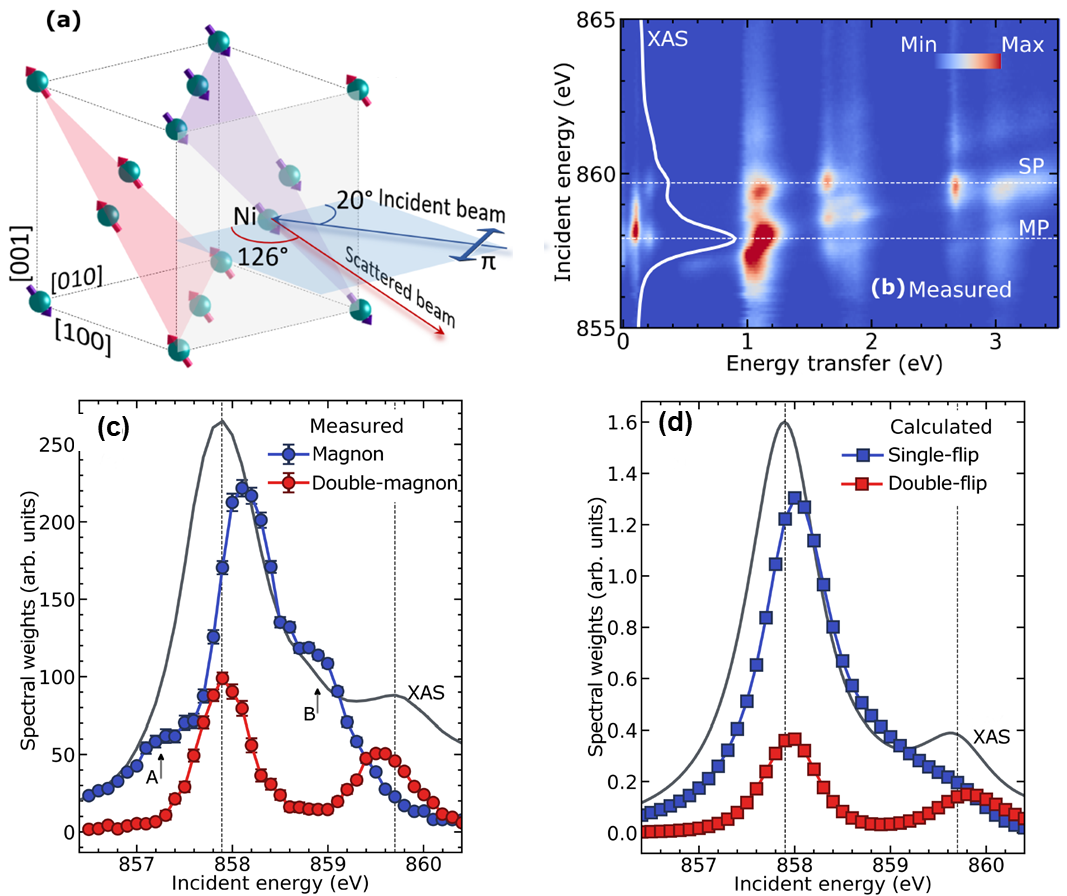 Fig 2. (a): RIXS scattering geometry used for the experiment. (b) RIXS incident energy map collected at I21 on NiO. (c) Resonance behavior of experimentally measured magnon and double-magnon excitations represented by their spectral weights. In panel (d) the spectral weights obtained from simulated RIXS spectra of single-site single and double spin-flip excitations using Quanty are shown.

Resonant Inelastic X-ray Scattering (RIXS) is a relatively new, but powerful, technique. It's sensitive to lots of excitations, and the results it provides are rich. Momentum dispersion measurements can potentially distinguish between the two excitations. However, they can't easily be carried out in a standard RIXS setup, so researchers need another way to determine whether what they're seeing are bimagnons or double magnons. And that's what Dr Nag and the team have demonstrated in this research.

Although magnetic effects are weak (and second order magnetic effects are even weaker), the I21 beamline is equipped with two collecting mirrors that increase efficiency by an order of magnitude (Fig. 1). This makes it possible to probe subtle effects, and a single decent RIXS spectrum can be collected in just three minutes.

For this research, the team combined RIXS with X-ray absorption spectroscopy (XAS). They changed the incident energy and collected RIXS measurements across the XAS spectrum (Fig. 2 (b)). Although this involves taking a lot of measurements, I21 is fully automated (using very precise motors).

They analysed their data using the Quanty code developed by Maurits W. Haverkort. They compared the spectrum it produced with a single atom model and were able to show that the resonant behaviour of double magnons is very different from that of bimagnons (Fig. 2 (c,d)). They have demonstrated that this technique can be used to understand the origins of second order excitations.

RIXS offers a new way to facilitate our fundamental understanding of materials, beyond what can be learned with techniques such as INS and Raman scattering. We are planning to apply this technique to more magnetic materials, and to continue to improve the resolution of the I21 beamline for studying finer structures of many exotic excitations.

To find out more about the I21 beamline, or to discuss potential applications, please contact Principal Beamline Scientist Kejin Zhou: kejin.zhou@diamond.ac.uk.