While some volcanoes are prone to explosive eruptions, others are more sedate in nature. One of the critical factors in determining the type of eruption is the viscosity of the magma, which depends on both the silica content and the volume of crystals (microlites) present. Solid crystals increase the viscosity of the magma, and above a critical volume can lead to explosive eruptions. However, the presence of microlites does not explain the occasional unexpectedly explosive eruptions from normally sedate volcanoes. In work recently published in Science Advances, an international team of researchers has demonstrated the role that much smaller crystals - nanolites - play in these anomalous explosions. Understanding the factors at play in these unusual eruptions will improve our ability to predict them and mitigate their damaging effects on local populations.

In 79 AD, an extremely violent eruption of the volcano Mount Vesuvius destroyed the Roman cities of Pompeii and Herculaneum. Pliny the Younger described the eruption in a letter, leading to similar eruptions being described as Plinian.

The relatively minor eruption of Eyjafjallajökull in 2010 led to enormous disruption to air travel across western and northern Europe for nearly a week. The most powerful volcanic eruption in human history - that of Mount Tambora in 1815 - caused a global climate anomaly. An average drop in global temperature of between 1.5° and 2°C resulted in "the year without a summer" in 1816. There is a 10-50% chance of an eruption even more violent than Tambora occurring in the 21st century, potentially releasing twice the volume of ash.

Bulk magma viscosity is one of the critical factors in determining the size of an eruption. Magma is a liquid silicate melt containing dissolved gases (mainly water, carbon dioxide, and sulphur) and variable amounts of crystals. When the viscosity is low, the gas bubbles in the magma can escape before the magma reaches the surface, averting an explosion. The presence of microlite crystals (typically 1 to >100 mm) increases viscosity, and when they reach a critical volume (above 30%), this can lead to explosive eruptions in silica-rich magma.

In contrast, basaltic volcanoes, such as Mount Etna, generally produce low-silica, low-viscosity magma. As a result, their eruptions are less destructive. However, they can break from their typical pattern and produce an unexpectedly violent eruption. The presence of microlites does not always explain this behaviour. 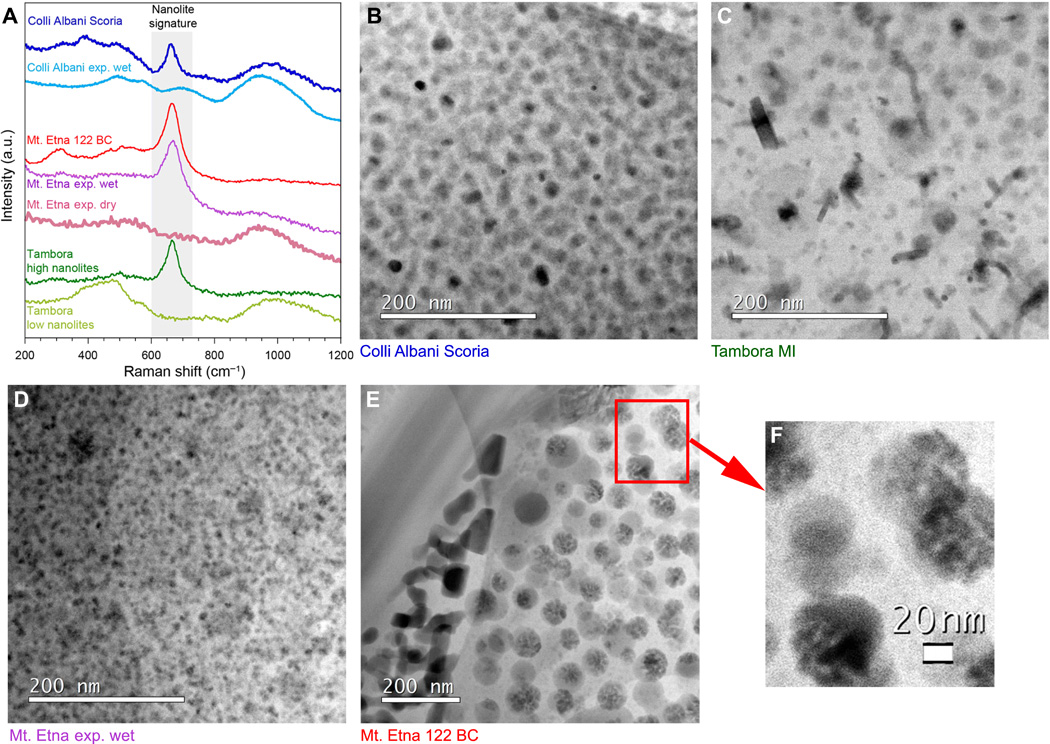 Nanolites in natural and experimental samples.
The Raman spectra in (A) represent ~1000-nm areas of the nanolite bearing glass seen in the STEM images (B to E), as well other nanolite-free areas or samples that have been experimentally melted and quenched. The broad silicate bands at ~500 and ~1000 cm−1 are characteristic of nanolite-free glass, while the sharp peak at ~670 cm−1 has been attributed to FeO-bearing nanolites (33). Samples in (B) phonotephrite from Colli Albani, (C) trachy-andesite from Tambora, and (D) a hydrous experimental Mt. Etna basalt sample all contain 4 to 5 volume % of nanolites around 10 to 20 nm in size. In (E), a natural sample collected from the 122 BCE eruption of Mt. Etna shows two sets of nanolites; one solid (on the left adjacent to a plagioclase crystal) while the others appear to be agglomerates, enlarged in (F). The latter are more typical for the 122 BCE eruption. These agglomerates represent 13 to 20 volume % of the imaged samples, although it should be noted that the individual finer 5-nm aggregated particles in (F) (corrected for the intergranular melt) would represent <5 volume %. STEM wafers are ~100-nm thick. a.u., arbitrary units.

Crystalline nanocrystals - nanolites - were first described in magma in the 1980s, but remained largely uninvestigated. Dr Danilo di Genova at the University of Bayreuth wanted to understand their effect on magma viscosity, and studied samples taken from Mount Etna. To do so, he worked closely with scientists from the University of Bristol, the Clausthal University of Technology, ESRF and Diamond Light Source.

Combined with fieldwork and analogue lab experiments, the results show that nanolites can increase magma density for long enough to trap gases, leading to an explosive eruption.

Diamond's beamline staff are helpful and collaborative, enabling us to collect and analyse the data we needed.

Our results provide an eloquent explanation for violent eruptions at volcanoes that are generally well behaved but occasionally present us with a deadly surprise. A better understanding of this process can help to reduce the risks for the population in the vicinity of such volcanoes.

These experiments were carried out at ambient pressure. The next stages for this research are therefore to investigate what happens at the higher pressures that would be found deeper in the Earth's crust, and with the presence of water, which is the most abundant gas in magma.

To find out more about the I15 beamline, or to discuss potential applications, please contact Principal Beamline Scientist Christine Beavers: christine.beavers@diamond.ac.uk.

For I22 beamline, the Principal Beamline Scientist is Nick Terrill: nick.terrill@diamond.ac.uk.