Exploring the science of superconductors

The 1986 discovery of the first high-temperature superconductor was such an amazing breakthrough that it won a Nobel Prize in Physics just a year later. Superconductor research is a vibrant field and has developed many more superconducting materials with ever-higher critical temperatures. However, we have yet to achieve a complete understanding of the fundamental physics underlying superconductivity. Investigations using optical spectroscopy or inelastic neutron scattering have their limitations. With its sensitivity to both charge and lattice, element-specific and high-resolution resonant inelastic X-ray scattering (RIXS) offers a much more complete picture. In research recently published in PNAS, the team on beamline I21 have used state-of-the-art RIXS to study an underdoped superconducting single-layer Bi2Sr1.4La0.6CuO6+δ (Bi2201), and have demonstrated both the multiorbital nature of the charge density waves (CDW) in the material and the dispersive CDW excitations formed through the associated phonon anomalies.

The science of superconductivity

Science has been fascinated by superconductivity since Dutch physicist Heike Kamerlingh-Onnes first discovered it in 1911. Using liquid helium, Kamerlingh-Onnes cooled mercury to 4.2 K (-269°C) and observed that its electrical resistance disappeared. Superconductivity was slowly observed in more materials, as scientists sought to understand why it occurred and to find materials that remain superconducting at higher temperatures.

It wasn't until 1986 that a significant breakthrough in high-temperature superconductivity occurred. Dr Georg Bednorz and Prof Alex Müller had been working with oxides that included copper and a rare earth metal. They reported superconductivity in lanthanum barium copper oxide (LBCO) at a temperature 12°C higher than any previous record. Their discovery of the first successful high-temperature superconductor led to rapid developments in the field and earned them the Nobel Prize in Physics the following year.

High-temperature superconductors lend themselves more readily to practical applications (including highly efficient energy transmission and maglev transport), as they can be cooled using liquid nitrogen, which is cheaper and easier to handle.

LBCO is an example of a cuprate, a family of ceramic compounds in which elements such as lanthanum and barium are sandwiched between layers of copper and oxygen atoms.

Researchers have discovered cuprates that are superconducting at temperatures as high as 130 K (-143°C), and these materials continue to be the focus of intense scientific interest. However, the underlying mechanism through which superconductivity arises is not yet fully understood.

Cuprates are normally insulators, but "doping" them with suitable atoms provides extra charge carriers that allow the material to conduct and - under the right conditions - superconduct. For each material there is a level of doping that maximises the superconducting temperature; below and above that level, the material is referred to as "underdoped" and “overdoped”, respectively.

The "doping" in cuprates leads to a tendency of a uniform electron density in normal metals, i.e. electrons move freely across the system. However, such tendency is costly as electrons also experience a powerful Coulomb repulsion from each other. The competition between the two leads to periodic charge density modulations, i.e. charge density waves (CDWs) within the material. Behaving much like water waves, CDWs have a characteristic length and period depending on the material.

The CDW discovered in LBCO had a very long length, and appears to be statically ordered. Such a long-range ordering was found to manifest at both the copper and oxygen atoms. However, CDW discovered in many underdoped cuprate materials, has rather a short length and tends to fluctuate. Principal Investigator Dr Kejin Zhou says:

It is unknown whether these generic short-ranged CDWs can be seen at multiple chemical species and how they fluctuate in time and space. With the recent development of the I21-RIXS beamline, we are very keen to explore this question. 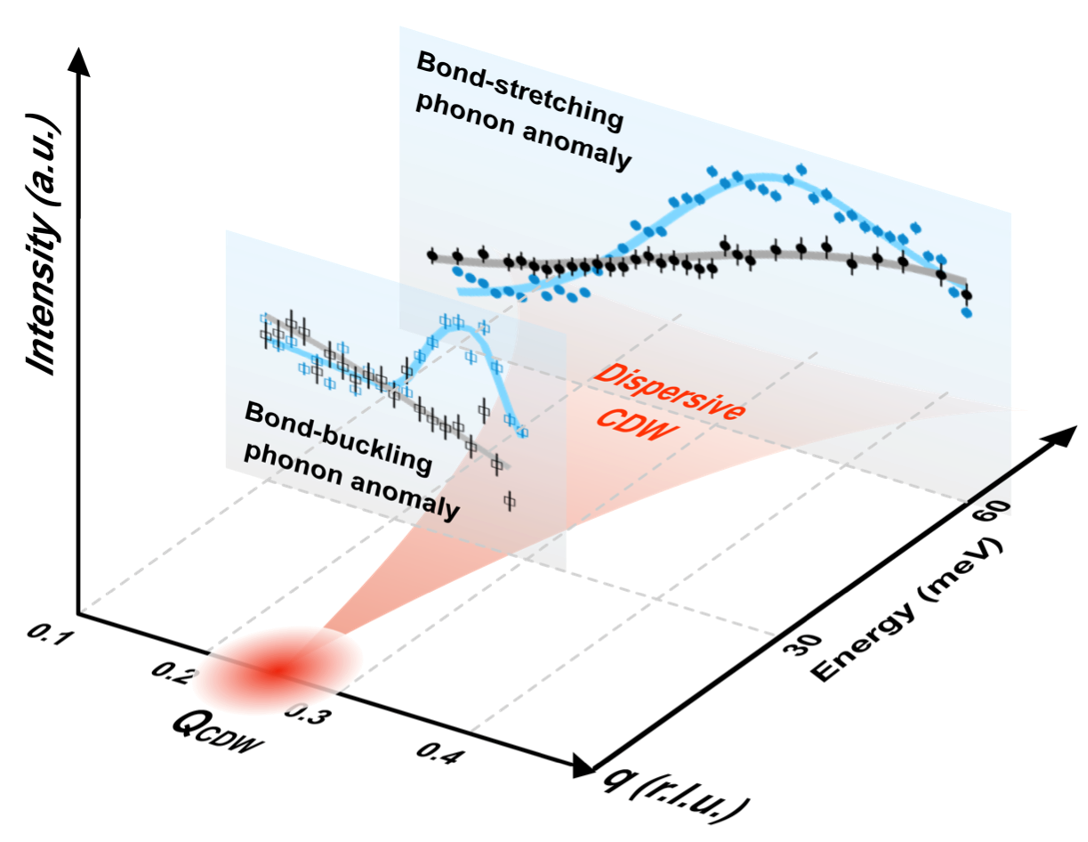 RIXS is one of the few techniques available for probing CDWs. X-rays can be tuned to different chemical species, meaning that the researchers are able to see charges associated with the copper and oxygen atoms separately, and to correlate results across both elements. RIXS is also able to see vibrations of the crystal lattice itself, known as phonons. With its visibility of the changes in charge density, the phonons, and the interaction between the two, RIXS offers the most complete picture of what is happening inside the material.

Employing the ultra-high resolution RIXS at Diamond, the I21 in-house team explored Bi2201 and observed that the short-ranged CDWs at both the copper and oxygen atoms, suggesting that the multiple orbital nature is indeed generic for CDWs in cuprates (Fig.1). As a large number of cuprate superconductors form rather short-ranged quasistatic CDWs, understanding this behaviour is essential.

Remarkably, owing to the strong interaction between “mobile” charges and the crystal lattice, the team also found that the lattice vibrations, i.e., phonons, react to these charge density modulations with noticeable change in its frequency and strength, especially close to the position of the ordering (the wavevector of the CDWs). The strong electron-phonon coupling also enables the team to reveal cone-like, dispersive CDW excitations, emanating from the quasistatic CDWs (Fig.2). Dr Kejin Zhou explains:

We now understand better the fluctuation of CDWs in Bi2201. It is so compelling to see significant changes in phonons response when CDWs are no longer present in a slightly overdoped Bi2201. These results should shed new light in understanding the nature of CDWs and their relationship with other electronic states in cuprates.

The team at I21 will continue to use RIXS to explore these emerging phenomena in exotic materials, providing important insights to improve our fundamental understanding of the mechanism through which superconductivity occurs.

To find out more about the I21 beamline, or to discuss potential applications, please contact Principal Beamline Scientist Kejin Zhou: kejin.zhou@diamond.ac.uk.