How to efficiently deliver targeted, controlled and time-released doses of drugs is a significant challenge for biomedicine. Finding solutions to this challenge would result in substantial benefits for patients, including more effective drug therapy and fewer undesirable side effects. The porous nature of metal-organic frameworks (MOFs) makes them attractive candidates for drug-delivery systems as they can be tailored to hold and transport a variety of encapsulated guest molecules. To this end, employing MOFs as a drug delivery vehicle could offer potential solutions to accomplish the targeted and controlled release of anti-cancer drugs. However, understanding the precise chemical and physical transformations that MOFs undergo as these guest molecules are released is challenging. In work recently published in ACS Applied Materials & Interfaces, researchers from the University of Oxford, University of Turin, and Diamond Light Source used a combination of experimental and theoretical techniques to address this problem. They show how the combination of hydrophilic MOF-encapsulated drug with a hydrophobic polymeric matrix is a highly promising strategy to tune the drug release rate for optimal delivery. Their results demonstrate that high-resolution synchrotron InfraRed microspectroscopy is a powerful in situ technique for tracking the local chemical and physical transformations, revealing the dynamics underpinning the controlled release of drug molecules bound to the MOF pores.

Metal-organic frameworks (MOFs) are a class of multifunctional crystalline solids with a periodic structure constructed from metal nodes bridged by organic linkers. They are of significant interest to researchers because their porous skeletal-like structure can be harnessed to 'capture' guest molecules, which are confined inside the nanoscale cages in MOFs. This makes MOFs promising materials for a wide variety of applications, including drug delivery, CO2 capture, separations, catalysis and sensing.

When it comes to studying drug “guest” confinement and release from a MOF “host”, researchers have hitherto applied only conventional techniques suited for establishing drug release profiles. However, these methods do not reveal the dynamics of guest release, nor the structural evolution of the host during the release process. Understanding the dynamical changes is important for mitigating the "burst effect", a rapid and uncontrolled release of the drug molecules shortly after administration that could lead to overdose.

Under the synchrotron microscope

The copper-based MOF, called “HKUST-1”, was used in this study. It represents one of the most investigated structures in the basic and applied fields of MOFs research today. This is due not only to its ease of synthesis and remarkable properties, but also because the coordinatively unsaturated metal sites found in the pores of HKUST‑1 could facilitate the capture of drug molecules. However, HKUST‑1 is water-sensitive, rapidly degrading in aqueous environments. Researchers from the Multifunctional Materials and Composites (MMC) Lab at the University of Oxford, led by Professor Jin-Chong Tan, have combined HKUST-1 with a hydrophobic polyurethane coating to achieve a controlled drug release in aqueous environments.

Bárbara Souza explains how a close working relationship with Diamond and the MIRIAM beamline B22's exclusive set-up has facilitated this research:

Our group has an established relationship with B22 scientists. The completion of this study took two four-day beamline sessions, during which Mark and Gianfelice were incredibly helpful, offering continuous support to enable these challenging experiments. There were also pre-beamtime discussions and offline tests to ensure that the intended samples were appropriate for the planned studies. The collaboration continues after the experiments, with further support on data analysis and interpretation. Working with Diamond has been a great learning experience for me.

The team's work demonstrates that high-resolution SR-microFTIR is a powerful method for tracking and unravelling the chemical and physical transformations taking place during the release of guest molecules (such as anti-cancer drugs) from MOFs and MOF/polymer composites.

Polymers are also being investigated as potential drug release systems. Still, these results show that while polyurethane protects the MOF structure against water degradation, the MOF is needed to facilitate the release of the drug molecules. HKUST-1 creates hydrophilic channels within the hydrophobic polyurethane, which helps to fine-tune the drug release rate and avoids the undesirable burst effect. The perfect synergy between the hydrophilic MOF and the hydrophobic polymer can be reached by engineering a MOF/polymer composite, such as the HKUST‑1/polyurethane system demonstrated in this study.

Some of the MOFs with high potential for hosting a range of drug molecules suffer from poor stability in water, and the addition of a polymer coating could bring them back into consideration for drug delivery systems.

While MOFs are still very new and require further biocompatibility tests, the combination of a hydrophilic MOF encapsulated drug with a hydrophobic polymeric matrix is a highly promising strategy for the development of future drug delivery systems. 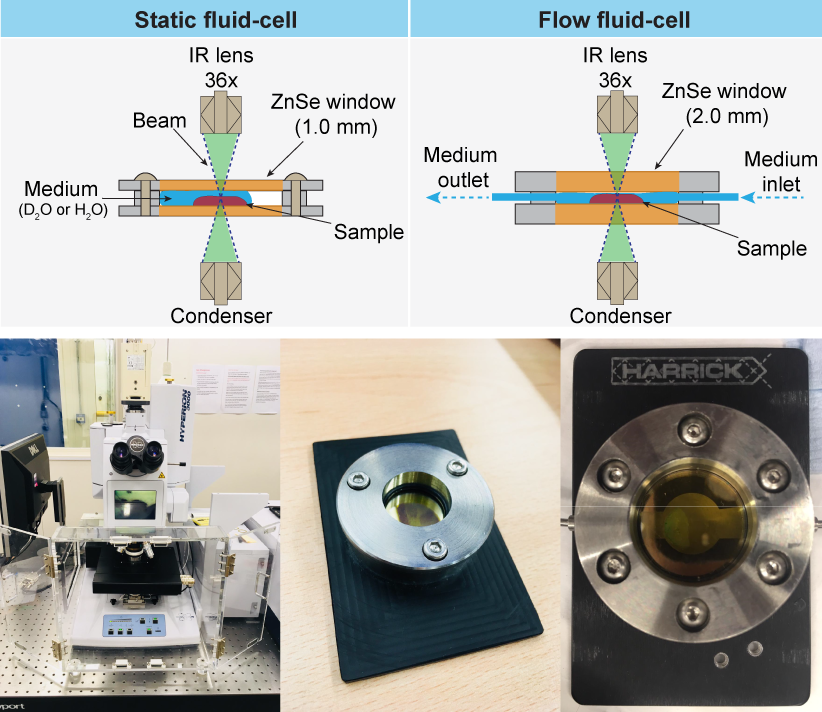 To find out more about the B22 beamline, or to discuss potential applications, please take a look at the IR beamline's webpage: www.diamond.ac.uk\B22; and/or contact the Principal Beamline Scientist Dr Gianfelice Cinque: gianfelice.cinque@diamond.ac.uk