A timely solution for the photosynthetic oxygen evolving clock

A large international collaborative effort aided by the XFEL Hub at Diamond Light Source has generated the most detailed time-resolved studies to date of a key protein involved in photosynthesis. The pioneering work, recently published in Nature, shows how photosystem II harnesses light energy to produce oxygen – insights that could direct a next generation of photovoltaic cells.

Photosynthesis is the process by which plants and other organisms convert light energy into chemical energy. This process has been refined by nature over billions of years and underpins life on Earth as it liberates oxygen for us all to breathe. One of the main players in photosynthesis is a huge membrane bound protein called photosystem II, which contains the oxygen evolving complex, a metal cluster deep within the protein. The reaction site undergoes a series of transitions as it absorbs light energy, and it is these sequential changes that have kept scientists in the dark until now.

Researchers from the Lawrence Berkeley National Laboratory, Berkeley, USA, Humboldt-Universität in Berlin, Germany, SLAC National Accelerator Laboratory, Menlo Park, USA, Umeå Universitet, Sweden, Uppsala University Sweden, University of California and University of California Berkeley with help from our own scientists at the XFEL Hub at Diamond embarked on a colossal project several years ago to define the intermediate structures and electronic properties of the photosynthetic protein.

The team used the XFEL at SLAC with a number of ingenious additions to determine the molecular structure of three intermediate states of photosystem II and two transient states only hundreds of microseconds old during the photosynthetic reaction cycle to an impressive 2 Å resolution. The experimental setup was far from straightforward: the XFEL Hub and collaborators devised a novel sample delivery system to launch on-demand discreet nL volume droplets of microcrystal slurries onto a moving conveyor belt. This enabled them to synchronize and transport the droplet train through a series of optical laser light flashes before arriving at the X-ray interaction zone. When the XFEL pulse arrives, it destroys the sample, which happens at about the speed of sound. Fortunately, the experimental data are safely encoded in the X-ray photons traveling at the speed of light toward two X-ray detectors. One is located in the forward direction and captures diffracted X-rays to be used to determine the atomic structure of the whole protein. The second is placed directly under the interaction region where it collects X-rays photons containing spectroscopic information that bounce off of a set of curved analyser crystals located perpendicular to X-ray flight path. Together these two types of complementary data are completely correlated and reveal the electronic status as well as the atomic structure of the protein and metal cluster in a time-resolved process. 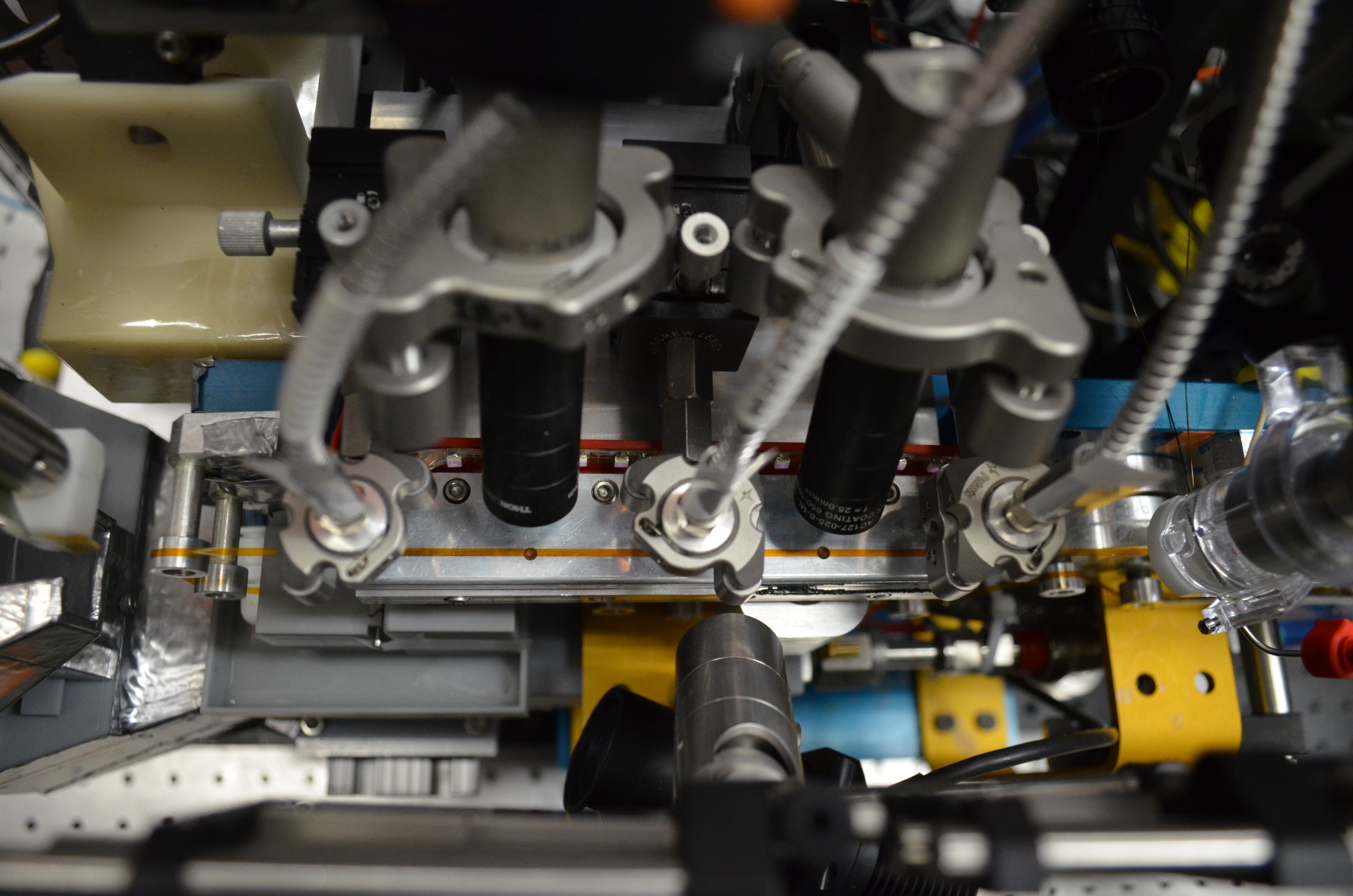 Detail from the beamtime of this research

The active site of photosystem II exists in five different states (S0, S1, S2, S3 and S4), which transition upon exposure to visible light. With each light flash, a central manganese cluster in the protein is oxidised by one electron until enough oxidising power is built up to convert two water molecules into oxygen. This reaction cycle was first identified by Bessel Kok and is known as Kok’s clock, yet the structure of photosystem II as it transitions during the clock was unclear.

To fully characterise Kok’s clock, an XFEL was crucial as it functions in the same timescale as bond formations to enable reactions to be observed. There are only a few XFELs around the world and the XFEL Hub at Diamond was set up to assist scientists who wish to use them. Dr Allen Orville, head of the XFEL Hub and co-author of the study explained further:

At the XFEL Hub, we try to help scientists realise what is necessary to run an experiment at an XFEL, we go from concept right to publication. The Hub encourages the growth of the community in the UK by helping them utilise the potential and types of experiments that can be conducted at an XFEL.

The XFEL Hub helped to develop an innovative sample delivery system to aid with the study. Termed acoustic droplet ejection (ADE), the process involved ejecting nanoLitre-volume droplets of microcrystals using focussed sound waves. Using slurries of microcrystals, the samples could be launched efficiently into the beam at SLAC without any wasting any sample between XFEL pulses.

One of the biggest hurdles of the project was devising a system whereby the samples could be exposed to light pulses at exactly the right intervals to advance the reaction cycle. To overcome this, the collaboration made a bespoke conveyor belt that allowed the team to work their way around the photosynthetic clock using different delay times and light flashes.

We get two pieces of information from every single sample and every single X-ray pulse. In the forward direction we get the diffraction pattern which is used to determine our molecular structure and at 90 degrees we collect emission spectroscopy to see the electronic structure of the manganese cluster that is doing the chemistry. 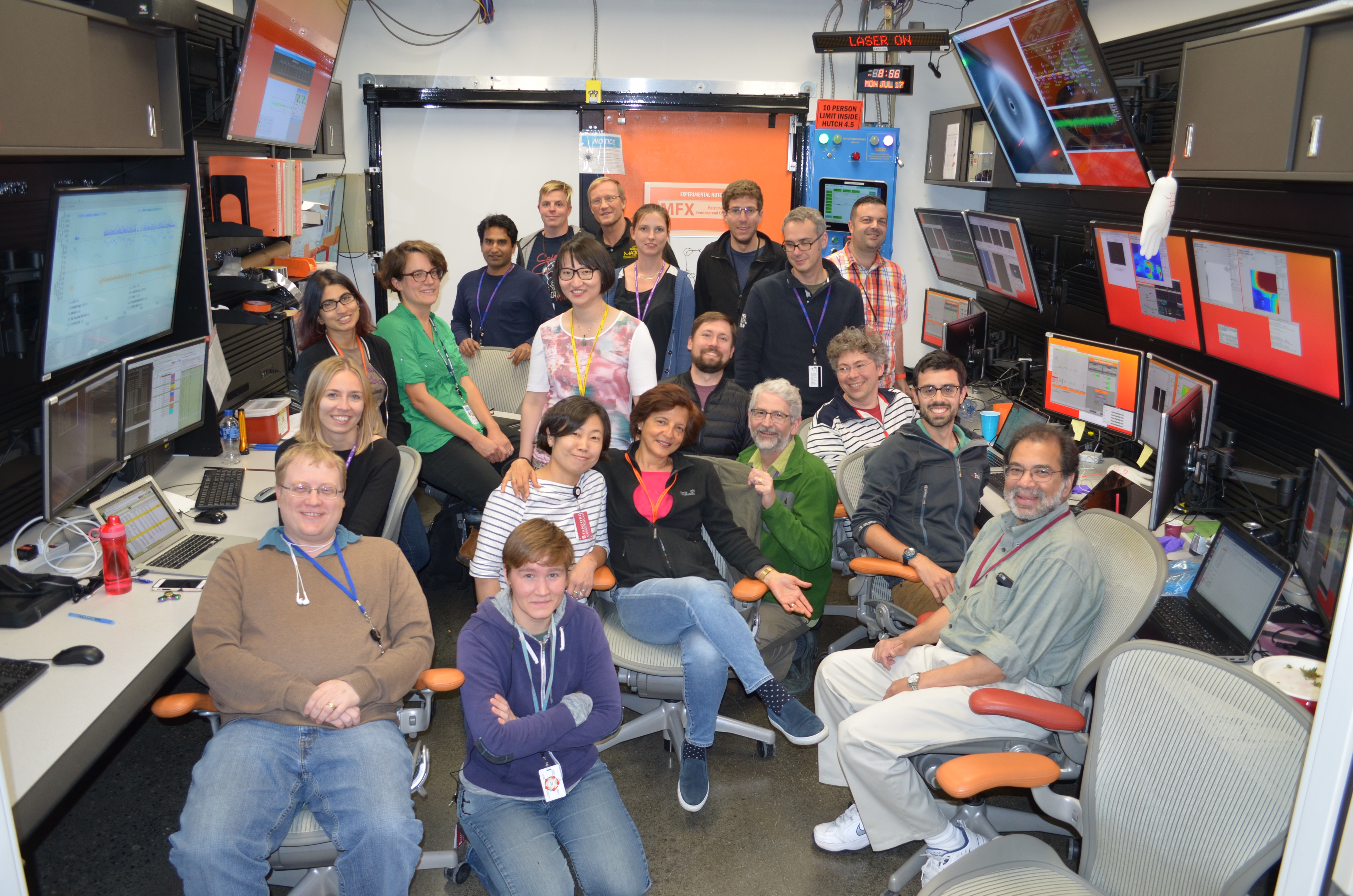 Researchers from the XFEL Hub with their colleagues at LCLS

Collecting both diffraction and emission data from each crystal enabled the researchers to see both the atomic structure at a high resolution and the electronic structure, giving them complete confidence in their observations. In fact, they successfully characterised the states of the clock from S0 up to S3 and two transient intermediates within the S2 to S3 transition.

Nobody else in the world is doing this. We can say with absolute certainty that we are oxidising manganese three up to manganese four and that is then reactive enough to do the chemistry to form molecular oxygen. There is also an addition of a water molecule that happens within the S2 to S3 transition and that is potentially one of the water molecules that eventually turns into molecular oxygen

Many members of the team are interested in artificial photosynthesis and these insights could allow us to harness the efficiency of nature for next generation photovoltaic cells.

The team will continue using XFELs across the world to learn more about photosystem II. Dr Orville concluded: