Synchrotron techniques allow geologists to study the surface of Mars 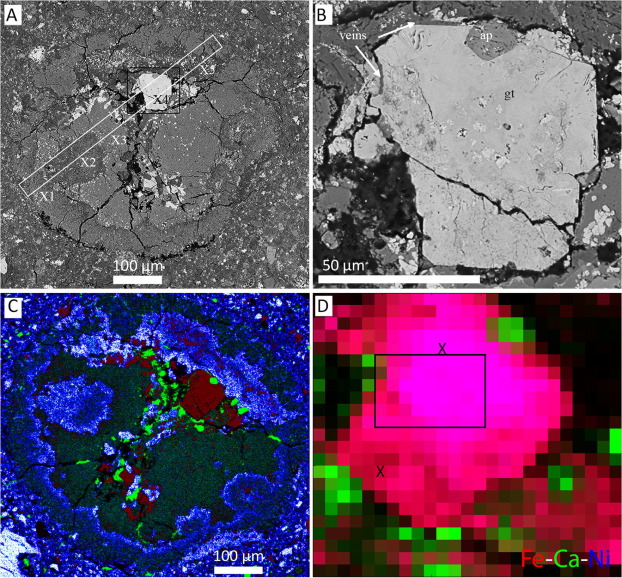 BSE image with locations for XANES/XRD and XRF map

With human and sample-return missions to Mars still on the drawing board, geologists wishing to study the red planet rely on robotic helpers to collect and analyse samples. Earlier this year we said goodbye to NASA’s Opportunity rover, but Insight landed in November 2018, and several space agencies have Mars rover missions on their books for the next few years. But while we’re working on ways to bring samples back from Mars, geologists can study Martian meteorites that have been delivered to us by the forces at play in the Solar System. Earth is bombarded by tonnes of extraterrestrial material every day. Most of it comes from Jupiter Family Comets and the asteroid belt, and much of it burns up in the atmosphere or lands in the oceans, but meteorites from the Moon and Mars do make it to Earth’s surface. In research published in Geochimica et Cosmochimica Acta, scientists used a battery of synchrotron techniques to investigate a very unusual Martian meteorite, whose eventful life story offers some insights to the geological history of Mars.

The sample analysed in this research

Around two-thirds of the meteorites in the world's collections were found in the Antarctic, where their darker colour makes them easy to spot against the snow. (The first British-led expedition to gather meteorites in the Antarctic recently returned with 36 samples.) The meteorite involved in this research, Northwest Africa 8114 (NWA 8114), was found in Western Sahara in Southern Morocco and sold privately through a Moroccan meteorite dealer. It is paired to the ‘Black Beauty’ meteorite - NWA 7034 - meaning that these were once pieces of the same rock.

A sample was made available for scientific research, and geologists discovered that NWA 8114 was part of the first Martian breccia meteorite to have been found; a breccia is a rock made of broken fragments of minerals or rock cemented together, and they form in areas where angular fragments of rock and mineral debris accumulate. NWA 8114 contains material with a wide range of ages, the oldest dating back 4.4 billion years. This meteorite is more similar to the surface samples analysed by the Mars rovers, whereas the previous Martian meteorites found on Earth have been igneous rocks, formed from magma in one place at one time.
Lead author Dr Jane MacArthur explained that the research team were looking for any evidence of water-rock interaction – for example, minerals that only form in the presence of water - and the oxidation state of iron. She says:

This particular meteorite must have been involved in several different impacts on Mars, although we can’t yet tell how many. It is at least two - one to form the breccia, and one to lift the rock from Mars and send it on its way to Earth.

An overview of the mineralogy of the sample

The team used a combination of four synchrotron imaging techniques - and two beamlines - to examine NWA 8114. They used X-ray Fluorescence (XRF) to map the sample to find areas of interest, X-ray Diffraction (XRD) to identify minerals, X-ray Absorption Near Edge Structure (XANES) to analyse the oxidation state of the iron present, and Fourier Transform Infrared spectromicroscopy (FTIR) to see evidence of hydration, via the presence of hydroxide groups.

The team found strange pyroxenes (a large class of rock-forming silicate minerals) that contained flecks of iron oxide grains that were oxidised but not hydrated. Previous work suggests that high impact shock events can cause this, so it is linked to the formation event on Mars. Argon dating of one of the shocked regions showed it to be around 1.2 billion years old. By comparison with experimental studies of shocked pyroxene at different temperatures and pressures, the team could estimate how deep in the Mars surface the meteorite formed, and the result was only around 5 metres deep, which is consistent with a rock that was then lifted off the surface by a further impact.

Lab work on NWA 8114 had suggested that some of the iron oxides were oxidised or hydrated. XRD on I18 confirmed the presence of goethite, a hydrated iron oxide that normally forms in the presence of water, at low temperatures. FTIR on B22 confirmed that the mineral was definitely hydrated, but it hasn’t yet been possible to confirm whether this formed on Mars or on Earth, so it is assumed to be a result of terrestrial weathering, although the sample awaits further testing.

NWA 8114 provides an opportunity to examine the thermal history of a Martian regolith and study near-surface processes and ancient environmental conditions near an impact crater on Mars. At the present time it and its paired stones are the only way to study Martian breccias, and research like gives us a head start on analysing the kinds of materials that would be brought back from any future Mars sample return missions, and will also inform future rover/sample collection missions.

Dr MacArthur was only 4 months into her PhD when the team’s first beamtime at Diamond came around, but she had prepared by attending the Diamond summer school. She says:

The beamline staff were really helpful, particularly in the areas of using the software and working out how to analyse the data at Diamond, and after we’d left. It was great to have them answer queries in person, but they also responded to emailed queries afterwards. 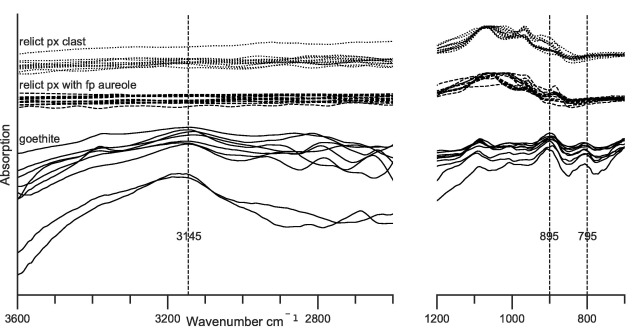 To find out more about the I18 and B22 beamlines, or to discuss potential applications, please contact Principal Beamline Scientists: Konstantin Ignatyev (I18, konstantin.ignatyev@diamond.ac.uk) and Gianfelice Cinque (B22, gianfelice.cinque@diamond.ac.uk).