The 2019 Nobel Prize for Chemistry was awarded for the development of lithium-ion (Li-ion) batteries. Akira Yoshino created the first commercially viable lithium-ion battery in 1985, and since they first entered the market in 1991, they have revolutionised our lives. Non-rechargeable batteries are based on chemical reactions that break down the electrodes. In lithium-ion cells, lithium ions flow reversibly between the anode and the cathode. This rechargeable architecture powers our wireless devices, can store renewable energy and even fuel our vehicles. However, Li-ion cells have reached an energy density bottleneck, and developing the next generation of high-powered batteries is a materials challenge. A big problem lies with the cathode, where Li-rich materials are required to substantially increase the energy density of the Li-ion battery. Unfortunately, these are less reversible than existing cathodes and display a significant loss of voltage after the first charge. An international team of researchers used a variety of techniques to characterise two closely-related cathode materials to investigate the cause of this voltage hysteresis. Their results, recently published in Nature, show it is controlled by the superstructure of the cathode material, offering a new avenue for battery material research. 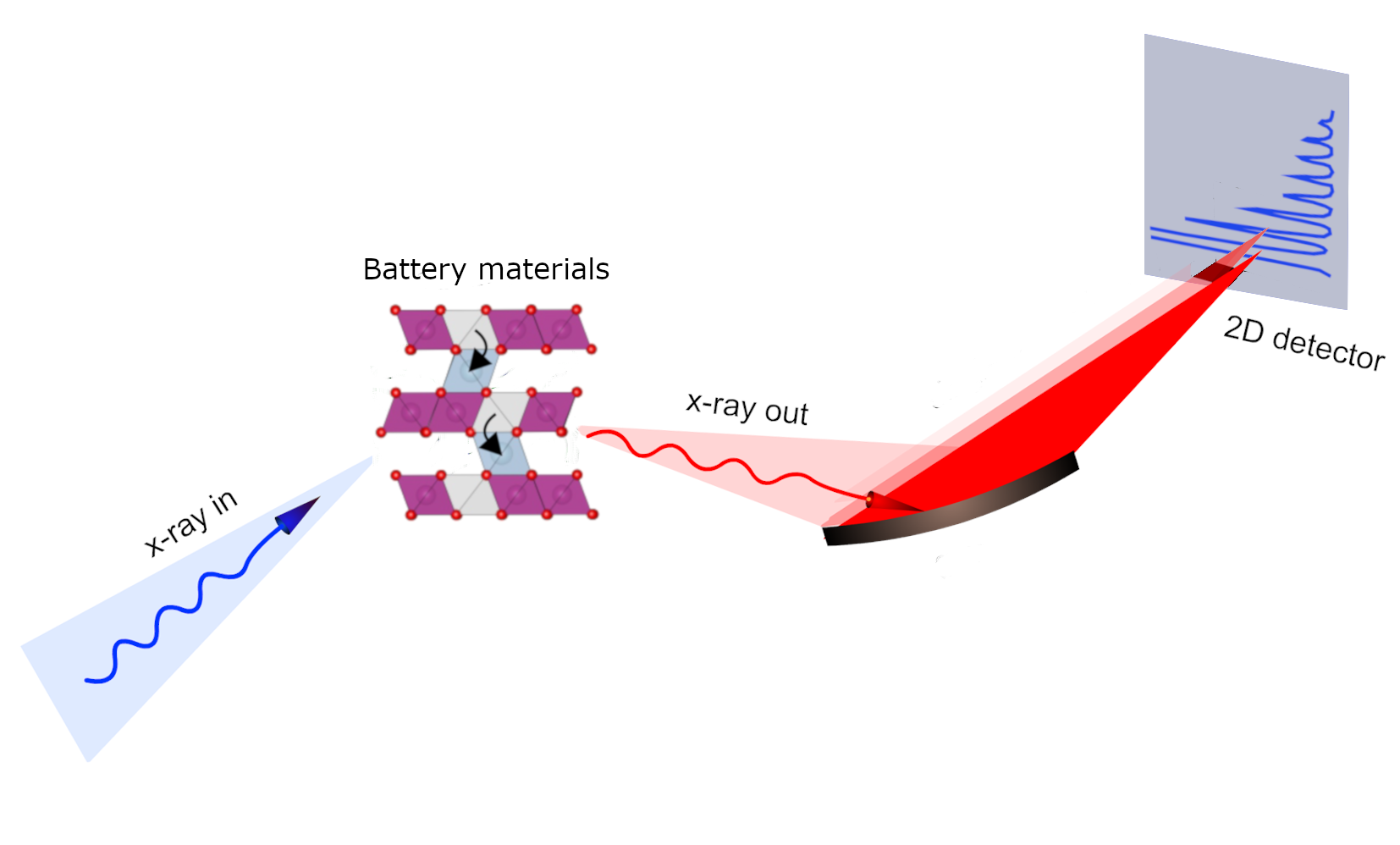 Figure 1 The typical configuration of a RIXS experiment. High energy resolution incoming X-rays shine onto the samples and the scattered X-rays are resolved in energy and get collected by a 2D detector. The image shown at the detector position is a typical vibration spectrum of oxygen gas trapped in the disordered cathode materials.

Packing in more lithium ions is the key to raising the energy density of a Li-ion battery. The current state-of the-art cathode materials are made from alternating layers of lithium and transition metals, such as manganese. Adding lithium to the transition metal layer increases the amount of lithium available for the charge/discharge cycle. However, it reduces the number of transition metal ions available to donate electrons to the external circuit. The required electrons can come from oxide ions in the cathode, in a process referred to as O-redox. The trouble with this process is that as lithium is removed during the battery cycle, the cathode material's structure collapses in a way that is not reversible and which leads to a significant drop in the energy density of the battery.

At the University of Oxford, Robert House is working with a team of researchers who are interested in these Li-rich battery materials, and particularly in why they don't perform as well as we might hope. Using beamline I21 at Diamond Light Source, they wanted to find an explanation for the voltage hysteresis that causes the energy density drop and to find out how it might be avoided.

A tale of two superstructures

The researchers used a variety of techniques to analyse two closely-related cathode materials, Na0.75[Li0.25Mn0.75]O2 and Na0.6[Li0.2Mn0.8]O2, as models for Li-rich cathodes.

We need synchrotron techniques to study O-redox. Research into O-redox commonly uses X-ray absorption spectroscopy (XAS), but RIXS allows us to probe the electronic structure of oxygen in much more detail.

At Diamond, we used high-resolution RIXS to resolve features we couldn't see before. Worldwide, there aren't many spectrometers that could have provided this data, and the experiments we carried out at Diamond led to our most exciting finding

By using high-resolution RIXS, the team determined that oxidised oxygen is forming oxygen gas molecules in the middle of the cathode. The oxygen gas forms by disrupting the highly-ordered pattern of Li and transition metals in the transition metal layer, resulting in disorder. While this process is irreversible, it is possible to reverse the formation of oxygen gas. This, however, happens at a much lower voltage giving rise to the first-cycle voltage loss. These results not only uncover the cause of the voltage hysteresis but set a new precedent for solid-state chemistry - reversible redox of oxygen gas trapped inside a solid.

Most of the O-redox materials studied so far use a honeycomb superstructure for the excess lithium. As a class, these materials are fundamentally unstable in the charged state, losing their order and forming oxygen gas. However, the second cathode material the team examined has a different, ribbon superstructure. It has different pattern of lithium and transition metals that suppresses disorder and the formation of oxygen gas. This more stable structure can better support oxidised O-ions.

We are very glad that the I21-RIXS facility contributed to the key findings of the O-redox research in Li-rich battery materials. The ability to resolve the vibrational spectra of trapped oxygen gas is vital to characterise the superstructure stability of cathode materials during the charge-discharge process. RIXS is a very powerful technique and can be applied to many different types of solid states ranging from battery materials, catalysts, to quantum complex matter.

Despite the ribbon superstructure not being 100% stable, the team's work revealed the critical role of superstructure in preserving high voltage O-redox. Research concentrated on the honeycomb structure, and there could be many more undiscovered superstructure orderings, so these results offer a new strategy for the search of high energy density Li-rich cathodes.
To find out more about the I21 beamline, or to discuss potential applications, please contact Principal Beamline Scientist Kejin Zhou: kejin.zhou@diamond.ac.uk.