The high resolution and wealth of data provided by an experiment at Diamond can lead to unexpected discoveries. The piezoelectric properties of the ceramic perovskite are widely used in commercial actuators, where the strain that is generated varies continuously with applied voltage. However, if the applied voltage is cycled appropriately then there are discontinuous changes of strain. These discontinuous changes can be used to drive magnetic switching in a thin overlying ferromagnet, permitting magnetic information to be written electrically. An international team of researchers used beamline I06 to investigate a ferromagnetic film of nickel when it served as a sensitive strain gauge for single-crystal PMN-PT. Their initial interpretation of the results suggested that ferroelectric domain switching rotated the magnetic domains in the film by the expected angle of 90°, but a closer examination revealed the true picture to be more complex. Their work, recently published in Nature Materials, shows that the ferroelectric domain switching rotated the magnetic domains in the film by considerably less than 90° due to an accompanying shear strain. The findings offer both a challenge and an opportunity for the design of next-generation data storage devices, and will surely be relevant if the work is extended to explore the electrically driven manipulation of more complex magnetic textures. 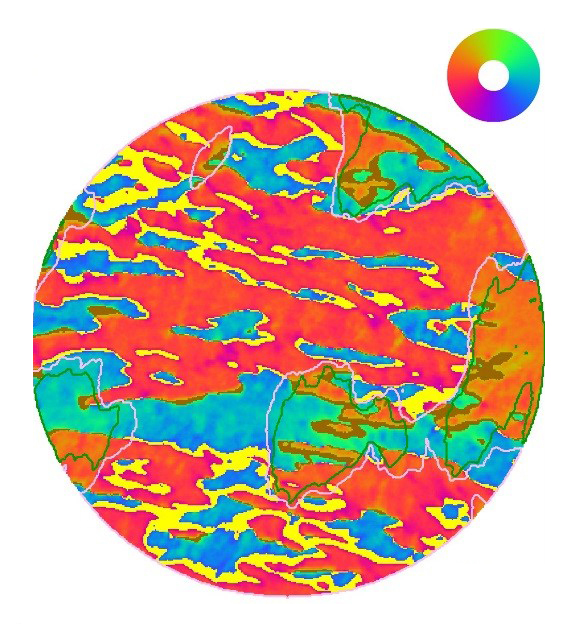 Magnetic vector map (50 µm field of view) describing the magnetisation of a Ni film while applying 50 V across the ferroelectric substrate of PMN-PT. The colour wheel identifies magnetisation direction. Yellow and brown denotes regions whose magnetisation was unaffected by the voltage.

Some solid materials develop electrical charge in response to an applied mechanical stress. This piezoelectric effect means that certain crystals can be used to convert mechanical energy into electricity or vice-versa, and piezoelectric materials are used in a variety of technologies, including the automatic focusing of cameras in mobile phones. For these applications, the strain varies continuously with applied voltage, but cycling the applied voltage can lead to discontinuous changes of strain due to ferroelectric domain switching. These discontinuous changes in strain can be used to drive magnetic switching in a thin ferromagment film, such that data can be written electrically, and stored magnetically.

When an international team of researchers came to Diamond to investigate this effect, they used photoemission electron microscopy (PEEM) combined with X-ray circular magnetic dichroism (XMCD) to provide magnetic contrast. They were using a ferromagnetic film of nickel as a sensitive strain gauge for single-crystal PMN-PT, while varying the voltage across the crystal. Microscopic measurements involved combining two XMCD‑PEEM images to form a magnetic vector map.
At first glance, these microscopic measurements showed what the team were expecting to see – magnetic domains that seemingly rotated by 90° due to ferroelectric domain switching. Macroscopic magnetic measurements that were made using vibrating sample magnetometry led to the same conclusion. However, the high resolution data from Diamond offered the opportunity to dig a little deeper.

For Professor Neil Mathur at the University of Cambridge, taking a closer look seemed obvious.

The data allowed us to do a pixel-by-pixel comparison of the images, and I felt that we should do that, simply because we could.

Unexpectedly, the pixel‑by‑pixel comparison revealed that the magnetic switching angles typically fell well short of 90°. This could be easily explained by including a shear component, predicted from the PMN-PT unit‑cell geometry.

It seems as though researchers have been over-simplifying the magnetoelectric response of PMN-PT-based heterostructures for years, but it’s easy to understand why. Macroscopic measurements average both clockwise and anticlockwise magnetic domain rotations, cancelling the magnetic signature of the shear components. Analysing microscopic measurements is normally performed with a colour wheel, which makes it easy to see whether magnetic domains are oriented up/down or right/left, but each colour that we perceive covers a wide range of angles, masking the truth.

This new finding should be applicable to similar materials, and offers both a challenge and an opportunity for the development and miniaturisation of devices based on magnetoelectric materials.

Our finding means that these systems are going to behave differently to what one would have originally expected after miniaturisation. This will be a challenge for device designers, but there is also a huge opportunity here, because it means that two sets of data can be written to the same device with magnetic and electric fields, thus doubling the storage density.

In future, Professor Mathur believes it will become normal to consider the shear strain that arises when low‑symmetry ferroelectric domains undergo switching.

The team are now continuing their work by looking at more complex magnetic textures, such as skyrmions. They want to investigate how these complex objects can be destroyed, created and modified by electrically driven strain, and whether they can create magnetic textures that simply haven’t been seen before.
To find out more about the I06 beamline, or to discuss potential applications, please contact interim Principal Beamline Scientist Francesco Maccherozzi: Francesco.Maccherozzi@diamond.ac.uk.