A novel synchrotron technique for studying diffusion in solids

Understanding and controlling how the diffusion process works at the atomic scale is an important question in the synthesis of materials. For nanoparticles, the stability, size, structure, composition, and atomic ordering are all dependent on position inside the particle, and diffusion both affects all of these properties and is affected by them. A more thorough understanding of the mechanisms and effects of diffusion in nanocrystals will help to develop controlled synthesis methods to obtain the particular properties; however, conventional methods for studying diffusion in solids all have limitations.
Given the need for imaging techniques that are sensitive to slower dynamics and allow the diffusion behaviour in individual nanocrystals to be investigated at the atomic scale and in three dimensions (3D), a team of researchers used the strain sensitivity of Bragg coherent diffraction imaging (BCDI) to study the diffusion of iron into individual gold nanocrystals in situ at elevated temperatures. Their work was recently published in the New Journal of Physics.
Tweet

Direct methods for studying diffusion in solids (such as mechanical and sputter profiling, secondary ion mass spectrometry, and electron microprobe analysis) provide only a macroscopic quantity, the diffusion coefficient. Indirect methods (such as quasielastic neutron spectroscopy and Mössbauer spectroscopy) can provide microscopic information on the diffusion process, but are limited to a narrow number of isotopes and relatively fast diffusivity values. Existing methods for diffusion studies in solids also tend to average signals over a number of structures, but in nanocrystals sample heterogeneity is significant and can affect results. Transmission electron microscopy (TEM) allows diffusion to be studied in individual nanoparticles, but is limited to thin samples (<100 nm) and the necessary sample preparation can be destructive.
The ability of BCDI to image strain in 3D in individual nanocrystals is extremely useful and highly novel. This developing technique uses coherent X-rays, which allows strain within individual nanocrystals to be mapped in 3D. Researchers measure the diffraction pattern of the crystal, and then use iterative phase retrieval algorithms to reconstruct the crystal’s 3D structure in real space. The reconstructed electron density consists of magnitude (usually referred to as amplitude) and phase, which correspond to the crystal morphology and strain. The strain sensitivity of BCDI can be used to investigate the diffusion of atoms into a nanocrystal, as diffusion is expected to induce measurable lattice distortions.

In this study, a team of researchers from University College London, London, Brookhaven National Laboratory in the USA, Diamond and the Research Complex at Harwell used BCDI on the I07 beamline to investigate the 3D diffusion behaviour in a gold-iron alloy. Gold nanoparticles have interesting optical properties, and their surface can be tuned for specific functions. Their biocompatibility makes them an obvious choice for medical applications. Iron can be used to introduce interesting magnetic properties into nanoparticles, however, it is prone to oxidation and has high cell toxicity in a medical context.
Gold–iron nanoparticles offer a material with both magnetic and optical properties that is both biocompatible and protected from oxidation. They have potential medical applications in magnetic resonance imaging, hyperthermia, and targeted drug delivery. 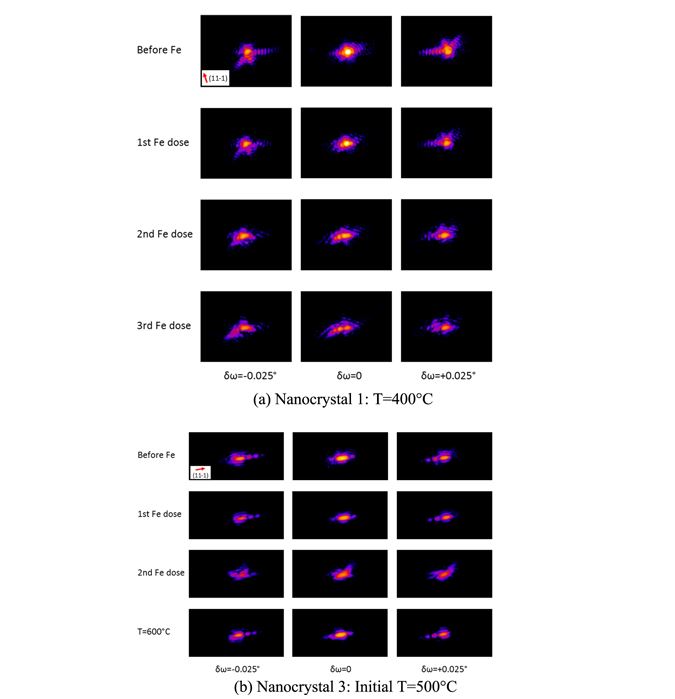 The team measured the diffraction pattern of individual gold nanocrystals as a function of temperature and time, before and after iron deposition. They used phase retrieval algorithms to obtain real space reconstructions of the nanocrystals, observing alloying of iron with gold at sample temperatures of 300-500°C and dealloying of iron from gold at 600°C. They found that the volume of the alloyed region in the nanocrystals increased with iron dosage. Their results suggested that the samples reached equilibrium relatively quickly after iron deposition, and the resulting phase distribution within the gold nanocrystals after the iron depositions suggests a contraction due to diffusion of iron.

This study demonstrates the utility of BCDI for studying 3D diffusion and alloying behaviour in individual nanocrystals at the atomic scale. It successfully investigated the changes in the structure of individual gold nanocrystals as a result of diffusion of and alloying with iron, at different temperatures and metal doses, with picometre strain resolution.
Lead author Ana Estandarte adds: “BCDI is a technique that can be applied to a wide range of materials and its ability to non-destructively examine the 3D strain in materials at the atomic scale during dynamic processes is powerful. Having successfully investigated the changes in the nanocrystals during diffusion in this study, we are looking to apply the technique in the future to investigate processes in battery materials.”
To find out more about the I07 beamline, or to discuss potential applications, please contact Principal Beamline Scientist Francesco Carlà: francesco.carla@diamond.ac.uk.