Access for European users is funded through the Horizon 2020 iNEXT project. iNEXT users should use only the Rapid Access proposal route at Diamond and provide the iNEXT proposal ID (PID) in their application. Users outside of the UK and Europe typically have to cover their own travel and subsistence costs.

Solving the structure of an HSP90 co-chaperone with cryo-EM

The structure of a key protein folding assistant has been solved to a resolution of 3.6 Å, using cryo-electron microscopy (cryo-EM) at the Electron Bio-Imaging Centre (eBIC) at Diamond. The structure, as detailed in Nature Communications, demonstrated that the co-chaperone possessed remarkable flexibility which allowed HSP90 to interact with a diverse range of client proteins.

Large protein complexes in cells, such as some kinases and polymerases, are often assembled with the assistance of a molecular chaperone known as HSP90. Many of the complexes assembled by HSP90 control cell growth and are implicated in cancer, so HSP90 inhibitors are currently being evaluated in clinical trials.

Surprisingly, HSP90 needs a co-chaperone called the R2TP/Prefoldin-like (R2TP/PFDL) complex in order to function properly, yet the exact way that this co-chaperone interacts with HSP90 is unclear. To fully understand its role, a collaborative effort between scientists from Spain and the UK set out to characterise the R2TP core. They conducted cryo-EM to solve the structure of the large multi-subunit protein to a resolution of 3.6 Å.

The team noted that the R2TP core differed from its yeast equivalent as it contained a domain at the C-terminus of RPAP3, the HSP90 recruiting component on R2TP, which tightly anchors RPAP3 to R2TP. This tight binding at the C-terminus frees the HSP90-binding domains in RPAP3 at the N-terminus, providing a flexible tether to HSP90, which allowed it to act on a diverse range of client proteins. Fully understanding how HSP90 and its co-chaperone supports the assembly of proteins involved in cancer might bring us a step closer to the development of a new series of anticancer agents. 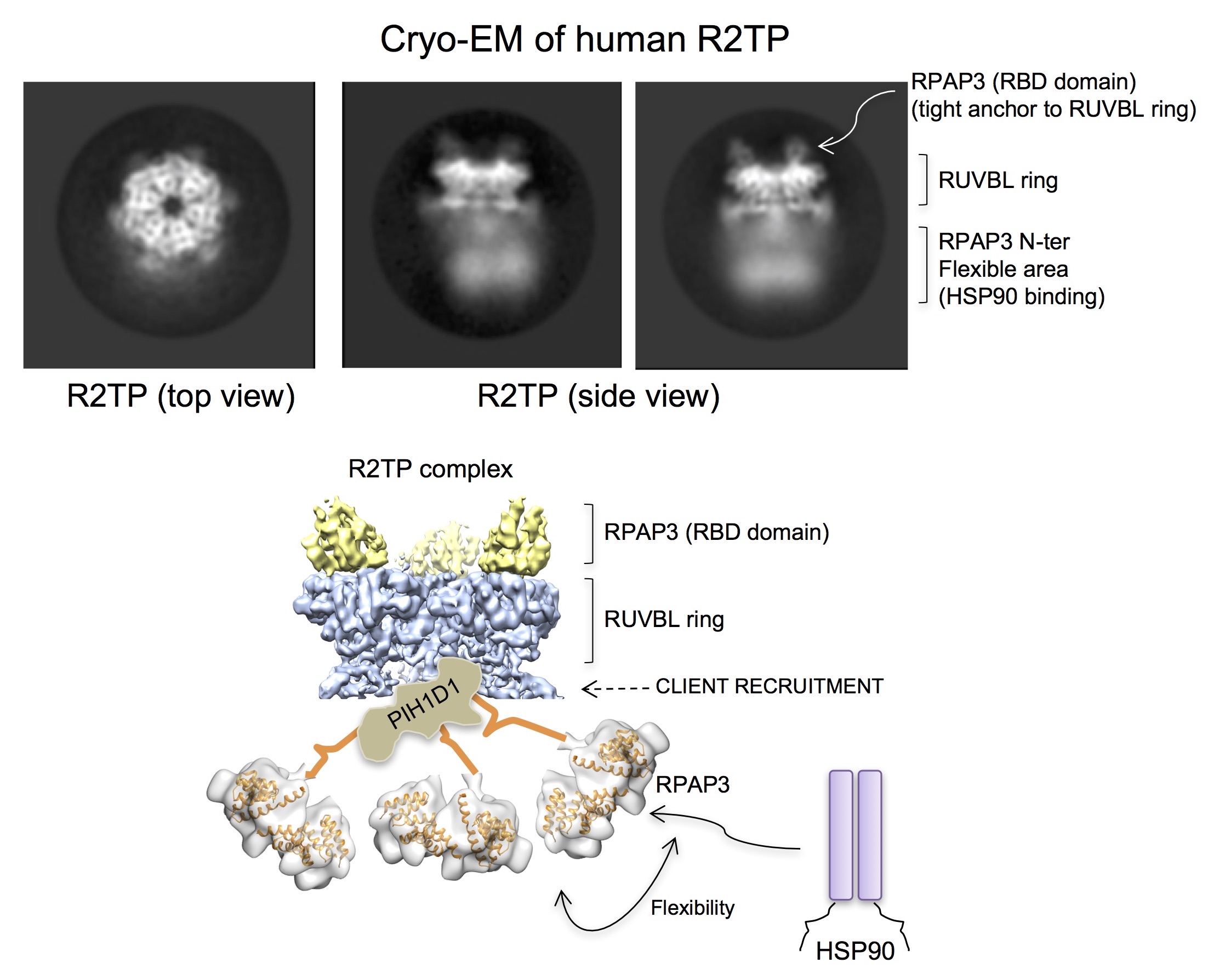 With the knowledge that HSP90 is involved in the stabilisation of proteins involved in cancer, gaining insights into its activity is of utmost importance. As such, efforts were undertaken to characterise the human R2TP core by scientists from the Centre for Biological Research  (CIB-CSIC, Madrid), the Spanish National Cancer Research Centre (CNIO, Madrid), Centre for Cooperative Research in Biosciences (Derio, Spain), University of Sussex and the MRC Laboratory of Molecular Biology (Cambridge).

Professor Oscar Llorca from the Spanish National Cancer Research Centre explained their aims: “We wanted to see what human R2TP looked like and how it works. Some domains of the human R2TP have been crystallised, but the architecture and structure of the full complex was poorly understood.”

Difficult to crystallise
The study was four years in the making, with the team effectively collaborating to conduct both X-ray crystallography and cryo-EM to address the structural analysis of R2TP. Evidence of their fruitful work came last year when they successfully solved the structure of the yeast R2TP using cryo-EM.

For the human equivalent, cryo-EM was again the technique of choice, as unfortunately only a fragment of the C-terminal domain could be crystallised. “These very complex machinery are very flexible so very difficult to crystallise. Now the improvements of cryo-EM allow you to really reach a resolution where we can see a lot of details and do modelling,” clarified Prof Llorca.

The data was collected using one of the Titan Krios microscopes at eBIC, with three images per hole, using a GATAN K2-Summit detector in counting mode and a slit width of 20 eV on a GIF-Quantum energy filter.

Extra domain
The group were able to directly compare their results in this human study with those of the yeast system. They found that the yeast equivalent was a far simpler complex, with smaller proteins acting as a scaffold to bring the HSP90 and client proteins together.

One of the main differences was an extra domain at the C-terminus of the human RTP2 component known as RPAP3, which had never before been structurally characterised. “The EM structure we obtained showed that this new domain provided a very tight anchor for RUVBL1 and RUVBL2, so that the rest of the protein can be very flexible,” explained Prof Llorca.

The team hypothesised that the region of RPAP3 that binds HSP90 is completely mobile to allow it to bind a diverse range of complexes. The flexible tether offered by RPAP3 helps HSP90 accommodate proteins of varying sizes.

One of the complexes aided by HSP90 is a kinase known as mTOR, famed for its role in cancer cell survival. The collaboration between Laurence H. Pearl and Oscar Llorca next hope to understand exactly how HSP90 and R2TP support assembly and stability of mTOR and other kinases in the family, with their ultimate aim to find a way of preventing its assembly to inhibit cancer growth.

To find out more about the eBIC, or to discuss potential applications, please contact Dr Alistair Siebert: alistair.siebert@diamond.ac.uk