A dance of enzymes

Pol III is a crucial polymerase involved in the transcription of essential housekeeping genes in every cell type. Right before the start of transcription, it forms a pre-initiation complex (PIC) with the transcription factor TFIIIB. In a paper published in Nature, a team led by Dr Alessandro Vannini of the UK’s Institute for Cancer Research used cryo-electron microscopy at Diamond Light Source’s Electron Bio-Imaging Centre (eBIC) to describe the structure and dynamics of the PIC. Their findings reveal a carefully choreographed process in which the PIC assembles around the DNA and is primed for the remainder of the transcription process. This orchestrated initiation makes Pol III an extremely efficient polymerase. Developing drugs to interfere with this process may be a viable therapeutic approach for diseases in which Pol III has been implicated, including cancer.

Figure 1: An animated rendering of the Pol III PIC complex bound to DNA. The structure is accurate, but the DNA strand has been extended. (credit: Jeroen Claus/Phospho Biomedical Animation)

Frozen figures
A class of proteins known as RNA polymerases synthesise RNA from DNA during transcription. One of them, RNA polymerase III (Pol III) is responsible for the transcription of many housekeeping genes, such as tRNAs, 5S RNA, and other small RNAs that are expressed in all cell types. In order for transcription to start, Pol III forms a pre-initiation complex (PIC) with the transcription factor TFIIIB around the target DNA. Since misregulation of Pol III has been implicated in diseases such as cancer and inherited neurodegenerative conditions, understanding the structure and mechanics of the PIC would not only shed light on a crucial and fundamental biological process but may also open novel avenues for disease treatment.

A team led by Dr Alessandro Vannini used cryo-electron microscopy (cryo-EM) to investigate the Pol III PIC. According to Dr Vannini, advances in the detectors, microscopes, and software involved in cryo-EM in the last five to six years have made it possible to obtain very high resolution data with the technique. “When I looked at similar complexes with cryo-EM in 2010-2011, the lower resolution meant that we could see general shapes but certainly couldn’t derive atomic models,” he recalls. Cryo-EM is also able to provide information about many different configurations or states in a single sample since the samples are in solution rather than being crystallised in a single state. The combination of very high resolution and imaging multiple conformations made cryo-EM an ideal technique for studying the complex and dynamic Pol III PIC.

To get a complete picture of the Pol III PIC, Dr Vannini’s team imaged the unbound Pol III protein from yeast and the entire Pol III PIC bound to DNA at the start of transcription, as well as the structure of mutant forms of the complex. The electron microscopy was carried out at Diamond’s eBIC and at the EMBL in Heidelberg. Using the data, the team were able to reconstruct different states of the Pol III PIC at a resolution of 3-4 angstroms. “We were incredibly pleased with the level of support we got at Diamond,” says Dr Vannini. “The technical knowledge of the people managing the microscope is incredible. They really know what they're doing so they can maximise the throughput and offer advice on the best procedure for data collection.” 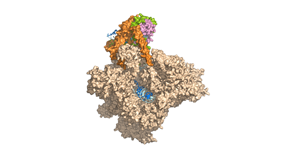 Complex choreography
Their findings revealed that formation of the PIC involves a slew of carefully orchestrated conformational changes to prepare the complex for transcription. When TFIIIB and Pol III together bind to the target DNA, rearrangements of Pol III subunits open the two DNA strands into a transcription bubble which is held in the correct orientation by conserved pockets in Pol III. Together with other conformational changes, this puts the Pol III PIC in a configuration which is ready for transcription. “There aren’t too many structural rearrangements left to occur for the next step,” says Dr Vannini. “Once the PIC is formed, the polymerase is basically elongation-ready.” This came as a surprise to the team, who expected a PIC similar to those of other polymerases, which aren’t primed as efficiently.

Another important conformational change causes Pol III to clamp onto the DNA downstream of the transcription bubble, gripping it in a subunit described as the “lobe tip”. The lobe tip is involved in recognising the termination signal which marks the end of the gene. “It’s interesting that initiation – the very first step of the transcription – is actually also linked with termination,” comments Dr Vannini.

The detailed picture of Pol III PIC enabled the team to precisely explain the malfunctions occurring in several known PIC mutants. For example, they showed that mutation of a subunit to TFIIIB prevents the formation of the transcription bubble not because it fails to interact with the DNA but because it fails to properly reconfigure the Pol III subunits involved in the process. With this level of knowledge, it may be possible to design molecules to interfere with PIC in disease conditions. “The structure we elucidated may provide a framework for developing molecules that inhibit the interactions that are crucial during the initiation process. Whether this will be effectively therapeutically relevant remains to be seen, but it’s definitely important as a tool to develop chemical tools to validate this as a target.”

In the meantime, Dr Vannini plans to investigate a more complete version of the PIC which includes “another big factor” that is required for transcription in vivo. “Another big question is how this process happens in human cells. It’s not absolutely conserved – there are specific features of the human apparatus which make it very interesting and may be of potential interest for targeted therapies.”