A new anticancer agent developed by the University of Warwick has been studied using microfocus synchrotron X-ray fluorescence (SXRF) at I18 at Diamond Light Source. As described in The Journal of Inorganic Biochemistry, researchers saw that the drug penetrated ovarian cancer cell spheroids and the distribution of zinc and calcium was perturbed.

Platinum-based chemotherapy agents are used to treat many cancer patients, but some can develop resistance to them. To address this issue, scientists from the University of Warwick sought to employ alternative precious metals. They developed an osmium-based agent, known as FY26, which exhibits high potency against a range of cancer cell lines. To unlock the potential of this novel agent and to test its efficacy and safety in clinical trials, the team need to fully understand its mechanism of action.

To explore how FY26 behaves in tumours, the team grew ovarian cancer spheroids and used SXRF at I18 to probe the depth of penetration of the drug. They noted that FY26 could enter the cores of the spheroids, which is critical for its activity and very encouraging for the future of the drug. SXRF also enabled them to probe other metals within the cells, which showed that the distribution of zinc and calcium was altered, providing new insights into the mechanism of FY26-induced cell death. 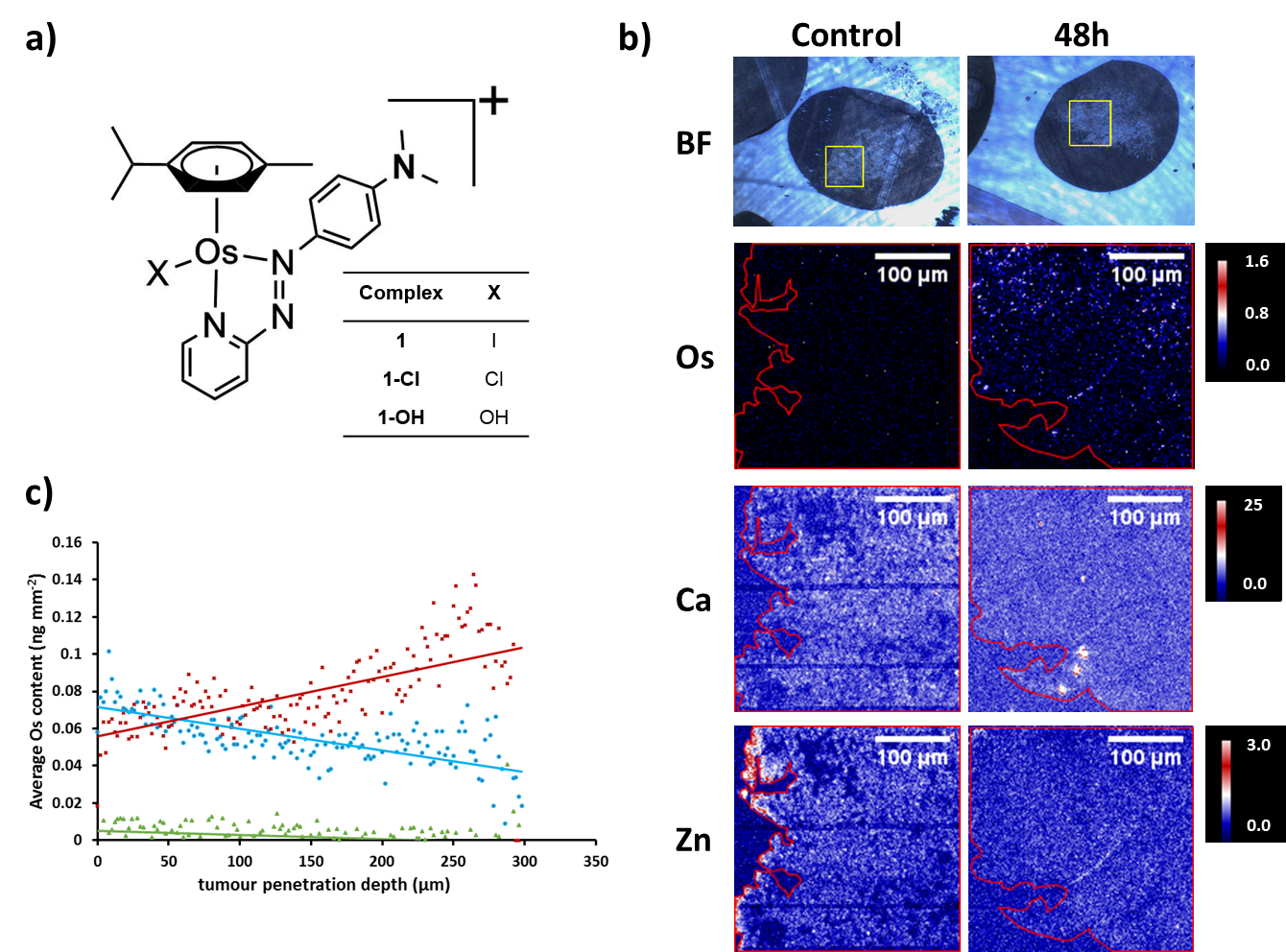 A team of scientists from the University of Warwick turned their attention to other types of precious metals and developed a series of organo-osmium complexes. One of them, termed FY26, stood out in early experiments and when screened by the Sanger Institute against over 800 cancer cells lines, exhibited 49 times greater potency than current platinum therapies.

In vitro studies by the scientists at Warwick also demonstrated that FY26 had a different mechanism of action to platinum therapies, but the exact details of this were unknown. The team hope to advance the drug into clinical trials, but need to understand how it functions and how it enters cancer cells.

Lead investigator and postdoctoral researcher at University of Warwick, Dr Carlos Sanchez-Cano, elaborated on their aims:  “We knew the compound gets into cells and is concentrated in the interior (probably in the mitochondria), but one of the things we didn’t know was how the drug would behave in a tumour. X-ray fluorescence allowed us to demonstrate that our compound does indeed enter the core of a tumour.”

Good resolution and high sensitivity
The team grew ovarian cancer cells into spheroids (approximately 600 μm in diameter), which they used as simple tumour models for their experiments. They treated the spheroids with physiologically relevant levels of FY26 and used X-ray fluorescence at I18 to map the location of the drug accurately.

“I18 is a microfocus beamline, so the size of the beam can be focussed up to 2x2 μm2, which allowed us to look into the tumour in high detail. The problem we have is that the concentrations of the drug are quite low in biological samples, so we need good sensitivity. I18 combines good resolution with high sensitivity, which allows us to detect our drug within the tumour model,” explained Dr Sanchez-Cano.

Additionally, X-ray fluorescence also allowed the team to map several different elements at the same time. In the same scan they obtained information on multiple elements such as zinc and calcium to examine their distribution.

Penetrated the inner core
Incredibly the team saw that their drug penetrated the inner core of the spheroids and the depth of penetration was related to the drug incubation time. They also observed the perturbation of other metals within the tumour models to gain important insights into the mechanism of action of FY26.

Principal investigator of the study and Professor of Chemistry at the University of Warwick, Professor Peter Sadler, described their observations: “Calcium was disturbed by the drug and that might have indications for the mechanism of action. In fact, there are hallmarks of immunogenic cell death with the major release of reactive oxygen species and the movement of calcium from the endoplasmic reticulum. We also see a change in the distribution of zinc, which indicates that the structure of the nucleus is impaired.”

The team are now investigating delivery of this drug with the aid of nanoparticles and they will conduct future synchrotron studies into these delivery systems. They also plan to use I14 to focus down into organelles to observe the drug in individual mitochondria.

The team are at the beginning of a long journey with the organo-osmium complex and are taking preliminary steps into preclinical testing, having just completed a toxicology study. The valuable information gathered by this study at Diamond will help to inform these future trials to progress this novel anticancer agent.

To find out more about I18, or to discuss potential applications, please contact Dr Konstantin Ignatyev: konstantin.ignatyev@diamond.ac.uk