The detection of iron and calcium compounds in amyloid plaque cores

X-ray spectromicroscopy at the Scanning X-ray Microscopy beamline (I08), here at Diamond, has been utilised to pinpoint chemically reduced iron and calcium compounds within protein plaques derived from brains of Alzheimer’s disease patients. The study, published in Nanoscale, has shed light on the way in which metallic species contribute to the pathogenesis of Alzheimer’s disease and could help direct future therapies.

Alzheimer’s disease is a neurodegenerative disease that is associated with dementia and shortened life expectancy. The disease is characterised by the formation of protein plaques and tangles in the brain that impair function. As well as protein plaques, perturbed metal ion homeostasis is also linked with pathogenesis, and iron levels in particular are elevated in certain regions of the brain.

A team of scientists with a long history in exploring biomineralisation in Alzheimer’s brains set out to characterise the iron species that are associated with the amyloid protein plaques. They extracted samples from the brains of two deceased patients who had Alzheimer’s and applied synchrotron X-ray spectromicroscopy to differentiate the iron oxide phases in the samples.

They noted evidence that the chemical reduction of iron, and indeed the formation of a magnetic iron oxide called magnetite, which is not commonly found in the human brain, had occurred during amyloid plaque formation, a finding that could help inform the outcomes of future Alzheimer’s therapies. 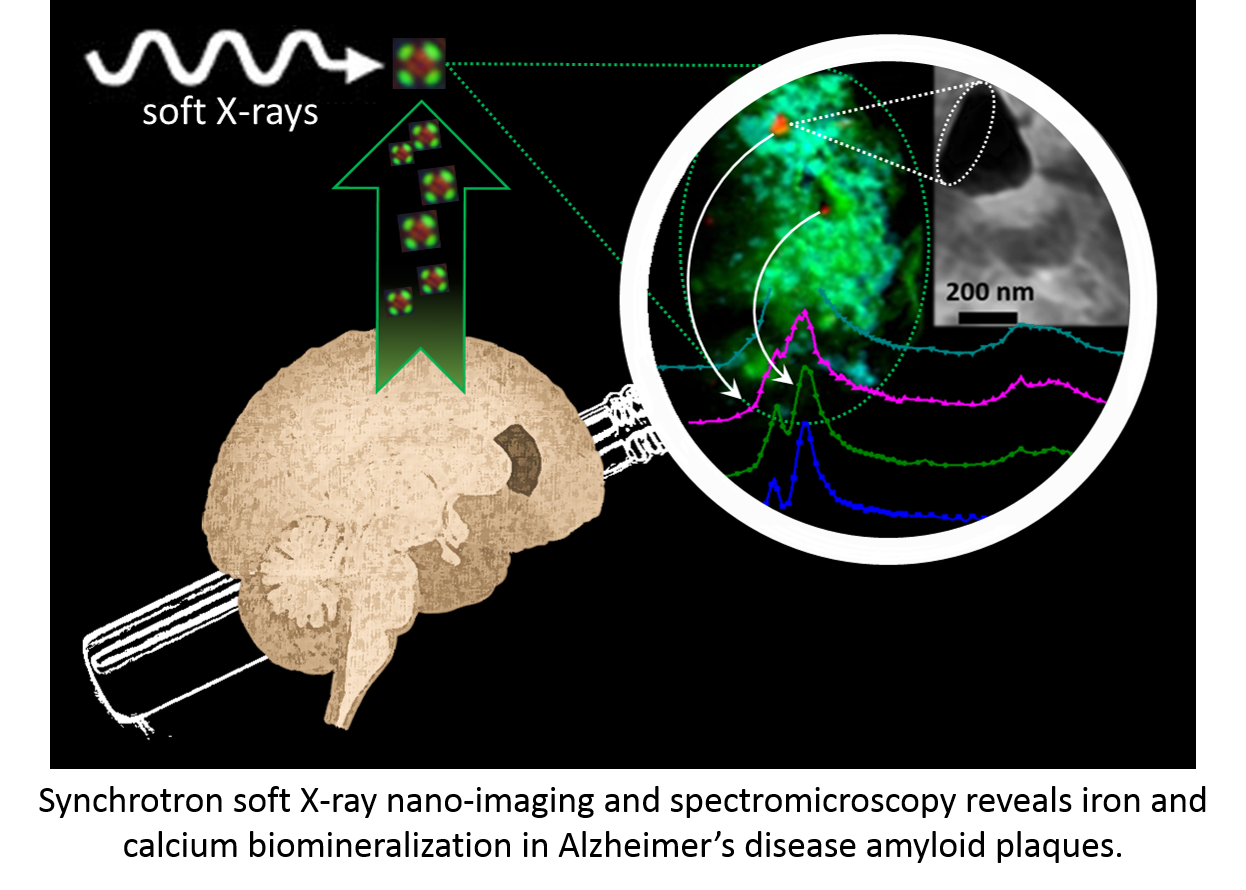 Reduced species of iron
Alzheimer’s disease is the most common form of dementia, which affects approximately 850,000 people in the UK. With Alzheimer’s disease prevalence expected to rise over the coming decades, and with no cure or treatment, research into the pathogenesis of the disease is vital.

One of the hallmarks of Alzheimer’s is the formation of amyloid plaques. They arise via the accumulation of amyloid-β, which forms insoluble deposits in the brain and impairs its function. Alongside plaque formation, metal homeostasis is also disturbed. Levels of iron are increased in several regions of Alzheimer’s brains and high concentrations of chemically reduced forms of iron are associated with pathological features of the disease.

A collaboration between scientists from Keele University, University of Warwick, University of Florida and The University of Texas at San Antonio set out to study the relationship between reduced species of iron and amyloid-β. This team already had a track-record in studying metals in Alzheimer’s brains and their work is underpinned by the hypothesis that there was more chemical reduction of iron than normal when amyloid-β aggregates.

“We were interested to know how iron interacts with the amyloid protein when it is forming the insoluble deposits. We wanted to look at human materials to see if there is evidence for the process that we see in vitro,” explained Dr Joanna Collingwood, Associate Professor at University of Warwick and a member of the research team.

Extracted amyloid plaque cores
The team extracted amyloid plaque cores from two deceased patients who had a formal diagnosis of Alzheimer’s. Scanning transmission X-ray microscopy was conducted at the Advanced Light Source (ALS) in Berkeley, USA and at beamline I08 at Diamond. A series of images were taken at photon energies spanning an absorption edge to produce a ‘stack’, which were used to determine the chemical oxidation state of the minerals at each region of interest. In situ X-ray Magnetic Circular Dichroism (XMCD) was also conducted at I08 to probe the magnetic state of the iron species, and thus confirm the presence of the magnetic iron minerals.

Dr Collingwood explained the importance of I08 in the study: “We needed to be able to see on a length scale that was relevant to the structures within the amyloid plaque cores, which required a beamline that was capable of working at tens of nanometres resolution and could allow us to look at the transition metals. We were able to collect information about the organic components by observing the spectral features of the protein content, and then looking at the metal distributions associated with the organic material. This allowed us to image and analyse organic and inorganic material from the same region in the sample without any kind of labelling.”

Production of free radicals
The team saw many types of reduced forms of iron within the extracted amyloid plaque cores. They deduced that the atypical chemical reduction of iron and increased redox cycling in Alzheimer’s brains contributed to the pathogenesis of the disease.

“Where you have chemical reduction of iron it provides the opportunity for the catalytic production of free radicals. Damage from free radicals has been reported at sites of amyloid aggregation, so amyloid-associated toxicity could be driven by iron reduction,” explained Dr Collingwood.

Intriguingly, with the aid of XMCD, they also saw an unusual magnetic species of iron called magnetite within the plaques. Ptychographic observations at the ALS indicated that the magnetite in this sample was biogenic, and not derived from industrial sources such as pollutants as reported in another recent study.

The team further added to the knowledge base of Alzheimer’s pathology by finding evidence of calcium in the amyloid plaques, and demonstrated that multiple phases of calcium must co-exist in the plaques, something which had never before been reported.

The next step for the team is to look directly in human brain tissue rather than extracted amyloid plaque cores, and also to explore additional transition metals. Elsewhere, clinical trials with iron modifying drugs are underway for Alzheimer’s disease, so this work will be invaluable for the interpretation of the outcomes of these trials.

To find out more about I08, or to discuss potential applications, please contact Dr Burkhard Kaulich: burkhard.kaulich@diamond.ac.uk