The expanding field of spintronics promises a new generation of devices by taking advantage of the spin degree of freedom of the electron in addition to its charge to create new functionalities not possible with conventional electronics. The giant magnetoresistance (GMR) effect (2007 Nobel Prize in Physics) is a paradigmatic example of a spintronics application. As the interface between the magnetic and non-magnetic materials is a key component of any such device, it is crucial to characterise and understand both the surface and bulk electronic and magnetic properties.

In a recent publication in Nature Communications, a joint venture between theorists, experimentalists and sample growers led by a group from National Research Council (CNR) Trieste, Italy, reports a systematic photoemission spectroscopy study of two representative materials for spintronics applications, (Ga,Mn)As and La1-xSrxMnO3. Using the photon energy of the incident synchrotron radiation from the Surface and Interface Structural Analysis beamline (I09) at Diamond Light Source as a depth-profiling tool, they were able to quantify the variation in the strength of the magnetic order and the electrical conduction from the surface down into the bulk of the material. This study establishes the different properties of the surfaces compared with the bulk and the characteristic ‘critical’ depths needed to restore bulk properties, which are crucial pieces of information for the design of any spintronic devices based on these materials.

Tweet
Materials challenge for spintronics applications
Modern electronics rely on the ability to control currents in solid state devices such as transistors and diodes. However, in addition to their charge, electrons possess another quantum mechanical property known as ‘spin’, which is responsible for the phenomenon of magnetism. In materials used for conventional electronics, such as silicon, the spin is a redundant degree of freedom, but the goal of the emerging field of spintronics is to be able to create devices in which both the charge and spin currents can be controlled simultaneously, allowing for a new generation of logic and memory devices.
Any potential spintronic device will need to incorporate a material that is both magnetic and electrically conducting, enabling the propagation of a ‘spin current’. Broadly speaking, two ‘doping’ approaches to this materials challenge are conceivable – either by introducing magnetic elements such as manganese into an otherwise non-magnetic semiconductor, such as (Ga,Mn)As, or by introducing extra carriers by, for example, replacing some lanthanum atoms with a strontium one, thereby donating one additional electron in La1-xSrxMnO3; in both cases, one may induce magnetism. By control of the chemical composition, it is possible to tune and optimise the bulk properties of the material, including the carrier density and the critical temperature below which the material is magnetic (or to be precise, ferromagnetic). However, if these materials are to be used in practical devices, they will be used in interfaces with other components, and therefore it is crucially important to also understand how the properties of the surfaces of the material may differ from the behaviour deep in the bulk of the sample. Moreover, it is paramount to quantitatively determine the length scale over which the fully bulk-like properties develop. 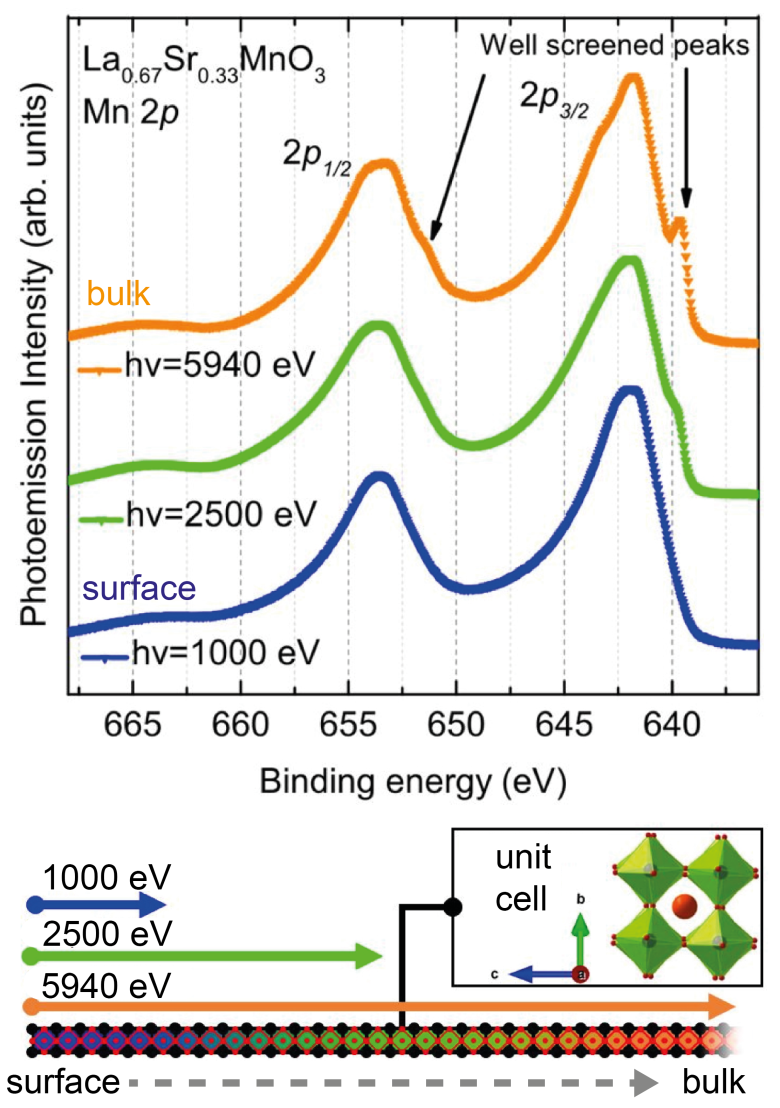 Figure 1: Top: photoelectron spectroscopy measurements of La0.67Sr0.33MnO3. The narrow “well-screened peaks” marked by the black arrows are interpreted as a signature of the metallic behaviour, and are much more pronounced in the most bulk-sensitive measurement (orange curve). Bottom: schematic of the depth-profiling effect of changing the photon energy.
Depth-dependent information from photoelectron spectroscopy at I09
Experimentally extracting depth-dependent information on the metallic character of the electrons is no easy feat. However, theoretical calculations performed as part of this study established that the degree of ‘metallicity’ could be indirectly probed via a measurement known as photoemission spectroscopy. These calculations were carried out by Professor Gerrit van der Laan from Diamond and Professor Munetaka Taguchi from Spring8 and NAIST, Japan. In this technique, a beam of X-rays is shone onto the sample of interest, kicking out electrons which are referred to as the photoelectrons. The energy profile of these photoelectrons reveals information on the electronic states inside the sample, and it was shown that a narrow ‘satellite’ feature located next to the more conventional peaks arising from electrons in a particular ‘2p’ shell of manganese could be interpreted as a clear fingerprint of the presence of metallic behaviour.

Since the photoelectrons have to exit the sample through its surface in order to be detected, one might expect that the technique would be most sensitive to electron states near the surface of the sample. This is generally true, but by tuning the energy of the incoming X-ray beam one can vary the characteristic length scale which is being probed in the measurement. With higher energy X-rays, the ejected photoelectrons also have higher energy, and can exit the sample from deeper inside the material.

This is where the Surface and Interface Structural Analysis beamline (I09) at Diamond Light Source comes in. I09 is a highly versatile beamline, in which photoelectron spectroscopy measurements may be performed with excellent resolution, high beam intensity, and — crucially for this study — a uniquely wide range of X-ray energies. These features give the researchers the opportunity to measure either surface sensitive at low energies, or to use high energies to see deep into the bulk of the sample, with all other experimental considerations held constant (note that ‘deep’ in this context is still about 500 times smaller than the width of a human hair!). “In our measurements at I09 we were able to quantify and track the fine details of the electronic structure within the same material as a function of depth, from the surface into the bulk” described Tommaso Pincelli, a PhD student from CNR, Trieste and a lead author of the study.
Material-dependent length scales – but the surface is always different
By performing these energy-dependent photoelectron spectroscopy measurements on (Ga,Mn)As and La1-xSrxMnO3, the researchers were able to demonstrate that the metallic behaviour in the bulk was strongly suppressed at the surface. The two different materials showed different characteristic length scales needed to develop bulk-like properties: 1.2 nm and 4 nm respectively. These are crucial parameters for designing any spintronic devices based on these materials: it is not only necessary that one can engineer the physical atomic structure with sub-nanometre precision, but the variation of electronic properties over these length scales is also important.  “These electronic length scales are quite significant and must be taken into account in the design of any future devices” concluded Dr Giancarlo Panaccione, the corresponding author of the study.

To find out more about the I09 beamline, or to discuss potential applications, please contact Principal Beamline Scientist Dr Tien-Lin Lee: Tien-Lin.Lee@Diamond.ac.uk.