A fruitful collaboration between scientists at GlaxoSmithKline (GSK) and the University of Edinburgh has yielded a series of potential new inhibitors to treat acute pancreatitis. The pioneering work, published in Nature Communications, was guided by structural observations from one of the Macromolecular Crystallography beamlines (I04-1) at Diamond Light Source.

Kynurenine-3-monooxygenase (KMO) is an enzyme involved in tryptophan metabolism, which is associated with neurodegenerative disorders and acute pancreatitis. Despite being an important metabolic enzyme and potential drug target, the crystal structure of full length KMO had not been solved. Furthermore, there are no clinically approved KMO inhibitors available so treatment options are limited for patients with these disorders.

The application of the I04-1 beamline allowed a team of scientists to successfully design a series of novel inhibitors against KMO. By attempting to fill space within the active site to improve affinity, the team created a unique set of inhibitors with unexpectedly high potency that tilted the FAD cofactor of KMO. As well as identifying a potential preclinical candidate for further development, the study demonstrated the importance of the tilted flavin cofactor in optimising the inhibitors’ pharmacological properties. The tilted conformation was an unprecedented discovery and could be a novel inhibitory approach for other enzymes of this class. 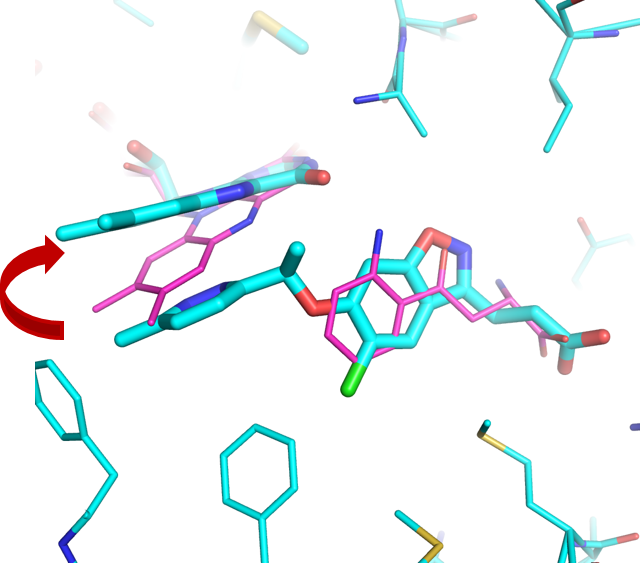 Need for an inhibitor
KMO is a class A flavoprotein monooxygenase (FPMO) that catalyses the hydroxylation of L-kynurenine (L-Kyn) to 3-hydroxykynurenine (3-HK) using NADPH as a co-substrate. The product, 3-HK, is a neurotoxin that contributes to neurodegenerative disorders and can also induce apoptotic cell death in endothelial cells. As such, KMO has been implicated in Huntington’s and Alzheimer’s diseases, and more recently in acute pancreatitis multiple organ dysfunction syndrome (AP-MODS).

An estimated one in five cases of AP-MODS are fatal, so there is a clear need for a new therapeutic approach. Driven by this stark statistic, a joint effort between industry and academia sought to improve the outlook for acute pancreatitis patients. Principal investigator of the study and director of structural and biophysical sciences at GlaxoSmithKline, Dr Chun-Wa Chung explained the motivations of the team: “While KMO has been a pharmacological target for neurological disorders for some time and many people have been trying to make inhibitors that are substrate-inspired, based on how kynurenine might bind, nobody has had a substrate structure to guide them before.”

Space in the protein
The scientists focused all their structural investigations on KMO from a bacterial source because its human counterpart could not be crystallised. Their structural observations were validated by an array of in vitro experiments using the human form of KMO alongside the bacterial form.

Initially, the Edinburgh team solved the crystal structure of KMO bound with its natural substrate at a resolution of 1.5 Å, which was the first time this had been visualised. By exploring this structure the GSK team set to work devising a series of KMO inhibitors. They noted a space in the protein that they could fill with extra chemical moieties to improve affinity, and a potent series of inhibitors were created.  “We used I04-1 because it is very reliable and effective at gathering lots of insightful information on protein ligand complexes,” explained Dr Chung. “Crystallography was used to drive structure-based drug design to get more potent compounds that were more likely to be clinically effective.”

Tilting upwards
Amazingly, the team found that instead of filling the empty space in KMO with their new inhibitors, they actually shifted the flavin cofactor so that it tilted upwards. The tilting effect resulted in favourable properties such as increased potency and residence time. Moreover, unlike previous substrate-inspired KMO inhibitors, the new class of inhibitors did not result in the production of peroxide.  These results are revolutionary in terms of drug design, and in fact one of the inhibitors tested is undergoing preclinical evaluation to potentially become a candidate for further development.

“This is the first published example of a compound that inhibits KMO without stimulating peroxide production, and it is also the first example in this class of enzyme where the tilting movement has been seen. Furthermore, we have shown that there may be benefits in inducing this tilting motion for the design of inhibitors,” concluded Dr Chung.

The new class of KMO inhibitors has been shown to be effective in animal models of acute pancreatitis and work is already underway to continue developing these promising new inhibitors.

To find out more about the I04-1 beamline, or to discuss potential applications, please contact Principal Beamline Scientist Prof Frank von Delft: frank.von-delft@diamond.ac.uk