Clathrate hydrates (Fig. 1) are cage-like structures of water molecules that house guest gas species. They form when the gas interacts with ice under high-pressure and low-temperature conditions, and are thought to influence the surface geology and composition of icy bodies in the Solar System. Although the importance of clathrates has long been recognised, previous studies of their formation and physical properties have mostly involved theoretical thermodynamic calculations for structures produced from pure water solutions. In new research, published in Astronomy & Astrophysics, however, carbon dioxide (CO2) clathrate hydrates produced from weak saline solutions have been investigated. The team of researchers, including PhD student Ms Emmal Safi, used the High Resolution Powder Diffraction beamline (I11) at Diamond Light Source to conduct an in situ study of clathrates that are more relevant to those produced in the salty oceans of icy moons. The results indicate substantial differences in the formation characteristics and physical properties of CO2 clathrates compared with those that form from pure water solutions. The new findings can be used to help calibrate and inform models of clathrate formation on Earth, and other planetary bodies. 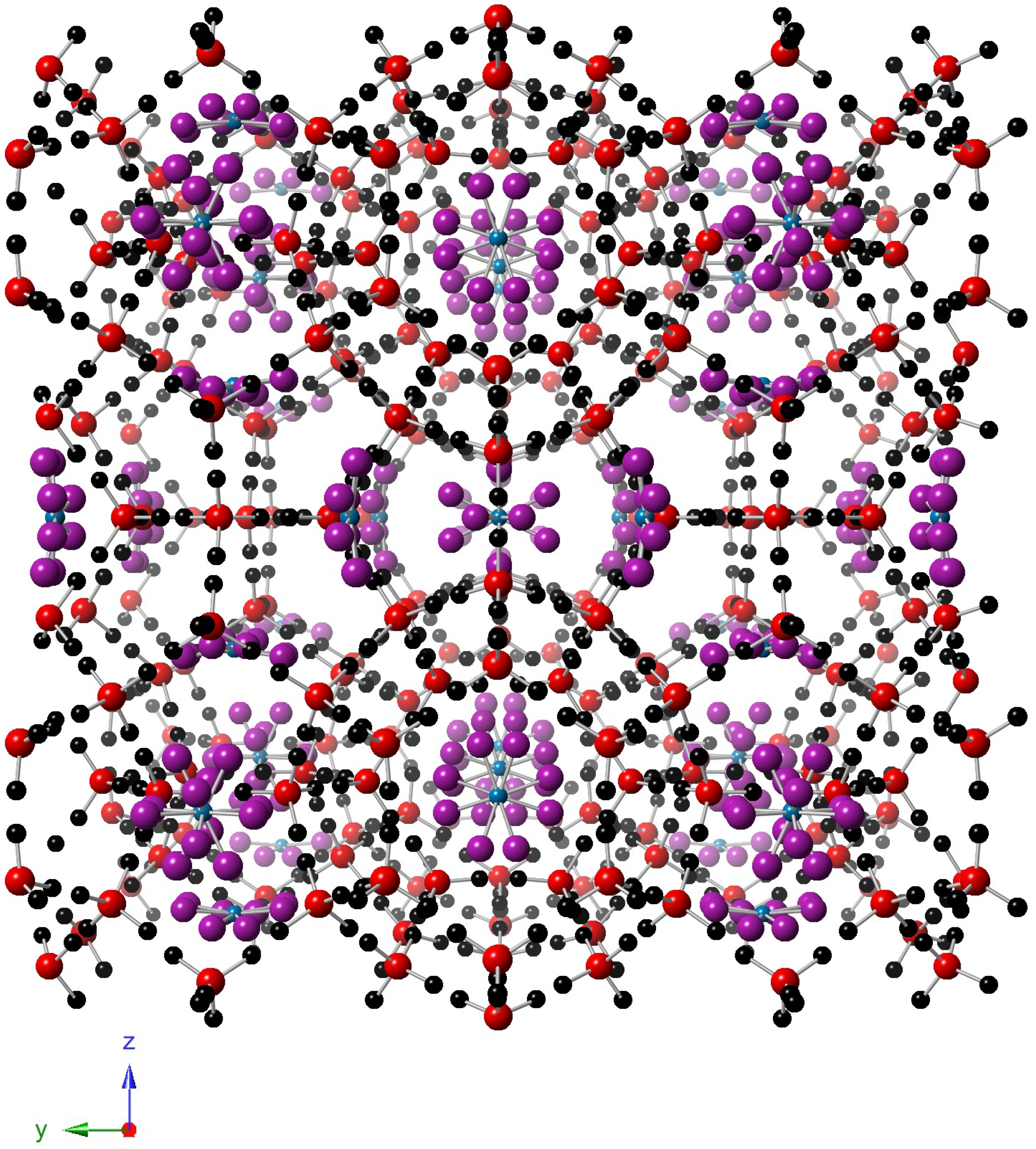 Clathrates in the outer Solar System

Remote sensing of Saturn’s moon Enceladus has revealed that both water ice and CO2 are present on its surface1, and it is a potential habitat for extraterrestrial microbial life. In addition, conditions on this moon—or other icy satellites—may promote the formation of clathrates. Indeed, the release of gases (e.g. CO2) from the putative clathrates has been suggested2 as the source of gas plumes emanating from the surface of Enceladus.
The formation of clathrates influences the composition of both the ocean from which they form and the ice crust that they produce. The physical properties of these structures are therefore important pieces in the puzzle of icy moon geology. Clathrate hydrates, however, are “notoriously difficult to study in the laboratory because they are often hard to make on demand”, explains Dr Stephen Thompson, Senior Beamline Scientist for I11 and co-investigator of this study. Until now, experimental measurements of such clathrates under physically relevant, planetary analogue conditions have therefore been lacking. Furthermore, the thermodynamic calculations that are generally used to model the physical properties of the structures can be problematic, because they cannot necessarily be extrapolated to the relevant pressure and temperature conditions.
Long-standing collaboration
In the new research, part of a PhD project jointly supported by Diamond and Keele University, the scientists used a specially developed experimental technique to measure the physical properties of CO2 clathrate hydrates under a range of conditions relevant to icy moons. They fabricated the CO2 clathrates in the laboratory from three frozen epsomite (a magnesium sulphate mineral) solutions, with the aim of replicating the salinity conditions of the oceans on these satellites. In situ synchrotron X-ray powder diffraction measurements of the clathrates were then made on I11 as the temperature of the samples was cycled between 90 and 250 K, in the 5–20 bar pressure range. The I11 beamline was chosen because of its simultaneous high resolution, in situ gas delivery, variable temperature, and rapid measurement capabilities. The resultant data thus allow the crystal structure of the clathrates to be probed as a function of temperature, pressure, and salinity.
The success of these experiments is “particularly exciting to the team”, says Dr Thompson, because “it is the latest step in a long-standing collaboration between Diamond and Keele University that stretches back to 2010”. For example, the application of the high-pressure gas cells and the experimental procedure used in this work are the product of research3 conducted by Dr Sarah Day during her PhD at Diamond and Keele University (Dr Day is now an I11 Senior Support scientist and a co-author of this paper).
Role of salinity
The experimental results indicate that CO2 clathrate formation occurs at lower temperatures in the epsomite solutions than in pure water ice equivalents. The data also, unexpectedly, show that the hexagonal polymorph of ice is dominant throughout the experiments, even though the cubic form is more thermodynamically stable at low temperatures. The team attributes this to the presence of epsomite in the solutions. The results further reveal that the density of the clathrates is pressure- and temperature-dependent, and that they have a higher density than the solutions from which they form. CO2 clathrates will thus sink, rather than rise, in a salty ocean and thus may not contribute directly to the formation of Enceladus’ gas plumes.
Implications and future work
This work highlights the need for experimental data in the study of clathrates under physically relevant conditions. Such observations are required, in addition to theoretical models, to fully understand these structures and to assess their potential on Earth as a fuel source (e.g. methane clathrates) or for carbon sequestration. As part of their ongoing work, the team will soon be conducting similar experiments on I11 to examine the physical properties of methane clathrate hydrates formed in ammonium sulfate solutions, which are relevant to study of Titan, Saturn’s largest moon.
To find out more about the I11 beamline, or to discuss potential applications, please contact Principal Beamline Scientist Prof Chiu Tang: chiu.tang@diamond.ac.uk.